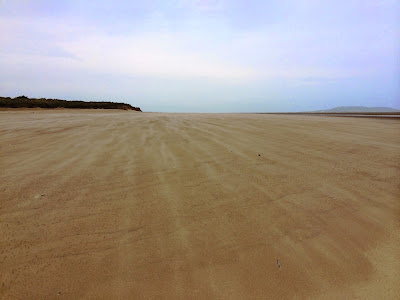 The northerly winds blew the sands along the beach in Donabate this afternoon like the sands in an Arabian desert scene (Photograph: Patrick Comerford, 2014)

The results from local elections in both Ireland and England bring some depressing news. Counting in the European elections only begins tomorrow, but if the trends continue we could see further gains by ultranationalist parties, Sinn Fein.

Whether ultranationalists pose as parties of the left or as populists on the right, they remain ugly manifestations of ideologies that are anything but ideal or moral. Surely the commemorations and remembrances of World War I, beginning this summer, should remind us of the evil of nationalism and the need for Europeans to live closer to one another.

Ironically, although they claim to stand at opposite ends of the political spectrum, find expression for their nationalism in their rejection of the ‘outsider’ – however they search for a definition of that ‘outsider’ – and their urge to restrict who should be entitled to the benefits of living within society.

Both are strongly anti-European. Ironically, UKIP on the right has more in common with the far-right in Greece, France, the Netherlands, Belgium, Germany, Austria and Hungary, than with the centuries-old traditional parties in Britain, while Sinn Fein, although posturing on the left, fails to acknowledge that Europe has provided the best guarantees in legislation for the rights of women, children, workers and migrants.

Sinn Fein has its own ugly definition of what it is to be Irish; UKIP may yet have to redefine what it means by UK independence should voters in Scotland decide to opt out of the UK in September.

In both cases, defining what is to be English or Irish may soon lack the ability to be generous and inclusive because of these two extremes, which – like Scylla and Charybdis – have beaten and drowned out rational efforts to discuss an understanding of English or Irish identity.

It is frightening to think of an early election that would see Sinn Fein propping up an Irish government in 2016, just as the centenary of the 1916 Rising is being commemorated. It is frightening to imagine that a Scottish referendum could leave decades of people in England with governments on the right, perhaps even propped up by UKIP.

But I enjoy the idea of living between the riches of English and Irish identities and heritage and stories. Perhaps I can return later in another essay to examine what is the essence of being English today.

Last week, I had enjoyed some beautiful walks in the English countryside Lichfield. As I flew back into Dublin, I looked down on the peninsulas at Portrane and Donabate and at Malahide and Portmarnock, stretching out into the Irish Sea east of Dublin Airport, looking like two islands of fresh green fields fringed with golden sands.

After this week’s family funeral, I needed to clear my head. Initially I thought of going for a walk on the beach at Portrane; then I thought of sitting on the terrace outside the Waterside House Hotel beside the Martello Tower, sipping a glass of white wine and reading today’s Guardian or trying to finish Jeremy Paxman’s The English. 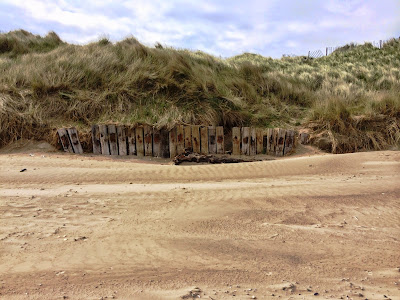 Walking the miles of sand on the beach in Donabate this afternoon (Photograph: Patrick Comerford, 2014)

Instead, I ended up walking the length of the beach at Donabate, from the Martello Tower to the southern top where the narrow estuary separates Donabate from Robswall and Malahide to the south.

Although there was some promise of summer earlier this week, the temperatures had dropped this afternoon, the skies were grey, the waves on the receding tide were choppy, and as I walked there was hardly anyone else on the beach.

There was a strong northerly wind behind my back and it blew soft yellow sand along the stretch of beach in front of me, like a scene from Lawrence of Arabia. Beneath my feet, the sand was soft and my feet sank ankle deep in its softness at times, slowing my steps and my pace.

Behind me to the north east was Lambay Island, in front of me to the south-east was Ireland’s Eye and Howth Head. 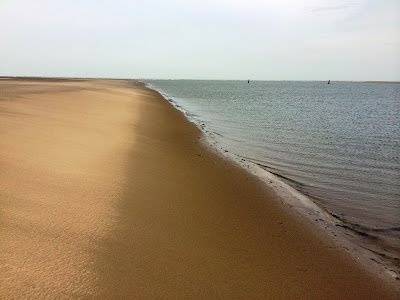 Standing at the estuary that separates Donabate from Robswall and Malahide (Photograph: Patrick Comerford, 2014)

I stood at the estuary mouth, forgetting the afternoon was passing, hoping to catch a little of the sunshine that appeared to be about to break through the clouds to the south-east.

I never sorted out the ideas going around my head about memory, family, grief and identity. I never had the glass of wine at Donabate. And I never found that hour to read looking out to the sea. 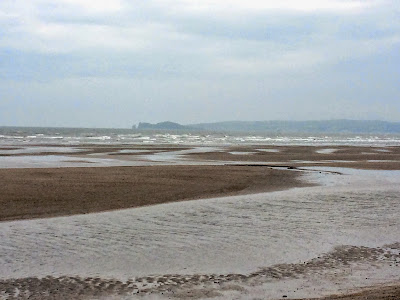 Identities and cultural comforts are folded in between deep layers and tones in the sands of time (Photograph: Patrick Comerford, 2014)

But two of us went to dinner this evening in Aner, the Persian restaurant in Terenure. I briefly thought that the Persian music in the background could have been modern Greek or Turkish music, then realised how much I have been influenced by the music of Ross Daly.

Identities and cultural comforts are folded in between deep layers and tones that we often find difficult to access, let alone understand, covered and lost in the sands of time. 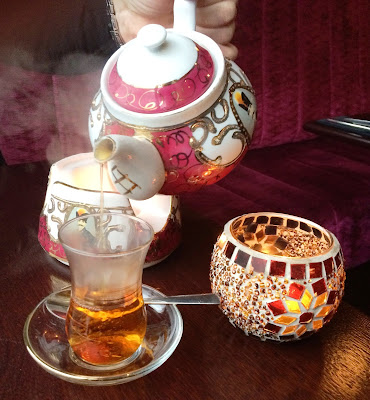 Posted by Patrick Comerford at 22:43 No comments: