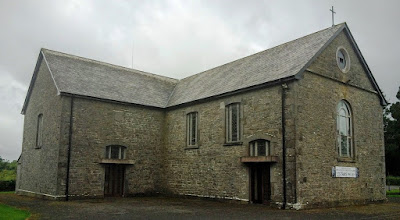 Coole Church in Co Westmeath was built in 1841 by the Dease family … Mary Elizabeth Dease married the future Earl of Gainsborough here in 1880 (Photograph: Patrick Comerford, 2016)

When Mary Elizabeth Dease married an English aristocrat and cousin of Queen Victoria in the little church in the small village of Coole, near Castlepollard, Co Westmeath, on 2 February 1880, few of the local farmers and villagers could have realised that this was one of the great fashionable and social weddings that marked the beginning of the decline of the Victorian era.

It is a story that is interwoven intimately with the stories I told last week of the elopement of Lady Blanche Noel and her Irish-born music tutor Thomas Murphy in 1870, the wedding of Sir Henry Bellingham and Lady Constance Noel in 1874, and the grand society wedding of Ida Bellingham and the Marquis of Bute at Bellingham Castle in 1905.

Last Sunday [7 August 2016], three of us visited Longford to see the renovation and restoration of Saint Mel’s Cathedral. On our way back to Dublin, we stopped at Coole, where Mary Elizabeth Dease was married, and Turbotstown House, her family home at Coole on the road between Edgeworthstown and Castlepollard, about 12 miles north-west of Mullingar.

Mary Elizabeth Dease was married in her home church in 1880. It did not have the status of a parish church, but was a ‘chapel of ease’ built to serve her father’s estate, Turbotstown House, and the neighbouring shopkeepers, publicans, villagers, tenant farmers and estate workers.

It was a status symbol in the late 18th and early 19th century for the large estates in neighbouring counties of Meath and Westmeath to have their own estate churches at the castle gates. Following Catholic Emancipation in 1829, the Dease family of Turbotstown was not going to be outdone by their neighbours, such as the Pakenhams, Earls of Longford, who lived nearby at Tullynally Castle, the O’Reillys and Nugents of Ballinlough Castle, and the Levinge family of Knockdrin Castle. 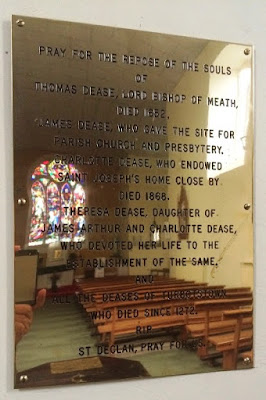 A plaque to the Dease family in Coole Church (Photograph: Patrick Comerford, 2016)

The Dease family lived at Turbotstown and the Coole area from before 1272, and claimed to be descended from the Celtic royal family of the Decies in Co Waterford who had migrated to Meath and Westmeath, with Saint Declan of Ardmore as their patron saint. They held on to their estates throughout the Penal Laws although they were Roman Catholics. The family included famed scholars, soldiers, priests and bishops. Thomas Dease, who was a founding member of the Irish College in Paris, later became Bishop of Meath (1621-1652). The present Turbotstown House occupies the site of an earlier castle marked on the Downe Survey Map of the area (1654-1656). In the following century, Dr William Dease was a founding member of the Royal College of Surgeons in Dublin in 1784.

As the fourth son in a large family, Garrett Dease may not have expected to inherit Turbotstown, but a series of coincidences, including a fall from a horse and a childless marriage, the family estates passed to him in 1771. He married into the family of Saint Oliver Plunkett, the martyred Archbishop of Armagh, and eventually when he died in 1790 Turbotstown House and the Coole estate were inherited by his son, Gerald Dease (1790-1854).

Gerald Dease probably brought the architect Francis Johnson (1760-1829) to Coole to redesign and rebuild Turbotstown House sometime after 1810. Johnson also designed the GPO in Dublin, the Chapel Royal in Dublin Castle and the Armagh Observatory. He was working nearby at Tullynally Castle at the time and so became involved in designing Turbotstown House too. The central rotunda is a device that Johnston included in a number of his designs for country houses at this stage of his career.

The main part of the house was built or rebuilt in 1810-1840, so work continued long after Johnson’s death. Turbotstown House is set back from the road in extensive mature grounds with a substantial complex of outbuildings to the rear and the west, the remains of a walled garden to the west and the main entrance gates and the remains of a gate lodge to the south.

This 19th-century country house is built in a Greek Revival style and retains its early character and form. It is a detached, three-bay two-storey country house, with a projecting single-bay entrance front with a raised parapet over it and a single-bay cut limestone tetra-style Greek Ionic entrance porch at the centre of the main façade. Above the entrance porch there is a central Wyatt window on the first floor.

With the restoration of Turbotstown Castle completed, Gerald Dease set about building a church on land he donated. 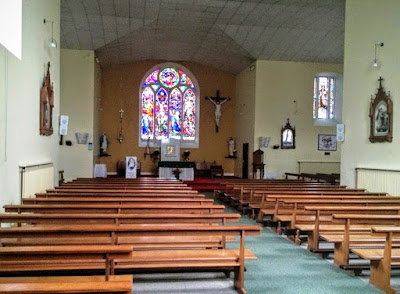 Inside the church built in Coole in 1841 by Gerald Dease (Photograph: Patrick Comerford, 2016)

The church Gerald Deasebuilt in Coole in 1841 is set back from the road, and is typical of the plain, T-plan chapels built in great numbers in the Irish countryside at the time of Catholic Emancipation (1829).

However, its design has slightly higher quality details, probably because of the patronage of the Dease Family. The round and segmental-headed openings are in contrast to the usual lancet or point-arched openings in churches of the same era in Co Westmeath and give the church a vaguely classical appearance.

The church has a two-bay nave and single-bay transepts to the east and the west (liturgical north and south). It is built of coursed rubble limestone over a chamfered dressed limestone plinth, with flush dressed limestone quoins to the corners.

There is a projecting cut-stone string course to the north (liturgical west) gable of the nave, and a cut-stone date plaque to the north face of the west transept. The segmental-headed openings to the east and west sides of the nave have dressed limestone surrounds and stained glass windows. 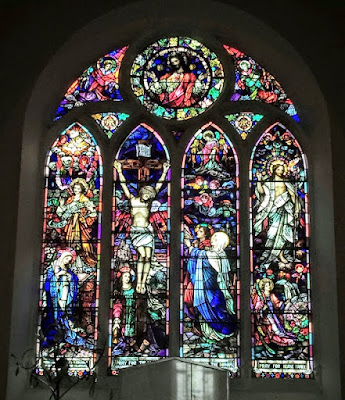 The church was extensively renovated around 1976 by the parish priest at the time, Father Patrick Fagan. The pitched natural slate roofs, which were re-slated during those renovations, have over-hanging eaves with a wrought-iron cross finial above the entrance gable at the north or liturgical west end. The church remains an appealing small-scale mid-19th church, and retains its early character to the exterior despite extensive alterations in the 1970s.

When Gerald Dease died in 1854, Turbotstown House and the Coole estate were inherited by his eldest son, James Arthur Dease (1826-1874). James married Charlotte Jerningham, a cousin of Lord Stafford, and they had a large family of 12 children, 10 daughters and two sons.

Charles was a brother of Lady Constance Noel, who married Sir Henry Bellingham of Bellingham Castle, Co Louth, in 1874, and of Lady Blanche Noel, who scandalised her father in 1870 when she eloped with her Irish-born music tutor, Thomas Murphy. When he married Mary Dease in Coole it was his second marriage: his first wife, Augusta Berkeley, had died at the birth of a daughter, Lady Agnes Noel, in 1877.

So this was the third Irish marriage among the Noel siblings. Their mother, the former Lady Ida Hay, had been a bridesmaid in 1840 when her cousin Queen Victoria married Prince Albert, and Mary Elizabeth’s parents-in-law caused a sensation when, at the height of the Tractarian Movement, they joined the Roman Catholic Church in 1850.

A year and a half after the wedding in Coole, the bride’s father-in-law, Charles George Noel, 2nd Earl of Gainsborough, died on 13 August 1881, and Mary Dease became the Countess of Gainsborough as her husband succeeded to his family titles as 3rd Earl of Gainsborough. They lived at Exton Hall in Rutland, where Exton Park was the largest estate in England’s smallest county. 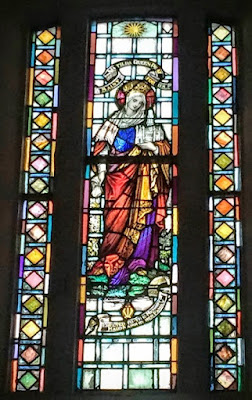 One of these unmarried sisters, Teresa Dease, continued living in Coole. There in 1905 she opened a school to train young girls as domestic servants. She later closed the school and on the same site started Saint Joseph’s Hospital for physically disabled boys in 1916. 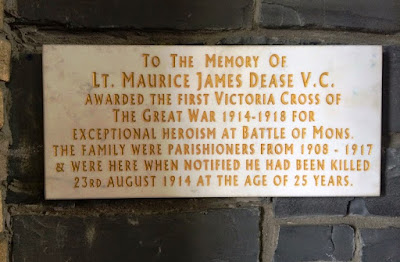 Meanwhile, when the future Lady Gainsborough’s father, James Arthur Dease, had died in 1874, his estates were inherited by her young brother, his elder son, Major Gerald Dease (1854-1934), who was then only a 19-year-old.

The second son, Edmund Fitzlaurence Dease (1856-1934), who wrote the History of The Westmeath Hunt (1898), married Kate Murray from the Cork distillery family. Their son, Lieutenant Maurice James Dease (1889-1914), was educated at Stonyhurst College, the Jesuit public school in Lancashire. He was killed in one of the first battles of World War I, the Battle of Mons in Belgium on 23 August 1914, while providing cover to allow his comrades to escape to safety. He was not yet 25, and he became the first person to be awarded the Victoria Cross posthumously for bravery in World War I.

Maurice James Dease was buried at Saint Symphorien Military cemetery, 2 km east of Mons. He is commemorated by a cenotaph in the church grounds in Coole, and on a plaque in the Church of Saint Martin of Tours in Culmullen, Co Meath. He was also named on a bronze plaque inside the church in Coole, but this was removed during Father Fagan’s renovations in the 1970s.

His father and uncle survived him for 20 years, until 1934. Although Maurice Dease had a sister who married, there was no male heir in the Dease family, and Turbotstown House and the Coole estate were sold in 1926. That year, Mary Dease’s husband, Charles Francis Noel, 3rd Earl of Gainsborough, died at the age of 70, and he was buried in a large tomb erected by his wife in the Noel family’s private chapel at Exton Hall, dedicated to Saint Thomas of Canterbury.

Lady Gainsborough continued to live at Exton Park in Rutland. When she died at the age of 82 on 17 November 1937, she was buried with him. The inscription on her tomb says: ‘Blessed are the pure of heart for they shall see God. She who scatters the seed of happiness around verily shall it be flowering in her heart.”

The Dease family had managed to hold on to their lands and privileges in Co Westmeath, surviving the changes of the Reformation, the Cromwellian era, the Battle of the Boyne, the Penal Laws and the Great Famine. But the Victorian and Edwardian eras had come to a close, and the events of World War I and the Easter Rising 1916 had irreversibly changed the social order in both England and Ireland. The presence of the Dease family in Co Westmeath had come to an end after seven centuries.

The school founded by Lady Gainsborough’s sister, Teresa Dease, closed in 1981 and is now in ruins. But a banner proclaims that the church, built by the Dease family in 1841, is celebrating its 175th anniversary in 2016. Inside the church is a late mediaeval font that was once located in the neighbouring Church of Ireland parish church, and that was donated when Saint Nicholas’s Church closed.

● When the church was built in Coole by the Dease family in 1841, it was named Saint Mary’s. It was still known as Saint Mary’s when Mary Dease was married there in 1880. However, the banner on the church celebrating the 175th anniversary of its building names it as the Church of the Immaculate Conception, a dogma not declared by the Roman Catholic Church until 1854, 13 years after the church was built. 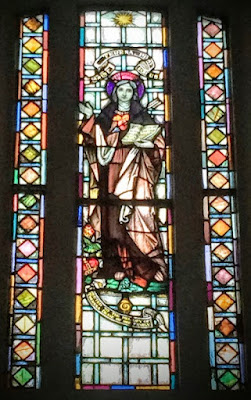