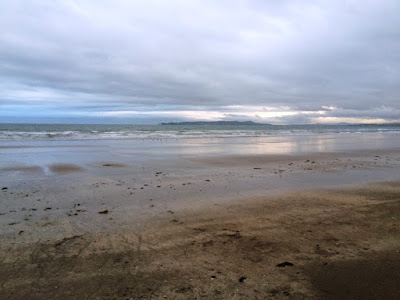 Walking on the beach in Donabate in the rain and in fading lights of evening (Photograph: Patrick Comerford, 2015)

Over the past few weeks, a large number of students have been ordained in dioceses throughout the Church of Ireland, and many of them returned as Year III students in the last few days, with full-time students returning yesterday [21 September 2015] and part-time students taking part in a residential weekend from Friday until Sunday.

Summer was joyfully filled with a week’s stay in both Rethymnon in Crete and Giardini Naxos in Sicily, a study week in Sidney Sussex College, Cambridge, a preaching visit to Lichfield, a conference in Hertfordshire, a weekend in Trumpington, walks in the countryside near Lichfield and Hoddesdon, and working visits to London.

But I have missed the regularity and stability of the daily offices in the chapel of the Church of Ireland Theological twice a day that are part of academic year, and there was a spiritual comfort in leading Morning Prayer in the chapel yesterday.

A busy working weekend with the part-time students came to its climax with two of this year’s final ordinations, when two deacons were ordained in Christ Church Cathedral, Dublin.

The questions put to the candidates by the bishop before they are ordained deacons are a challenge and reminder of my own commitments 15 years ago.

Bishop: Will you be faithful in visiting the sick, caring for the poor and needy, and helping the oppressed?

Bishop: Will you promote unity, peace, and love among all Christian people, and especially among those whom you serve?

Every time I speak up for the refugees in migrants, for the homeless and the impoverished, for the victims of war and those forced into exile, I am being faithful to those commitments and promises I gave in Christ Church Cathedral before my ordination. 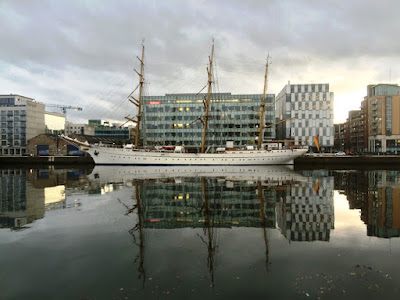 The ordinations in the afternoon came after a busy working weekend, and as I left the cathedral darkness was beginning to close in and it was raining. As we drove through the city centre and along the banks of the River Liffey, a lone German yacht was casting long evening shadows on the waters of the river. Autumn has settled in and summer is sorely missed and surely gone.

It was just a week or so since I had been walking on the beach in Rethymnon each day and swimming in the warm blue waters of the Mediterranean in Crete. I was missing those summer beach walks, and two of us headed out to Donabate for a walk in the rain.

We had already arranged to meet two cousins from the Lynders side of the family who were on a quick weekend visit to Portrane and Donabate before travelling on to Tuscany. It was two years since we had last met, but a tightly-packed weekend left little time for this get-together.

But there was still time to steal a walk in the rain on the beach in Donabate. The tide was out, but the waves were choppy, and just as darkness was about to close in I had the beach all to my own.

Despite the approaching darkness, the rain and the clouds, there were clear views towards Lambay Island to the north and Howth Head to the the south.

In the rain and in the twilight, there were shards of silver and gold shining in the wet stretches in the long golden sand.

Later, as we sat in the Waterside House Hotel looking out at the decking as twilight turned to darkness, there were no doubts that summer has passed. But we enjoyed the sound of the rain and the waves breaking against the rocks below us. 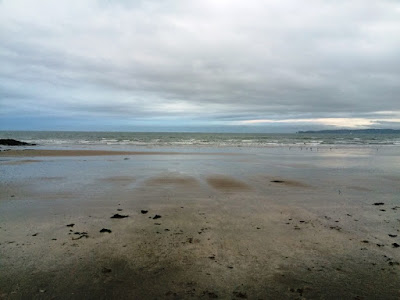 Twilight in the ain on the beach in Donabate (Photograph: Patrick Comerford, 2015)