Blades and boats on the beach at Bray

Watching the women’s race in Bray Regatta from the seafront this afternoon (Photograph: Patrick Comerford, 2013)

It’s only a few days since I wrote about messing about in boats on rivers and my regrets that I had never learned to sail, scull or row. It is, as I said last week, a Wind in the Willows thing for me.

But rowing on rivers is quite a different sport from coastal rowing. Still, it was a pleasant surprise when I went to Bray for a short walk on the beach this afternoon that the Bray Regatta was taking place today [30 June 2013].

After the Cathedral Eucharist in Christ Church Cathedral this morning, five of us went for a lingering lunch in Beirut Express in Dame Street that continued until 3.30 p.m.

It looked as though it might rain, but two of still decided to head out to Bray for an ice cream and a short walk on the beach.
School summer holidays mean that Bray is going to be crowded on Sunday afternoons for the next few weeks. And that crowding is compounded by confusion created by new road markings, parking lots and a new cycle path that are all still in the middle of construction and being laid out. 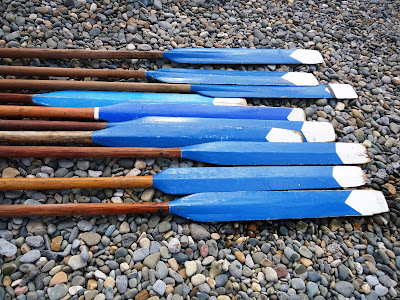 Blades on the beach at Bray this afternoon (Photograph: Patrick Comerford, 2013)

As we walked along the promenade, we had a fine view of the regatta, which was based on the southern end of the seafront. Bray Regatta normally takes place in July, so this was additional afternoon delight.

According to local tradition, coastal rowing involves crews of four with one sweep oar each, and a coxswain, in wooden clinker-built boats. The East Coast Rowing Council was formed in 1936, and looks after rules about the sizes and weights of skiffs, regatta dates, ensuring races are fair, and so on for clubs in Co Dublin, Co Wicklow and North Wexford.

Clinker skiff-type boats were once working boats along the east coast, and skiff racing has its origins in hobbling. Hobblers were freelance pilots, and competition was strong among them to be the first to board approaching ships between Lambay Island and Wicklow Head.

Hobbling involved considerable risks and required considerable skills on behalf of the oarsmen. This explains the origins of rowing clubs around the old pilot stations at Ringsend and East Wall in Dublin Port, Dun Laoghaire, Dalkey, Bray, Greystones, Wicklow, Arklow, and Courtown.

These clubs can be seen training along the East Coast between April and September in racing skiffs that are 25-ft long (7.6 m), clinker-built, double-enders. 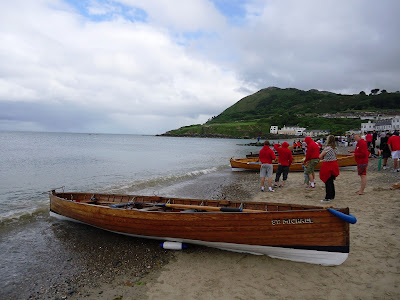 Clinker skiff-type boats on the beach at Bray during this afternoon’s regatta (Photograph: Patrick Comerford, 2013)

Bray Rowing Club hosted today’s regatta on the southern end of the Seafront, with men’s and women’s crews from other clubs, including Dun Laoghaire and Wicklow, taking part.

Bray Rowing Club is one of the oldest clubs, and took part in the Dalkey Regatta in 1875. It was a successful club in the 1930s, but went into decline during World War II. The club was revived in the early 1950s, and was re-established in 1970.

The Bray Regatta normally takes place in July, but for some reason it was moved to the last Sunday in June this year.

We walked back from the southern end of the beach along the shoreline as the women’s race was taking place. There was a swell in the water but the rain held off, as the rolling waves were gatling along the beach in quick succession in a sweep from south to north. 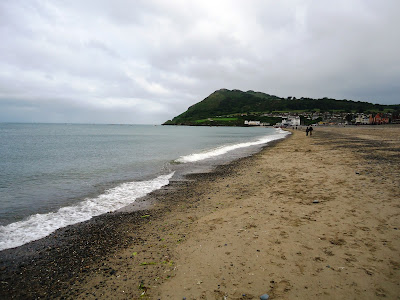 3038 Walking along the beach in Bray this afternoon (Photograph: Patrick Comerfo9rd, 2013)