Is God found in Genesis
on the seventh day,
beyond time and space?

‘God saw everything that he had made, and indeed, it was very good’ (Genesis 1: 31) … sunrise on the mouth of the River Slaney at Ferrycarrig, Co Wexford (Photograph: Patrick Comerford)

Tomorrow is Trinity Sunday in the Church Calendar, and the first reading in the Revised Common Lectionary is a lengthy account of the seven days of creation. Earlier this morning, I was revising and putting finishing touches to the sermon I have prepared for tomorrow morning (7 June 2020), and I wondered what, if any, is the any significance in the numbers three and seven?

I often use the Authorised Daily Prayer Book edited by Rabbi Jonathan Sacks in my daily prayer, in the morning and at night. In his introductory commentary, ‘Understanding Jewish Prayer,’ he discusses how many of the prayers in Jewish tradition have a three-part structure, and gives examples from the weekday Amidah, which is composed of three parts.

He also discusses how the number seven is significant and it always indicates holiness, as in:

Lord Sacks says that seven in Judaism is not a simple prime number. It is the ‘one-after-six.’ Six represents the material, physical and secular, he says.

He points out that ancient Mesopotamia, where Abraham came from, used a numerical system based on the number six. He shows out Western civilisation still bears traces of this in:

All of these, he says, originated in astronomy, at which the ancient Mesopotamians excelled.

Judaism acknowledges the six-part structure of time and space, but adds that God exists beyond time and space. Hence, seven – the one beyond six – became the symbol of the holy.

Six, too, is not a simple number in Judaism, Lord Sacks writes, and he points out how this becomes obvious when we carefully read the story of creation in Genesis 1.

On the second three days, God populated these domains, each with its appropriate objects or life-forms:

‘The seventh day, Shabbat, is holy because it stands outside nature and its causal scientific laws.

Later, he points out that many prayers are constructed in a pattern of fours, with four-line verses, each of four words. Often these reflect Jewish mysticism with its four ‘worlds’:

Merkavah mysticism, based on Ezekiel’s vision of the Divine chariot, is an important strand of early rabbinic prayer.

The number 10 represents the 10 ‘utterances with which the world was created’ or the 10 places in Genesis 1 where an act of creation is preceded by the words ‘God said.’ Lord Sacks explains this is why Baruch She-amar, the blessing before the creation section of the prayers, begins with a ten-fold litany of phrases each beginning with the word ‘Blessed.’

Fifteen, he explains, represents the 15 steps between the courtyards of the Temple, the 15 Psalms beginning ‘A Song of Ascent,’ and the numerical value of the first two letters of God’s holiest name. Hence, there are 15 expressions of praise in the paragraph Yshtabach, 15 adjectives following ‘the Lord Your God, true’ at the end of the Shema in the morning, 15 psalms in the Verses of Praise on Shabbat and Festival mornings, and so on.

Lord Sacks concludes: ‘These are not mere aesthetic conventions like, for example, the fourteen-line sonnet form or the four-movement structure of a symphony. As always in Judaism there is a matching of form to content, structure to substance. The Sages – understood – as did the ancient Greeks, amply confirmed by modern science – that reality has a numerical structure. Mirroring this structure in prayer, we evoke the sense of a world of order in which we are called to respect differences and honour boundaries, accepting graciously the integrity of natural and moral law.’

Remembering the Holocaust in
a feature in the ‘Church Review’ 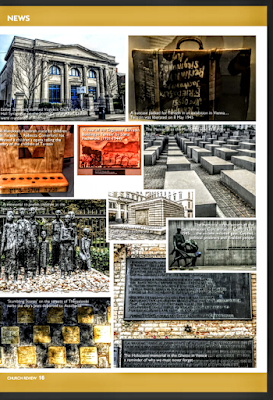 This year marks the 75th anniversary of the end of the Holocaust and the end of World War II.

To mark these solemn anniversaries, my monthly column in the June 2020 edition of the Church Review looks at these events in 1945. In words and images, I recall visits to many places associated with the Holocaust, including the death camp at Auschwitz and Sachsenhausen, the memorials and museums in Berlin, Vienna and Thessaloniki, and the ghettoes in Prague, Rome and Venice.

In this three-page illustrated feature, I also recall some of the Irish victims of the Holocaust and the details of the Nazi plan to wipe out the entire Jewish population of Ireland.

The Church Review is the Dublin and Glendalough monthly diocesan magazine. The current Covid-19 restrictions have created major problems for printing and distributing many magazines like this. However, the editor of the Church Review, the Revd Nigel Waugh of Delgany, has overcome these difficulties, making the magazine available online, while maintaining his high standards of editing and presentation.

But more about the 75th anniversary of the end of the Holocaust and World War II and my feature in the Church Review on this blog tomorrow afternoon.