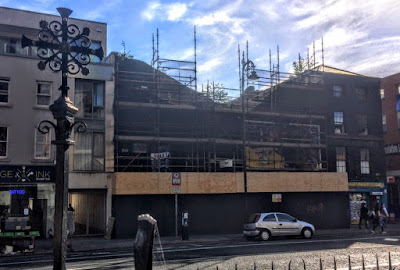 Last weekend, I brought a group of students on a field trip for the module on Liturgy, visiting Christ Church Cathedral, Dublin, and visiting two inner-city churches – the Church of Saint Augustine and Saint John, also known as John’s Lane Church, on Thomas Street, on Saint Catherine’s Church on Meath Street.

As we emerged from John’s Lane Church, I was struck by the cladding and scaffolding surrounding two buildings on the opposite side of Thomas Street.

The sad appearance of these two buildings stands as a commentary on the decline and public neglect of one of the oldest streets in the Liberties in the heart of the mediaeval city of Dublin.

The Liberties is an area that takes its name from the manorial jurisdictions dating back to the arrival of the Anglo-Normans in the 12th century. These areas were part of the city, but preserved their own jurisdiction or ‘liberties.’

The most important of these liberties were the Liberty of Saint Sepulchre, under the Archbishop of Dublin, the Liberties of Thomas Court and Donore, belonging to the Abbey of Saint Thomas and later called the Earl of Meath’s Liberty, and Saint Patrick’s Liberty. The smallest liberty was Christ Church Liberty, which covered an area of 0.65 ha.

Thomas Street is named after the Church of Saint Thomas, founded in 1175 near the present-day Saint Catherine’s Church. The Augustinian Friary of Saint Thomas was founded by William FitzAldelm, and the church was dedicated to Saint Thomas Beckett, who had recently been murdered in Canterbury Cathedral on the orders of King Henry II.

The church became a rich and powerful monastery, which controlled the Liberty of Thomas Court and Donore. In 1539, it was dissolved at the Reformation. From the mid-16th century the Lord of this Liberty was William Brabazon, ancestor of the Earls of Meath, who acquired the monastic lands at the dissolution of the monasteries.

The street runs from Cornmarket to Saint James’s Church and Saint James’s Gate at the west end of the mediaeval city, once associated with pilgrims leaving for the shrine of Saint James at Compostella. The street was originally Saint Thomas Street but the prefix was later dropped.

Thomas Street once had a strong tradition of brewing and distilling. The brewer Arthur Guinness lived on the street in 1759. John Power started distilling whiskey in Thomas Street in 1791, and Sir John Power laid the foundation-stone of the O’Connell Monument in Glasnevin Cemetery. Further along the street the Roe family also distilled whiskey, and Henry Roe used his personal fortune to underwrite the cost of restoring Christ Church Cathedral.

Thomas Street is one of only four streets in Dublin where street trading is permitted – the other three are Wexford Street, Henry Street, and Moore Street. Over the years the street had a rich variety of shops, from clothing, food, butchers, restaurants and bars.

But today Thomas Street is in a sad and sorry state. It is estimated that more than one-third of the buildings on the street are derelict, vacant or have been demolished, and local traders are worried that this figure will grow if urgent action is not taken.

About 1,000 people walk along Thomas Street each day, between Christ Church Cathedral and the Guinness Storehouse, but few find it welcoming or attractive. Thomas Street has the potential to become an attractive shopping street once again.

The image conveyed by Numbers 61 and 62 shows is typical of everything that works against these hopes and visions, and rare early 18th-century buildings, some hidden behind later Georgian façades, are in danger of being lost entirely.

Nos 61 and 62 Thomas Street are in an architectural conservation area, a planning control that aims to preserve the character of historic areas. They are now covered with cladding and scaffolding, are two of Dublin’s oldest buildings. But the Dublin Civic Trust has warned that they are in imminent danger of demolition unless the Minister for Heritage, Heather Humphreys, steps in to save them. The trust has appealed to Ms Humphreys to place a temporary preservation order on No 61 and 62 Thomas Street, pointing out that parts of these two buildings could date back to the late-1500s.

In 2009, Dublin City Council granted permission for the complete demolition and redevelopment of the buildings which have been largely derelict since the 1980s. In 2014, the planning permission was about to expire when it was extended until 2019. It was believed at the time the buildings dated from the mid-18th century, but little of the original fabric remained.

However, when work began in recent months on stripping out the building, significant post-mediaeval fabric was found behind the 20th century interiors, according to Graham Hickey, the conservation director of the Dublin Civic Trust.

‘The astonishing skeletal grid of ceiling beams and joists is still intact on the ground floor, as well as early brick walls with ancient embedded timbers,’ he is reported as saying. ‘With all of the modern partitions and ceilings now removed, the ground-floor shop retains all the grand scale one would expect of a public inn of the post-mediaeval period, complete with typical corner chimney stacks.’

He told The Irish Times last week: ‘There is absolutely nothing like this known to survive in Dublin, and very little comparable in the rest of the country.’

No 61 Thomas Street was once an inn called the Golden Last, built in 1687. Some of the timber from the Blue Boar next door at No 62 was reused in refurbishing the Golden Last in the late 1700s. The Golden Last’s original frame remains largely intact, Mr Hickey said.

No 62 Thomas Street was a 17th-century inn called the Blue Boar, which was demolished and rebuilt in the 1780s.

The Dublin Civic Trust wants Minister Humphreys to issue a temporary preservation order to halt demolition, and allow further assessment of the buildings and how they might best be reused. ‘To have a new buildings constructed around a medieval structure would be a unique selling point,’ Graham Hickey points out.

Meanwhile, it is believed that Dublin City Council is seeking more information on the archaeologic architectural and historical assessment of the site. In 2014, Dublin City Council extended permission for a modern office block on the site of these two Georgian houses on Thomas Street, against the advice of its own senior planner and the Dublin Civic Trust.

Thomas Street has not yet been gentrified, although it has one of the best music venues in Ireland, Vicar Street and the National College of Art and Design. It lost shops like Frawley’s a few years ago, but still has bakeries, cafés, independent shops, market stalls, artists’ studios, churches, and homes where people live above the shops. But it also has shut shops and more than its share of derelict buildings. Breathing new life into these two buildings could breathe new life into one of the oldest streets in Dublin.