Greece is good for tourists, but
is tourism good for Greece? 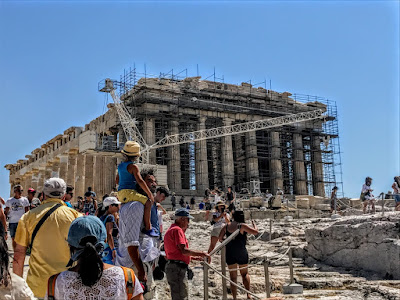 I came back last week from my second visit to Greece this summer – there was a visit to Crete in June and July, and an extended weekend in Athens in mid-August.

Each time I visit Greece, I am regularly asked two questions on my return:

Did you see much poverty on the streets? 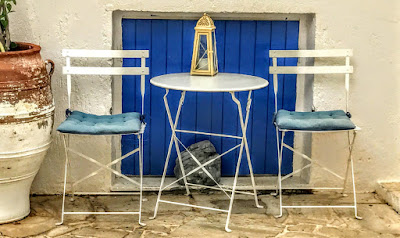 Table for two and two questions … a café in Koutouloufari in Crete (Photograph: Patrick Comerford, 2017)

Undoubtedly, the economic crises that hit Greece in wave after wave for almost a decade now have made Greece more affordable for tourists. Despite the collapse in the exchange rate for Sterling, Greece is still exceptionally good value even for British tourists, even though it is still in the Euro-zone – albeit clinging in there by its fingernails.

In addition, the political turmoil that has rocked for Turkey for over a year, and recent attacks on tourists in North Africa, means Greece is benefitting from an influx of tourists who find it a safer, attractive safe option to Turkey, Egypt, Tunisia or Morocco.

Athens has become a more attractive destination for city breaks in recent years. The new airport at Athens and a clean and easy-to-use transport system that brings passengers from the Airport straight into Syntagma Square in the heart of Athens means arriving in Greece a stress-free experience.

The area around the Acropolis has been spruced up, queueing for tickets has become less chaotic, the new Acropolis Museum has enriched the visitors’ experience, and eating out is better value per head than in most European capitals. 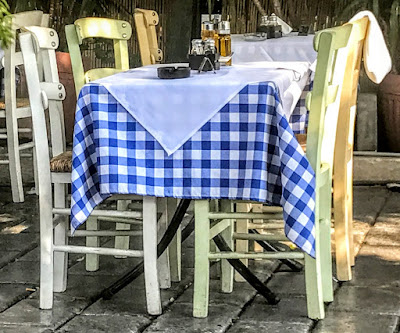 But if Greece is good value, it is because the debt crisis is keeping prices down. Taxes are high, wages are low, and take-home pay creates major crises for families.

A record-breaking 30 million tourists are expected to have visited Greece this year once the peak season is over, up from 27.5 million last year, and 23.5 million the year before. This is welcome news for the government and the economy. The tourism sector provides a fifth of all jobs in Greece and is the largest contributor to the economy, accounting for 16 to 24 per cent of Greek GDP.

After eight years of austerity, these figures are a gift to the Greek economy, equal in value to the €8.5 billion financial lifeline the troika gave to Greece earlier this year.

In Crete, hoteliers, restaurateurs, taverna owners and taxi drivers all confirm that tourism has cushioned them against the effects of austerity measures. But new austerity measures continue to be introduced and continue to bite, and take-home pay continues to drop despite increases in tourist numbers this year.

Some people in the sector also complain that the increasing popularity of ‘all-in’ hotels and packages deprived the local economy of a potential spin-off, and isolate the holidaymakers from the reality of life outside the hotel gates. 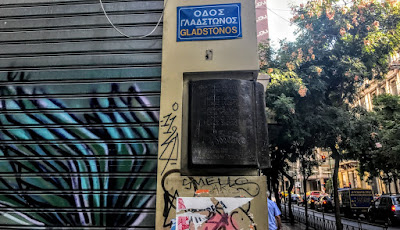 Graffiti and closed shutters can be seen on street corners in every part of Athens (Photograph: Patrick Comerford, 2017)

In recent years, three out of four university graduates have left Greece, at least 23% are unemployed, youth unemployment is now at 2-in-3, many families cannot pay everyday bills, and even among people are in employment, public sector workers in hospitals and schools find they are barely able to afford rents and soaring consumer prices. Whole streets between Syntagma Square and Omonoia Square in central Athens seem to have drawn their shutters as shop after shop has closed, one after another, now covered in ugly graffiti.

Indeed, ugly, graffiti-covered walls and shutters can be seen on every street in Athens, even in tourist areas. The boom in tourism cannot be positively assesses without taking account of social and economic tensions and taking account of the demands tourism make on over-burdened infrastructures. Greeks pride themselves on the virtue of philoxenia (φιλοξενία), welcoming the stranger, and are not as vocal as people in Barcelona in expressing their increasing unease with tourists. But, behind the scenes, many Greeks are becoming disillusioned and questioning the benefits of tourism.

Despite the rise in tourist numbers, foreign visitors are spending less on average per person. With rises in VAT rates for hotels, restaurants and tavernas, some business owners in the tourism sector are asking whether the government risks killing the goose that lays the golden egg.

Of course, there have been cuts in public transport and the occasional strike or street protest can disrupt holiday plans. But Greeks remain both hospitable and optimistic, Greece is still safe for travellers, and tourism is good for the Greek economy. The beaches are unrivalled and the sunsets are beyond imagination. 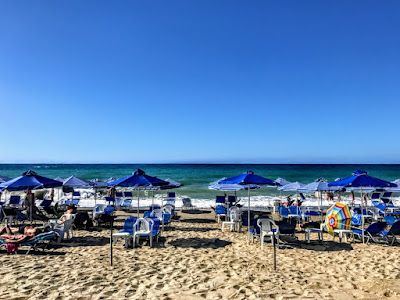 The attractions of Crete include the white beaches and the blue sky and sea (Photograph: Patrick Comerford, 2017)

Tourism may return to Turkey and North Africa if the political situation stabilises in years to come. But the biggest threat to the stability of tourism as the key sector in the Greek economy comes not from Greece’s neighbours but from climate change.

As a consequence, the length of the tourism season, defined as days with maximum temperatures above 25 C, could increase by 20 or more summer days in all tourist areas of Greece. This estimate rises to 30 days, or an extra month a year, in coastal areas of Crete.

Water shortages could be experienced in most years on islands such as Crete, partly due to the fact that tourists use far more water per capita than the local population.

This is not all the good news that a superficial reading might suggest. Many tourists may find this increase in heat in the islands, particularly in Crete, is going to put them off a holiday in Greece. The problems facing Santorini were highlighted by Helena Smith in the Guardian earlier this week.

Other problems that are beginning to show include shortages of water, which will have a knock-on effect on tourist facilities such as swimming pools and golf courses, and the increasing risk of forest fires in many areas. Some reports are even warning of a return of malaria to the southern Mediterranean region. 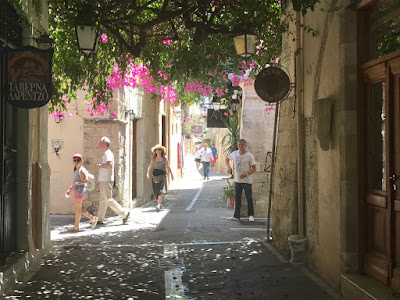 Restaurants and tavernas in a shaded corner of the old Venetian walled town of Rethymnon (Photograph: Patrick Comerford, 2017)

One taxi driver in Rethymnon claimed a group of English tourists he picked up at one of these hotels asked to be taken into the nearest area for night clubs and bars. When he asked what they thought of Greece, they said none of them had ever been to Greece – they did not know Crete was in Greece. He told me they had booked their holiday without realising which country they were going to.

When I shared this story with tourists in Crete they were shocked. In Athens, every tourist is there to visit the Acropolis and some of the other archaeological sites. In the course of a two-week holiday, most English-speaking tourists I met made some effort to visit an archaeological or historical site, such as Knossos, the monastery at Arkadi, a museum in Iraklion, the Venetian Fortezza in Rethymnon.

On the other hand, beyond enjoying the food, listening to some bouzouki music in restaurants, tasting retsina and joining in an occasional ‘Zorba’ dance, few foreigners make any effort to engage with modern Greek culture. A handful may stray into a church and find they are taken aback by the icons and frescoes, but are unlikely to stay on for the liturgy. Only a tiny number, I imagine, could name Nikos Kazantzakis as the author of Zorba or Mikis Theodorakis as the composer of the theme music for the movie. Fewer still could name any other modern Greek writer, poet, composer or artist.

Few tourists in Crete notice the poverty in the suburbs just a few metres away from the narrow resort strip along the coast. Poverty is more visible on the streets of Athens, and I have had heart-breaking encounters with whole families reduced to begging on the streets.

The tourist sector may be continuing to give hope to the Greek economy. But it is not true that a rising tide lifts all boats. 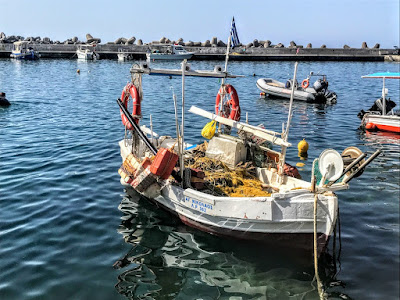 If the economy recovers, a rising tide is not going to raise all boats … the harbour in Panormos in Crete (Photograph: Patrick Comerford, 2017)