Watching the setting sun in ‘the Land of Lights’ 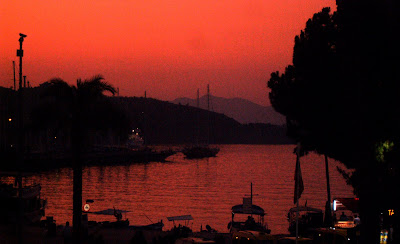 The harbour at Fethiye after sunset, seen from Arena, the restaurant below the acropolis of Telmessos and the castle of the Knights of Rhodes (Photograph: Patrick Comerford, 2011)

After a lazy day that included a walk from Ovacik to Hisaranou, swimming in the hotel pool, booking some boat trips, a Turkish bath in a neighbouring hotel, and late lunch, I caught the dolmus from Ovacik into Fethiye for dinner last night in Arena, a restaurant with spectacular views out across the harbour.

The restaurant is at the end of a busy commercial, tourist-oriented street, but the climb of many steps makes ait quiet and peaceful – and authentically Turkish. The sun had set, and the harbour was filled with sail boats, yachts, cruisers and gulets preparing for the next day’s work – many advertising tours of 12 islands in the nearby Aegean waters. 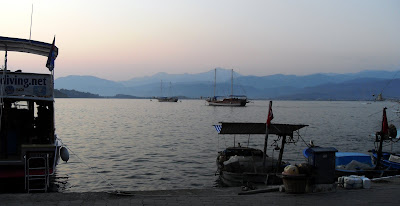 The harbour at Fethiye in the light of the setting sun (Photograph: Patrick Comerford, 2011)

Looking down from Arena, a local jewellery shops immediately below bears the name Telmessos, which points to the origins of modern Fethiye. The city is built on the site of the ancient, classical city of Telmessos (Τελμησσός).

According to a Lycian legend that tries to explain the origins of the name of Telmessos, the god Apollo fell in love with the youngest daughter of King Agenor of Phoenicia. Apollo disguised himself as a small dog and gained the love of the shy, withdrawn princess. Later, when he reappeared as a handsome man, she had a son and named him Telmessos, meaning ‘the Land of Lights.’

Some of the ruins of the ancient city surviving to this day include the nearby Hellenistic theatre by the main quay and the Lycian rock tombs that cover the cliffs and the hillside above the bazaar area. 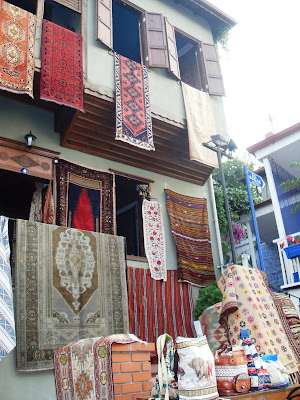 A carpet shop displays its goods in the heart of Fethiye (Photograph: Patrick Comerford, 2011)

Telmessos was once one of the most important cities of Lycia. The city became part of the Persian Empire after an invasion by King Harpagos in 547 BC, along with other Lycian and Carian cities. It may be that Pericles (Περικλῆς), who transformed the Delian League into the Athenian empire, subdued Telmessos, which joined the Attic-Delian union in mid-5th century BC.

Telmessos later left the union and became an independent state. The city had never been part of the original Lycian federation, and in the 4th century the Telmessans fought against the Lycians.

Alexander the Great came to the town after the siege of Halicarnassus, and in the winter of 334-333 BC he entered the harbour of Telmessos with his fleet. He lost the city soon after, but it was recaptured through a clever ruse conceived by Nearkhos, the Cretan commander of the fleet. Nearkhos asked King Antipatrides of Telmessos for permission to leave a number of captive women musicians and slaves in the city. But the women had concealed weapons in the boxes that were supposed to carry their musical instruments. Their escorts became armed fighters, and they captured the acropolis while the city feasted by night.

In the Roman imperial era the city was unique in having good relations with Rhodes – which today is the nearest Greek island.

Early Church history records two bishops of Telmessos: Hilary (370) and Zenodotus, who attended the Council of Chalcedon in 451) as Bishop of the Metropolis of Telmessaei and the Isle of Macra.

In the early eighth century, the city was renamed Anastasiopolis (Αναστασιοπολης) in honour of a Byzantine emperor. By the 10th century it was known as Makri (Μακρή, “distant”), after the island at the entrance to the harbour. The Bishops of Telmessos were among the suffragan bishops of Myra until the 10th century.

Makri was ruled by the Anatolian beylik of Mentese from 1284, but the place remained a principally Christian city, and in 1316 the diocese was known as the See of “Macra and Lybysium” – a reference to Levissi, about four miles south-west of Makri.

By the early 15th century, the Knights of Rhodes were occupying the crusader castle on the acropolis, carrying out repairs and using the place as a naval base. But Makri became part of the Ottoman Empire in 1424, and in the Ottoman days the city had 3,000 inhabitants, nearly all Greeks (Orthodox).

The majority Greek Orthodox population was expelled from the town in 1923, and many of them settled in Nea Makri, north-east of Athens, near Marathon in Greece. In 1934, the city was renamed Fethiye in honour of Tayyareci Fethi Bey, a World War I pilot in the Ottoman air force who was killed on an early mission.

Fethiye has suffered from many earthquakes, the last significant ones in 1957 and 1961. The town has since been rebuilt and has a modern harbour and a marina. Sitting above that harbour and marina last night, I recalled the feast at night that led to the capture of the acropolis behind me, and looking across the harbour after the setting sun had disappeared, I could see how this place could claim it is ‘the Land of Lights.’
Posted by Patrick Comerford at 06:00 No comments: