IOCS conference in Cambridge looks
at ecumenical and interfaith dialogue 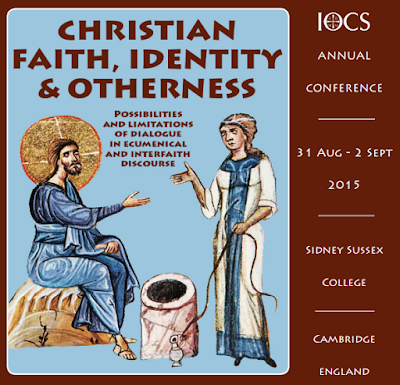 This year’s IOCS conference looks at ecumenical and interfaith dialogue

The Institute for Orthodox Christian Studies has announced details of its annual conference, which takes place this year from 31 August to 2 September in Sidney Sussex College Cambridge. 2015.

I have been a regular participant at this conference since 2008.

This year’s conference looks at “Christian Faith, Identity and Otherness: Possibilities and Limitations of Dialogue in Ecumenical and Interfaith Discourse.”

The conference investigates the nature of Christian faith and identity and how Christians can appropriately relate to internal and external otherness. One of the main aims is to reflect on the possibilities and limitations of dialogue in ecumenical and interreligious debates.

In contemporary discussions, dialogue is often understood in different or even incompatible ways: Either, dialogue is uncritically idealised as the mode of discourse par excellence to access truth. The free verbal expression of the interlocutors’ different religious convictions, their mutual respect and tolerance, are celebrated as an end in itself.

The logic of dialogue is thus understood as the norm that prevents the dialogue partners from universalising their own religious beliefs and practices at the expense of the other. This position is only a small step away from the more radical view that dialogue enables us to transcend specific manifestations of lived religion, and to access the common, universal core of human existence.

Accordingly, the fact that differences are often irreducibly incommensurable is denied. Dialogue is seen as a strategy to unmask the apparent heterogeneity of different beliefs as a mere surface phenomenon.

Or, conversely, dialogue is exposed as a manipulatory rhetorical tool and the incommensurability between different religious beliefs and practices is absolutised. It is believed that the co-existence of proponents of different religious traditions necessarily has an agonistic character.

Any attempt to initiate dialogue is viewed as an encroachment of the dominant and more powerful dialogue partner on the ideological territory of the other.

Within this framework, even peaceful, non-violent mission and conversion are inevitably seen as forms of subtle coercion and manipulation. The conference seeks to explore alternative, more nuanced views of dialogue that do justice to the Christian understanding of truth, and that avoid the impasses of these two outlined approaches.

The speakers are being invited to address one of the following issues:

Since places are limited prospective participants may prefer to reserve a place by paying a non-refundable deposit of £100.

The final deadline for payment in full is 20 August 2015.