Would this Saint George
be turned away from
England after 31 October? 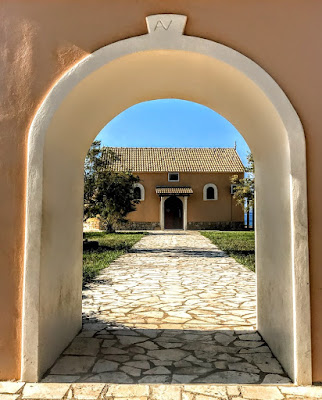 As I might have expected, the little church in this resort village of Aghios Georgios in south-west Corfu is, of course, dedicated to Saint George.

After breakfast in the Blue Sky Hotel this morning, I went for a short walk to find my bearings, to see where the coffee shops, tavernas and restaurants are, to take a short walk along the shore, and to stroll around the small harbour.

Getting my bearings the first time I stay anywhere is as important as checking the fire exits when I first drop my bags in an hotel I have never stayed in, and hopefully always of more practical relevance. I hope never to have to use the fire exit in any hotel, but I always need to know where the nearest coffee shop is, and where to buy a daily newspaper.

I also needed to check out the local tour operators, and later in the afternoon started planning for a few trips over the next two weeks, including a visit to Albania, a visit to the islands of Paxos and Antipaxos, and perhaps a day-long trip to some of the unique monasteries in Meteora, built on top of towering rock formations.

Of course, there must be day trips into the town of Corfu itself too. 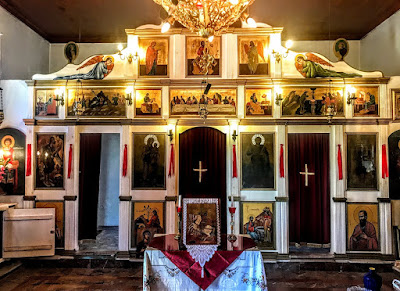 But as I went for my walk after breakfast this morning, I came across the tiny church of Aghios Georgios. The bell tower in front of the church indicates it was built in 1997, although inside it looks much older than its 22 years.

The largest icon in front of the iconostasis or icon screen is one of Saint George, dated 1985. There is also an older icon of the Archangel Michael, and an interesting icon of the Samaritan woman at the well. 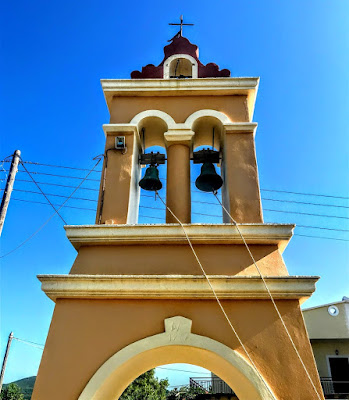 The bell tower at the church in Aghios Georgios in Corfu (Photograph: Patrick Comerford, 2019)

While Brexiteers are furtively waving the flag of Saint George, which has been hijacked inappropriately as a symbol of a particularly nasty expression of English nationalism, there is no unearthly reason why they should be allowed to continue with this misappropriation.

For Saint George is as a much a saint for Greece as he is for England; indeed, there is every reason to believe Saint George spoke Greek, but no unearthly reason to imagine he could have possibly understood English, ever.

An icon of Saint George in the church at the coast in Aghios Georgios (Photograph: Patrick Comerford, 2019)

But Saint George is the very sort of European that Boris Johnson and Nigel Farage would like to ensure is excluded from Britain after 31 October.

Saint George, who is said to have been martyred on 23 April 303, was born into a Greek-speaking family in Cappadocia, in what is today a part of Central Turkey. His father died a Christian martyr when George was a 14-year-old, and young George moved with his mother to Syria Palaestina, her home area.

Later, George became a member of the praetorian guard of the Roman Emperor Diocletian. But during the persecutions of Christians in the reign of Diocletian, George was martyred by being beheaded in the then Roman capital, Nicomedia, present-day Izmit, near Constantinople (Istanbul).

His body was brought to Lydda, south-east of present-day Tel Aviv, to be buried.

The legend of Saint George and the Dragon, set in Silene in Libya, first develops as late as the 11th century, and his popularity reached England only through the Crusades. Shakespeare consolidates his place as the patron saint of England with the cry: ‘God for Harry, England and Saint George.’

So, Greeks, Turks, Romans, Syrians, Palestinians and Libyans all claim George as one of their own. He is also the patron saint of Ethiopia, Georgia, Malta, Portugal, and of Aragon, Barcelona, Beirut, Bologna, Catalonia, Genoa, Milan, Podgerica … the patron saint of the Greek army and infantry, and countless Greek towns and villages … including this resort village of Aghios Georgios in south-west Corfu, with its small, pretty church dedicated to his name.

Would Boris Johnson like to stand up and tell me which Saint George would be welcome if he arrives at a British port or airport after 31 October?

Would Michael Gove like to turn back the Archangel Michael as he swoops down to bring judgment and truth? 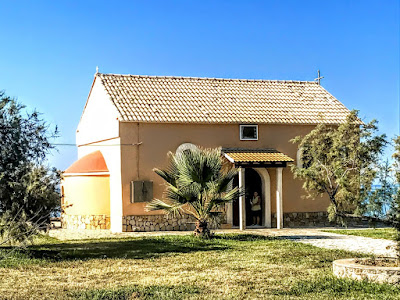 The north side, north porch and apse of the chrurch in Aghios Georgios in south-west Corfu (Photograph: Patrick Comerford, 2019) 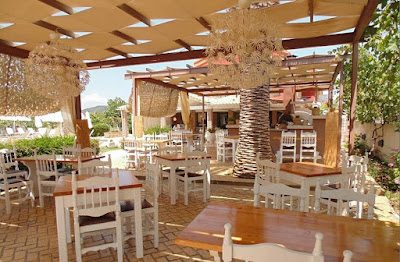 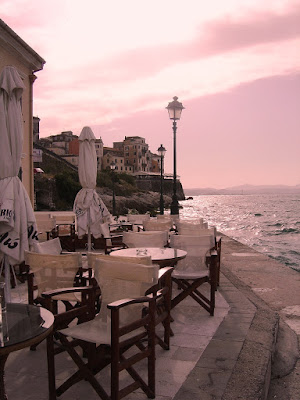