Some Christmas cheer with
‘The Wind in the Willows’ 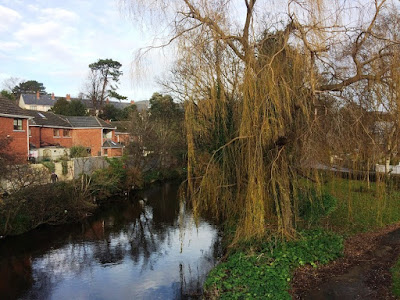 Winter willows by the river bank … the River Dodder at Orwell Road Bridge in Rathgar this week (Photograph: Patrick Comerford, 2015)

Yes, I have had a number of ‘Wind in the Willows’ moments this past week or so.

Perhaps The Wind in the Willows came to mind too when I recalled the Revd Edwards Comerford Hawkins, his son Anthony Hope, author of The Prisoner of Zenda, and their cousin, the Irish rugby superstar and war hero Basil Maclear, for Anthony Hope was a first cousin of the author Kenneth Grahame (1859-1932).

Grahame is best known for The Wind in the Willows (1908), one of the all-time classics of children’s literature. He was introduced to the riverside and boating by his uncle, the Revd David Ingles, the curate at Cookham Dean in Berkshire. Cookham was also the home of the artist Stanley Spencer (1891-1959), who often used Cookham and the river as the backdrop to his religious paintings.

Grahame’s cousin Anthony Hope wrote his epitaph, which reads: “To the beautiful memory of Kenneth Grahame, husband of Elspeth and father of Alastair, who passed the river on the 6th of July, 1932, leaving childhood and literature through him the more blest for all time.”

Recently I came across this adaptation by Michael Hague of a Christmas story inspired by The Wind in the Willows. It is a heart-warming tale of friendship, and homecoming, of generosity and hospitality.

Since living with his good friend Rat, Mole has been away from his home, Mole End, for quite some time. But with the help of Rat’s unwavering determination, he rediscovered Mole End and the empty place is transformed into a haven of warmth and contentment for Mole, Rat, and the cheerful field mice who come to the door carol singing.

They sing the carol Ding Dong Merrily on High, one of the carols that the choir sang at the Service of Nine Lessons and Carols in Christ Church Cathedral on Monday night [21 December 2015]. The lyrics were written by the Anglican priest and English composer, the Revd George Ratcliffe Woodward (1848–1934), and the carol was first published in A Cambridge Carol-Book: Being Fifty-two Songs for Christmas, Easter, And Other Seasons in 1924. Woodward took an interest in church bell ringing, which no inspired his words. He was the author of several carol books, including Songs of Syon and The Cowley Carol Book.

The tune used on Monday night was harmonised by the Irish composer Charles Wood (1866-1926) when it was published with Woodward’s text in The Cambridge Carol Book. Together, Wood and Woodward collaborated in the revival and popularisation of renaissance tunes to new English religious texts. Wood, who was born in Vicars’ Hill beside Saint Patrick’s Cathedral of Armagh, studied under Stanford and Parry, and became Professor of Music at University of Cambridge in 1924. His pupils included Ralph Vaughan Williams (1872-1958) at Cambridge and Herbert Howells (1892-1983) at the Royal College of Music.

This carol is particularly noted for its Latin refrain:

It moves from the choirs of heaven, to the choirs of the parish church, to inviting all into the church at Christmas to rejoice in the news of the Incarnation.

Rat and Mole, have found no room at the inn, and tredge through the snow-covered fields on the mountainside where shepherds might tend their flocks by night. They invite the carol singers in and share the meagre meal with them. It turns this child-like story into a retelling of the story of the Loaves and Fishes and there is a Eucharistic theme in the shared meal around a common table.

The little mice are a reminder of the meek and lowly, and though Rat and Mole are poor compared to those whose houses they have peered into, they are rich this Christmas because of the child-like presence that has come among them.

And I hope this helps you to share the Christmas spirit with others and with good cheer. 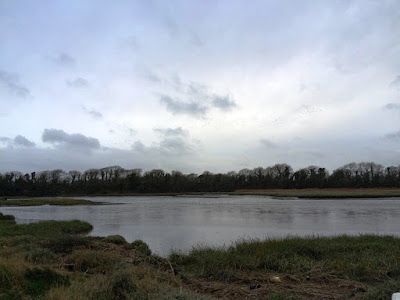 Thinking of Mole, Rat, Badger and Toad by the banks of the River Nanny last weekend (Photograph: Patrick Comerford, 2015)

Ding dong merrily on high,
In heav’n the bells are ringing:
Ding dong! verily the sky
Is riv’n with angel singing.
Gloria, Hosanna in excelsis!

E’en so here below, below,
Let steeple bells be swungen,
And “Io, io, io!”
By priest and people sungen.
Gloria, Hosanna in excelsis!

Waiting in Advent 2015 with
Dietrich Bonhoeffer (25) 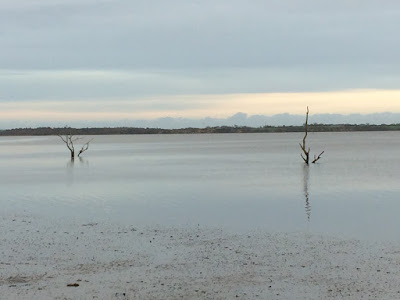 ‘It is only by living completely in this world that one learns to have faith’ … the mouth of the River Slaney at Ferrycarrig, Co Wexford (Photograph: Patrick Comerford)

There are just two more days to go to Christmas this morning [23 December 2015], and tomorrow is last day of Advent. During the season of Advent this year, I have been working my way through my own Advent Calendar. Each morning, I am inviting you to join me for a few, brief moments in reflecting on the meaning of Advent through the words and meditations of the great German theologian and martyr, Dietrich Bonhoeffer (1906-1945).

Earlier this year, the Community of the Resurrection in Mirfield organised a two-day conference, ‘Bonhoeffer and Mirfield: Learning Wisdom for the Church Today.’ The conference in September marked the 80th anniversary of Dietrich Bonhoeffer’s visit to Mirfield and explored themes central to Bonhoeffer’s life and work and their enduring significance for the Church of today.

Bonhoeffer visited Mirfield in 1935, shortly before he returned to Germany to lead the Confessing Church seminary at Finkenwalde. The pattern of monastic life and prayer he experienced at Mirfield made a deep impression on him and helped to shape life at Finkenwalde over the next two years. For example, as a result of this visit, he introduced the recitation of parts of Psalm 119 as part of the daily prayer life in Finkenwalde, and the visit also inspired him to write Life Together (Gemeinsames Leben).

The speakers at the Mirfield conference included the Revd Dr Keith Clements formerly of the Bristol Baptist College, Bishop Martin Lind of the Lutheran Church of Great Britain, Dr Nicola Wilkes of Cambridge University, and the Revd Dr Jennifer Moberley of Durham University.

“I’m still discovering, right up to this moment, that it is only by living completely in this world that one learns to have faith. I mean living unreservedly in life’s duties, problems, successes and failures, experiences and perplexities. In so doing, we throw ourselves completely into the arms of God.”