It is interesting how many prints or posters or photographs or paintings no longer fit or match when a room has been repainted.

I just suppose some old but once favourite images will have to find somewhere else to hang.

The house was repainted recently, and some walls just needed a fresh look. A new print here, a new poster there ...

But some parts of the house were just not getting the right touch.

And so, in the last few days, I had three of my own favourite photographs, taken in the last year or two, printed on stretched canvas and mounted:

I took this photograph at the end of March. It was late evening, and we had walked half-way around Stowe Pool, past Saint Chad’s Church and Stowe House, once the home of Richard Lovell Edgeworth.

It was Easter Eve, the sun had set, and I thought it was just too dark to catch anything on my camera. We were about to walk on towards Tamworth Street and look for a table at the Olive, when my eyes were caught by the deep blue colours in the water, and reflections of the clouds, the cathedral and the trees in the water. If you look carefully, you can see where some lights have come on.

We went on to eat in Sorrento on Bird Street instead.

Easter Morning the next day was wonder-filled and full of joy.

2, A lake on the Farnham Estate, Co Cavan 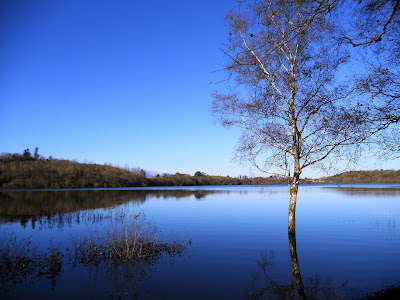 ‘In my beginning is my end’ (TS Eliot) ... a lake view on the Farnham Estate in Co Cavan (Photograph: Patrick Comerford, 2011)

This photograph is deceptive, for the clear blue sky makes this look like a summer scene. But it was early November 2011, and I was staying in the hotel on the Farnham Estate in Co Cavan.

There are beautiful walks through the trees and by the lakes. It was a bright clear day, and when we arrived at this small lake the reflections in the water were so sharp and deceptive, it was difficult to know where the lakeside ended and the lake water began. As I looked out into the lake, I stopped and wondered for a moment where did this tree emerge from the water, and where did its reflection begin.

And I thought of TS Eliot’s opening words in ‘East Coker’:

3, A house near the Fortezza in Rethymnon, Crete

On and off, since the mid-1980s, I have been enjoying holidays in Crete, where my favourite town is Rethymnon. Last July, for the umpteenth time, I climbed the steep hills up to the Venetian Fortezza to enjoy the views across the town and out to the sea.

Clustered around the base of the Fortezza, there are warrens of back streets with houses, each pretty and charming in its own self-contained way. This house is typical of the charm of these back streets. This house has pretty colours, with its potted flowers.

At the time, the wheels on the bicycle reminded me of the deflated state of the Greek economy.

I shall be back again later this summer, hopefully.

Meanwhile, thanks to Shauna Moggan for organising the printing and framing.

Posted by Patrick Comerford at 20:41 No comments: