Meeting a brave bishop from Zimbabwe 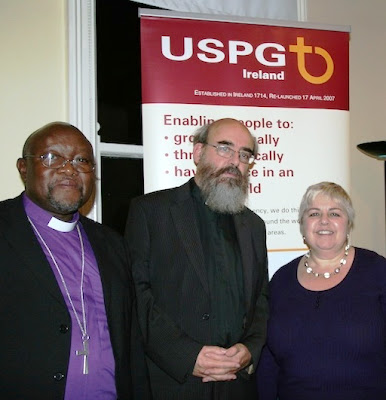 It has been a busy week, with a Harvest Thanksgiving Eucharist in Saint Canice’s Cathedral, Kilkenny, the annual general meeting of the members and directors of USPG Ireland on Monday, and the annual meeting of the Dublin and Glendalough Diocesan Synods yesterday [Tuesday] and today [Wednesday].

USPG Ireland (the United Society for the Propagation of the Gospel – Anglicans in World Mission) is the oldest mission agency in the Anglican Communion, and USPG had stalls at many of the diocesan synods meeting this week. The annual general meeting of USPG this week was chaired by Bishop Michael Burros of Cashel and Ossory, and Bishop Michael Doe from USPG in London was present.

Last week, the Right Revd Dr Chad Gandiya, Bishop of Harare, was in Ireland as a guest of USPG Ireland, speaking at the Armagh Diocesan Synod, meeting the Archbishop of Dublin, preaching at the Community Eucharist in the Church of Ireland Theological Institute, and speaking at a public meeting later that evening.

I first got to know Bishop Chad when he was Regional Desk Officer for Africa and the Indian Ocean at the USPG office in London, and his decision to return to Zimbabwe during these difficult times has been a brave and heroic decision.

Bishop Chad studied theology in Harare, Nottingham and Michigan, and has sent two periods totalling eight years on the staff of Bishop Gaul Theological College – a theological college in Zimbabwe that takes its name from Bishop Billy Gaul, an early SPG missionary from Ireland. He has also been on the staff of Michigan University, where he was chaplain, and the United College of the Ascension in Birmingham, where I took a course in 1996.

He returned to Zimbabwe last year and was consecrated Bishop of Harare in a four-hour ceremony in the City Sports Centre on 26 July. His consecration intensified the reassertion by the [Anglican] Church of the Province of Central Africa of its authority in the Diocese of Harare. Three years ago, the former Bishop of Harare, Nolbert Kunonga, attempted to force the Anglican dioceses in Zimbabwe to withdraw from the Province. Taking this as a personal schismatic departure, the province responded by declaring the see vacant.

Bishop Chad told us of the difficulties created by Bishop Kunonga continuing reliance on the support of the tyrannical and despotic government of President Robert Mugabe, and described how Anglicans have been beaten by police and forced to worship in other venues, often in the open, despite court rulings on churches and church premises, and the support of the legitimate Anglican Church in Zimbabwe expressed by the Lambeth Conference in 2008 and by Anglicans worldwide.

Bishop Kunonga has formed a new church entity, calling it the Anglican Province of Zimbabwe. He has declared himself archbishop of his own church, and has appointed his own three bishops.

Bishop Chad is the son of a priest – his father, the Revd David Gandiya, who is now retired, served in both the Diocese of Manicaland and the Diocese of Mashonaland. His bravery in returning to Zimbabwe is a refreshing challenge to us all.
Posted by Patrick Comerford at 13:30 No comments:

The little man with big faith

Jesus calls Zacchaeus down from the sycamore tree … is this story too familiar that it is difficult to find fresh insights? (Illustration © Henry Martin)

Last week we looked at the story of the Pharisee and the tax collector praying in the Temple (Luke 18: 9-14). Imagine if Zacchaeus was the model for that publican, that tax collector.

The story of Zacchaeus (Luke 19: 1-10) is the Gospel reading for the Sunday after next, the Fourth Sunday before Lent (31 October 2010). It is a popular Sunday school story, and so, because it is so familiar to all of us, like the story of the Good Samaritan or the Prodigal Son, it is often difficult to read it again with fresh eyes and to find fresh insights.

Yet, this is a fast-moving story, with all the fast-moving pace we are more familiar with in Saint Mark’s Gospel: every verse from verse 1 to 7, in the original Greek version of this story begins with the word καὶ (and), indicating that the pace has heightened, the story is speeding up, we are moving closer to the climax of this Gospel.

Jesus is about to set out from Jericho to Jerusalem From Jericho, the road is going to be more treacherous: remember that it was on the road between Jericho and Jerusalem that a certain man was mugged and left for dead until a good Samaritan passed by.

Jericho was on a main trade route, at the centre of the lucrative trade in balsam, making it an important customs centre. But it has another significance: the walls of Jericho fell down at the call of the trumpets, and the call of Jesus breaks down all the walls people erect around themselves, individually and collectively.

Zacchaeus is not any run-of-the-mill tax collector – he is the ἀρχιτελώνης, the chief tax collector (verse 2), and so by contract had the right to collect revenues throughout this district. His name Zacchaeus (Greek Ζακχαῖος, Zakchaios) means pure, but his neighbours would have despised him, not only because they believed he squeezed the last drachma and the last lepta out of widows and children, but because they would also have seen him as a collaborator with the Roman administration – never mind that an autonomous Jewish government would still have had to raise taxes to provide itself with revenue and funding. His stature in some way symbolises his low place in Jewish society in Jericho.

So he can catch a glimpse of Jesus, Zacchaeus climbs a sycamore tree (verse 4). Now while his name meant “pure,” he climbed a tree that was regarded by some as unpure, unclean, for its fruit was fed to swine. This was humbling for Zacchaeus: to see Jesus, Zacchaeus had to crucify his pride. And so the tree also symbolises the cross: a picture is being painted to allow us imagine Zacchaeus prefiguring those who take up his own cross and follow Jesus (see Luke 9: 23), while Jesus’ call to Zacchaeus to come down (verse 5) could also represent the call to humility for Christians.

Zacchaeus is delighted and welcomes, receives Jesus (verse 6). But when Jesus goes to dine with Zacchaeus, all who saw it begin to grumble Verse 7): the people murmured in the wilderness; once again they are murmuring (διαγογγύζω), complaining indignantly, when it comes to eating time, but this time they are not murmuring for food for themselves. Yet, in the wilderness God fed all the wandering people, whether they were sinners or righteous.

Zacchaeus then stands before the Lord and says: “Look half of my possessions, Lord, I will give to the poor; and if I have defrauded anyone of anything, I will pay back four times as much.” (verse 8).

Why does he not just pay back what he has taken?

The Jewish legal code prescribes the restitution required when responsible for the loss of another’s property (see Exodus 22: 1-15). This restitution ranges from simple replacement for negligence, increasing up to two, four or five times replacement for various thefts.

David applied this rule when he said: “he shall restore the lamb fourfold, because he did this thing, and because he had no pity” (2 Samuel 12: 6).

Rather than asking how little he could do to correct his past wrongs, Zacchaeus chooses a generous restitution. He places himself on the guilty side of the spectrum in Exodus 22. Now he is living in maximum obedience to God. There is no law that says he must give half of everything to the poor, but Zacchaeus does this as well. Compare this tax collector’s self-description with the Pharisee’s self-description and self-justification in the reading for the previous Sunday (Luke 18: 9-14, the Fifth Sunday before Advent, 24 October 2010).

Jesus then says to him: “Today salvation has come to this house, because this too is a son of Abraham” (verse 9).

The salvation that Christ brings is not specifically to this house in which Zacchaeus lives, nor even to House of Israel, but to the household of God. The word οἶκος in verse 9 means not just a house or even a specific inhabited house or home, but also refers to the house of God, the tabernacle, the place where God fixes his residence, the family of God, of the Christian Church, of the church of the Old Testament and New Testament.

Perhaps it is because the faith of Zacchaeus is so integral to the apostolic faith of the Church, and the salvation brought to his house is the salvation brought by Christ into the whole world, that the early Church developed a number of traditions around Zacchaeus. According to Clement of Alexandria, in Stromata, Zacchaeus was surnamed Matthias by the apostles, and took the place of Judas after the Ascension (Acts 1: 26). The Apostolic Constitutions (7: 46) identify “Zacchaeus the Publican” as the first bishop of Caesarea.

Canon Patrick Comerford is Director of Spiritual Formation, the Church of Ireland Theological Institute. This essay is based on notes prepared for a Bible study win a tutorial group with MTh students on 20 October 2010