A 3,500-year-old stone circle
in the hills above Millstreet

The Stone Circle at Knocknakilla was probably erected in the Middle or Late Bronze Age (Photograph: Patrick Comerford, 2017; click on image for full-screen view)

During my visit to Millstreet, Co Cork, last Sunday [6 August 2017], my cousin brought me to visit the Stone Circle at Knocknakilla in the hills above Millstreet.

Local historians have argued about the meaning of the placename of Knocknakilla. Some say the name of the townland is Cnoc na Coille, ‘the Hill of the Wood,’ while others derive from Cnoc na Cille, meaning ‘the Hill of the Church.’

The Knocknakilla megalithic complex is set in blanket peatland on the north-west upper slopes of Musherabeg mountain, about 11 km outside Millstreet and about 1 km from the entrance to the Millstreet Country Park. This is a level patch of bogland overlooking a deep valley.

Knocknakilla Stone Circle is a small prehistoric complex consisting of a stone circle, two standing stones, and a cairn, and is thought to be about 3,500 years old.

The stone circle was probably erected in the Middle or Late Bronze Age (1800-1600 BCE), and it is may have been used for rituals or ceremonies. It is typical of these types of monuments, and the alignments of the standing stones and circle were probably influenced by observations of solar and lunar cycles.

Given the relation of the stone to both the rising and setting sun, it may be that they were aligned with purpose and function in mind, such as the calendars used by early farmers, and it may have been related to harvest or fertility ceremonies.

The stone circle has five large stones, although two have collapsed. The entrance to the circle faces north-east.

The interior of the circle was excavated in 1931, and was found to be paved with stones, with quartz pebbles concentrated around the entrance, but no artefacts were found. The two standing stones – one of which fell about 50 years ago – are to the southwest of the circle.

The cairn just east of the stone circle was discovered during peat-cutting in 1970. This cairn is defined by a circle of 11 stones.

The area is rich with archaeological artefacts, and nearby are two cashels, a ringfort, two fulacht fiadh, a possible souterrain and a circular enclosure. Near the main site, a Dolmen made up from a long flat capstone supported by three upright stones is a modern re-construction.

Knockanilla is a national monument.

Kilmeedy Castle, a former
MacCarthy stronghold near
Drishane and Millsreet 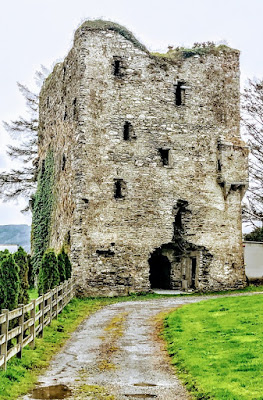 Kilmeedy Castle, built in the 1430s or 1440s by the MacCarthy family of Drishane Castle (Photograph: Patrick Comerford, 2017)

After visiting Drishane Castle on Sunday afternoon [6 August 2017], I was brought to see Kilmeedy Castle, which lies next to a farm south of Millstreet, Co Cork. This tower house is within the parish of Drishane and ‘on the confines of the baronies of Magonihy, West Muskerry, and Duhallow.’

The castle was built to guard the wild mountain pass between two mountains, Musherabeg and Claragh. The road that runs past the castle was the main highway from Co Kerry into Co Cork, and the merchants and traders who used it were the victims of many raids and robberies. This was later the ‘Mail Coach Road’ and the main road linking Macroom and Killarney.

By 1638, a branch of the MacCarthys of Drishane Castle was living in Kilmeedy Castle. The Meirgeach O’Mahonys, who were chief stewards of MacCarthy Mór, are also said to have had lived at Kilmeedy Castle at one stage in the 17th century.

In the mid-17th century, the castle was damaged by Cromwell’s Parliamentarian forces, who also laid siege to Drishane Castle. Charles MacCarthy, who lived in Kilmeedy Castle, was shot dead at the castle gate by a Colonel Ingoldsby with a ‘span’d pistol’ in 1651. A local legend says ‘the golden gates of Kilmeedy’ were thrown into Comeenatrush, a lake in a neighbouring townland.

The MacCarthys lost their lands again after the Williamite wars (1688-1691). The castle was attacked in 1713 by the dispossessed Tadhg O’Keeffe of Ballymaquirke. But yet again it reappears in the will of Donagh MacOwen MacCarthy, the centenarian, in 1728.

The castle later suffered at the hands of local tradesmen and builders who hacked away at its limestone curbstones and used them as corner stones in many houses in the area, and used the castle ruins as a source of cheap building materials. It is said some of these stones can be seen appearing through the plaster in the old farmhouse beside the castle.

The stairs were also broken near the top by farmers who supposedly had a problem with cattle climbing to the top of the castle in summer days to get away from the flies.

Local lore also says an underground passage leads from under the ground floor to some unknown place beyond the castle walls.

Kilmeedy Castle remains an interesting tower house, and my cousins remember playing it as children and reaching the top. But the castle stands on private grounds and can no longer be visited by the public.

The national flag was flown from the top of the castle on special occasions in recent decades, including Pope John Paul II’s visit to Ireland in 1979, and when Millstreet hosted the Eurovision Song Contest in 1993.