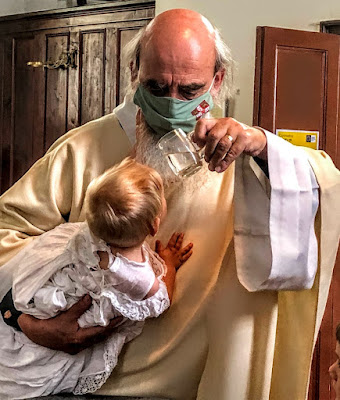 A Baptism in Askeaton:

Simon Michael Foley, son of Rob and Nicky Foley, and grandson of Simon and Hilary White of Nantenan, was baptised in Saint Mary’s Church, Askeaton, on Sunday 22 August.

The godparents or sponsors were Emanuel Barry, Ann-Marie Ryan and Lucy Taylor.

Canon Patrick Comerford and Siobán Wheeler (Parish Reader) took part, along with Father Robbie Coffey (Saint Mary’s Roman Catholic Church, Rathkeale) and the Revd Ruth Watts (Adare and Ballingrane Methodist Churches), the ecumenical service in Rathkeale on 4 September. The service in the Abbey ruins in Rathkeale was organised by the Rathkeale Pre-Social Cohesion Group, and marked both Rathkeale ‘Fun Day’ and the opening of the Greenway.

Patrick Coleman and members of Rathkeale Historical Society visited Holy Trinity Church, Rathkeale, recently, and were shown the Southwell Communion Paten and Chalice and the Southwell monuments by Susan Shorten.

A funeral in Askeaton:

Canon Patrick Comerford was invited by Father Sean O Longhaigh to take part in Funeral Mass in Askeaton of Myles ‘Miley’ Harty (20), who died on the morning of his wedding in a single-car crash on the R518 Askeaton to Rathkeale road.

Congratulations to Raylene Downes, a parishioner of Castletown Church, Kilcornan, who has been appointed the new Diocesan Registrar.

Harvest is the theme for the two services on Sunday 3 October. Patrick is preaching at the Harvest in Limerick on 10 October, when the guest preacher in Castletown and Rathkeale is the Revd Dr Leonard Madden, the new cathedral curate who was ordained priest on 11 September.

31 October (IV before Advent, All Saints): 11 a.m., United Group Service (HC), Askeaton, followed by reception at the Rectory (subject to weather and Covid-19 regulations at the time).

Siobhán Wheeler, or parish reader, kindly looked after Sunday services and sermons while Canon Patrick Comerford was on holidays in September. 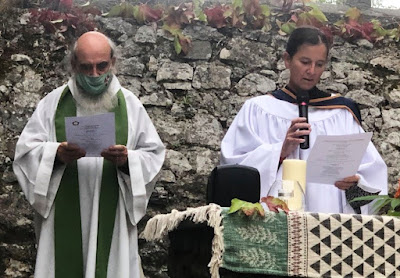 This is an edited version of the Rathkeale and Kilnaughtin Group parish notes in the October 2021 edition of ‘Newslink’, the Limerick and Killaloe diocesan magazine 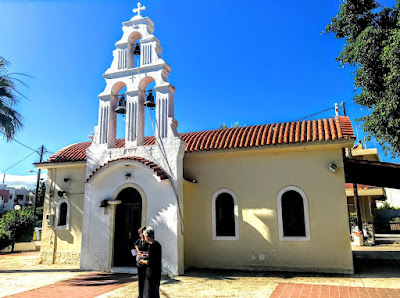 The Church of Saint Nektarios in Tsemes, east of Rethymnon (Photograph: Patrick Comerford)

The General Synod of the Church of Ireland is due to conclude its meeting today, and once again I am likely to find myself in front of a the screen of my laptop for much of the morning, if not much of the day, taking part in ‘Zoom’ meetings.

My theme for these few weeks is churches in Rethymnon on the island of Crete, where I spent two weeks in mid-September.

My photographs this morning (2 October 2021) are from the Church of Saint Nektarios, in small village of Tsesmes, east of Rethymnon, in the hills above the long stretch of beach at Platanias. 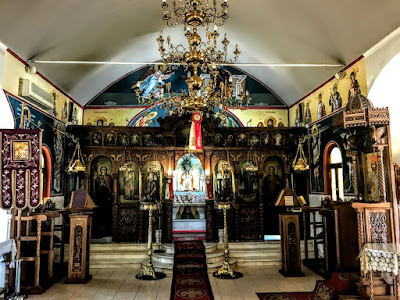 Inside the Church of the Saint Nektarios in Tsesmes (Photograph: Patrick Comerford)

I have been visiting Rethymnon almost annually since the mid-1980s, and I have stayed in the suburban areas of Platanias and Tsesmes, east of Rethymnon, since 2015. This area is a mix of suburban, commercial, and slowly developing tourism.

The shops and supermarkets cater primarily for the local residents, but there is a number of small hotels and apartment blocks where I have stayed, including La Stella, Varvara’s Diamond, and Julia Apartments, and restaurants that I have become comfortable with and where I receive a warm welcome each time I return.

These two villages have merged almost seamlessly, and although they have two churches, they form one parish, served by one priest, Father Dimitrios Tsakpinis.

These churches are recently-built parish churches: the church in Platanias dates from 1959 and the church in Tsesmes from 1979. They are small, and in many ways, unremarkable churches, compared to the older, more historic churches in the old town of Rethymnon.

But when I am staying in Platanias and Tsesmes, I have seen them as my parish churches, and I have always been welcomed warmly.

The church in Tsesmes is dedicated to Saint Nektarios (1846-1920), Metropolitan of Pentapolis and Wonderworker of Aegina. He was born in Selymbria (today Silivri, Istanbul), and at the age of 14 moved to Constantinople. In 1866, at the age of 20, he moved to the island of Chios to take up a teaching post. Ten years later, in 1876, he became a monk.

Saint Nektarios served the church in Cairo and Greece, and was recognised as a saint in 1961.

Father Dimitrios, the parish priest, celebrates the Divine Liturgy on alternate Sundays in the churches in Platanes and in Tsesmes. However, churchgoing is often low in numbers in the summer months because of the heavy demands on local people working in the tourism sector.

Throughout the liturgy, there is a regular censing of the people by the priest, as they present themselves as a holy people, prepared to meet Christ in the proclamation of the Gospel, in offering the gifts of bread and wine, and the presence of Christ in the Sacrament of the Eucharist.

I am always taken aback at the small number of people who actually receive the Communion in Greek churches on a Sunday morning, although everyone takes portions of the blessed bread or prosphora afterwards to bring home, making the day holy for the whole family. 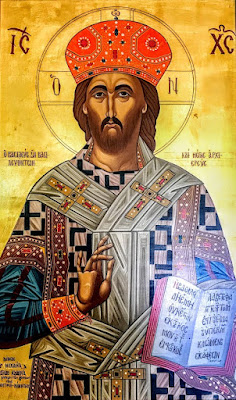 An icon of Christ the Great High Priest on the bishop’s throne in Saint Nektarios Church in Tsesmes (Photograph: Patrick Comerford)

17 The seventy returned with joy, saying, ‘Lord, in your name even the demons submit to us!’ 18 He said to them, ‘I watched Satan fall from heaven like a flash of lightning. 19 See, I have given you authority to tread on snakes and scorpions, and over all the power of the enemy; and nothing will hurt you. 20 Nevertheless, do not rejoice at this, that the spirits submit to you, but rejoice that your names are written in heaven.’

21 At that same hour Jesus rejoiced in the Holy Spirit and said, ‘I thank you, Father, Lord of heaven and earth, because you have hidden these things from the wise and the intelligent and have revealed them to infants; yes, Father, for such was your gracious will. 22 All things have been handed over to me by my Father; and no one knows who the Son is except the Father, or who the Father is except the Son and anyone to whom the Son chooses to reveal him.’ 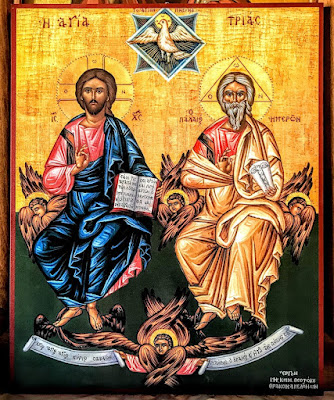 An icon of the Holy Trinity in Saint Nektarios Church in Tsesmes (Photograph: Patrick Comerford)

The Prayer in the USPG Prayer Diary today (2 October 2021, International Day of Nonviolence) invites us to pray:

Let us pray for an end to conflict, and a renewed commitment to peace.. 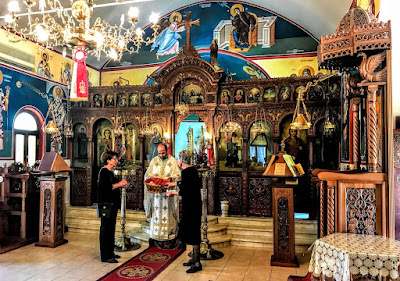 After the Divine Liturgy in Saint Nektarios Church in Tsesmes on a Sunday morning (Photograph: Patrick Comerford) 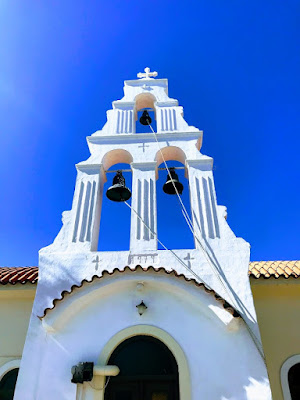