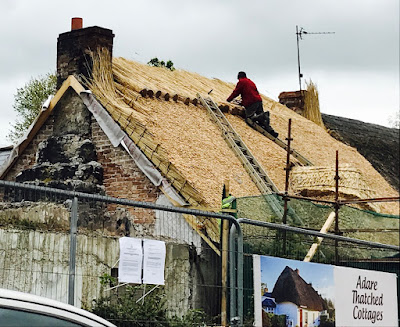 Work on rethatching the Benson cottage is near completion in Adare, Co Limerick (Photograph: Patrick Comerford, 2017)

I had a busy working afternoon in Adare, Co Limerick, today [27 April 2017]. But on my way back to Askeaton, as I was going through Adare, it was a delight to see that work on refurbishing and rethatching one of Adare’s beautiful thatched cottages is nearing completion almost two years after it was badly damaged by fire.

The Benson cottage was approved last year for a grant of €16,000 for repairs, announced by the Minister for Arts, Heritage and the Gaeltacht, Heather Humphreys. It was one of 57 heritage projects to receive funding under the Structures at Risk Fund for 2016.

In June 2015, a fire completely destroyed two of the thatched cottages, which are popular with tourists. The cottage are attractive assets to Adare, and there are high hopes that that both cottages can be restored to their former glory. 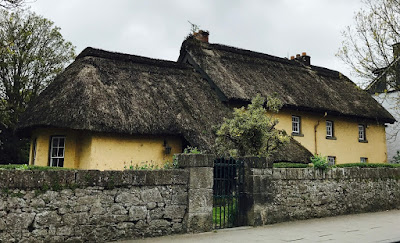 The fire broke out early in the afternoon as a wedding was about to start across the street in the 13th-century Holy Trinity Abbey Church. One cottage was gutted in the fire, a second was burned to the ground, and serious water damage was caused to a third cottage.

The fire was a ‘horrible tragedy’ for Jane and Henriette Benson, who lived in the cottage that is now being refurbished and rethatched. The second cottage was owned by an Irish-American businessman who lives in New York; the woman who was renting the cottage was preparing to move out and had packed everything, but lost all she owned in the fire. The third cottage, owned by Lucy Erridge, who runs a fashion and crafts shop, sustained serious water damage but was saved from the fire and is back in business.

After the fire, Henriette Benson said that all of the family’s possessions were destroyed, along with the house that had been their family home for many years. 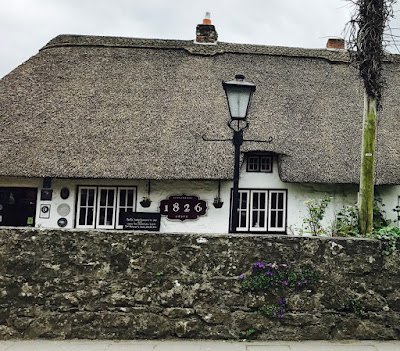 The thatched cottages were built in 1826 by Lord Dunraven for estate workers in Adare (Photograph: Patrick Comerford, 2017)

The two houses that need restoration, refurbishment and rethatching are among 11 remaining thatched cottages built in Adare in 1826 by Lord Dunraven as staff houses, and they have enjoyed landmark status in the town ever since.

This week, it was a joy to see workers busy completing the thatching on the Benson cottage after full refurbishing. The site is fenced off but is attracting considerable attention. Sadly, the second cottage destroyed in that fire remains untouched, and Limerick City and County Council has posted a notice declaring its intention to place the site into the Derelict Sites Register.

The cottage is at the end of a row of thatched cottages, beside the Benson cottage. The council now considers it a ‘derelict site’ and plans to place it on the register unless the ‘unknown owner’ makes representations this month.

The semi-detached three-bedroom cottage is still in the process of being sold, after a sale was agreed in January at ‘substantially above’ its asking price of €130,000. The new owner, reportedly, is from the Limerick area. Thousands of euro would be required to restore it to its former habitable state.

Meanwhile, work continues on the multi-million euro refurbishment of the Adare Manor hotel and golf resort, once the home to the Earls of Dunraven and now expected to reopen in September. 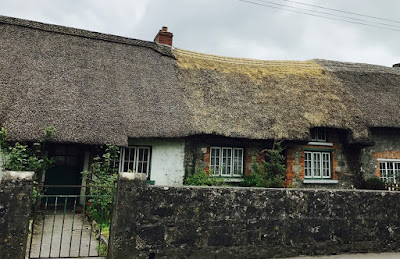 The thatched cottages are part of the tourist attractions of Adare (Photograph: Patrick Comerford, 2017)

Posted by Patrick Comerford at 18:48 No comments: 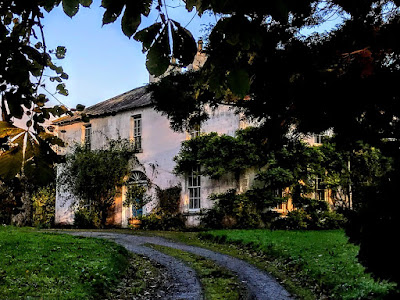 The Ennis Chronicle reported from Limerick on Monday 5 October 1795 on the marriage the previous Thursday at Silvermines, Co Tipperary, of William Ferguson, son of John Ferguson, of Limerick, and a Miss Comerford, daughter of Michael Comerford of Silvermines. The Ferguson family were woollen merchants and drapers in Limerick and also lived in Rathkeale, Co Limerick.

The Limerick Chronicle reported on 18 December 1850 that Anne Comerford of Glentworth Street, Limerick had died at the ‘advanced age’ of 97. She was the widow of John Comerford of Killarney, Co Kerry.

Half a century later, JJ Comerford of Kilkenny, who died on 29 March 1902, was a journalist and former Limerick correspondent of the Freeman’s Journal.

On 4 January 1883, an inquest was held into the death of Mary Anne Comerford, an elderly woman, after an assault. She was 75 at the time.

Delving further into Comerford links with Limerick, I have come across at least one Comerford from a family with roots in Co Carlow and Dublin, who was baptised in the second half of the 19th century in Castletown Church, near Pallaskenry, one of the four churches in my group of parishes; two Comerford nuns who lived about a century ago in a convent where one of the ‘residents’ in the attached ‘Magdalene Laundry’ was also a Comerford; a family of Comerford carpenters who lived in Limerick for at least four generations – some soldiers and RIC constables; and an interesting and unexpected connection between the Comerfords of Rathdrum, Co Wicklow, and Castleconnell, Co Limerick. 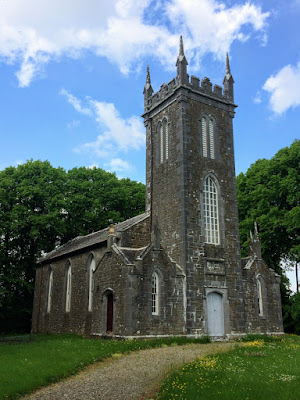 Castletown Church, Pallaskenry, where William Henry Comerford may have been baptised in 1875 (Photograph: Patrick Comerford, 2017)

The first-named son of Patrick and Sarah Anne Comerford was:

Thomas and Mary Comerford were the parents of at least four sons and two daughters:

The third son of Thomas and Mary Comerford was:

JAMES RICHARD COMERFORD (1853-post 1917). Clerk, bookkeeper. He was born in Cork in 1853 (1901 census, 1911 census). Clerk. He was living at the Lodge, Saint Michan’s Church, Dublin, where his father was the sexton, on 15 February 1886, when he married Ellen Eva Dowling, daughter of John Dowling, army pensioner; she was born in Co Kildare (1901 census). The witnesses were his brother Samuel Henry Comerford and Maria Madden.

James and Ellen were the parents of 13 children, eight of whom were living in 1911. They included:

The fourth child and third-named son of Patrick and Sarah Anne Comerford appears to be the same person as:

They were the parents of a son and two daughters:

JAMES COMERFORD (1851-1894), butler, of Pallaskenry, Co Limerick, and Gardiner Street, Dublin. He was born at 133 Stephen’s Peer (?) on 20 August 1851, and was baptised on 29 August 1851 in Saint Peter’s Church (Church of Ireland), Dublin, by the curate, the Revd John James McSorley. He gave his address as 96 Lower Gardiner Street, Dublin, when he married in Saint Thomas’s Church (Church of Ireland), Dublin, on 17 May 1873 Elizabeth Lightly, daughter of Henry Lightly, hotel operator, of 96 Lower Gardiner Street.

They were living in Pallaskenry, Co Limerick (1875), and at 96 Lower Gardiner Street (1880). He was a witness on 20 January 1883 at the marriage in Saint Thomas’s Church (Church of Ireland), Dublin, of Elizabeth’s sister, Maria Lightly, of 3 Upper Gloucester Street, and John Drew, house painter.

He died on 6 February 1894 at 3 Upper Gloucester Street, Dublin, with his son WH Comerford present.

They were the parents of two sons: 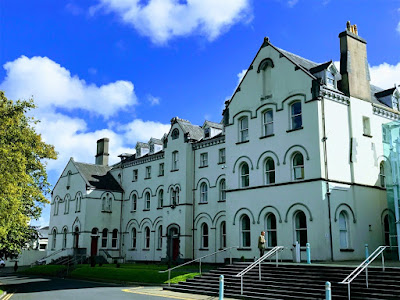 When Sister Catherine died at the age of 40 on 13 November 1921, it was noted that she was originally from Clonegal, Co Carlow. Sister

The Good Shepherd Convent became known as one of the ‘Mother and Baby’ homes or ‘Magdalene Laundries.’ Ironically, one of the women buried in the convent cemetery is Bridget Comerford who died there in 1958 at the age of 56.

A family of Limerick carpenters

The River Shannon at Arthur’s Quay with King’s Island to the right (Photograph: Patrick Comerford, 2017)

MICHAEL COMERFORD, carpenter, of Limerick, was the ancestor of a long-tailed family of carpenters associated with the Island in Limerick over four generations. He lived in the mid-19th century and was the father of at least two sons:

Hannah Comerford died in 1887, aged 30. Michael Comerford was a widower when he married on 23 April 1887 in Saint Michael’s Roman Catholic Church, Denmark Street, Limerick, the widowed Bridget McMahon, of Punche’s Row, Limerick, daughter of John O’Hara, farmer. They were living at Bridge Street, Limerick (1887), and he had died by 1895 when his daughter Mary married James Keane.

The second named son of the elder Michael Comerford, carpenter, of Limerick, was:

Michael Comerford died in 1907 at the age of 36. Mary Comerford was a widow, aged 38 and living at 11 Arthur’s Quay, Limerick, on the census night 2 April 1911. They seem to have had 13 children, although the 1911 census said they were the parents of 12 children, six of whom were still alive:

The eldest son of Michael and Mary Ann Comerford was:

A Cork and Limerick family:

RICHARD COMERFORD, pork butcher, of Limerick (? born ca 1850). He was the father of:

PATRICK COMERFORD, saw mechanic or mill sawyer, of Henry Street, Limerick. He was born in Cork ca 1869/1871. He was 31 when he married in Saint Michael’s Roman Catholic Church, Limerick, on 1 February 1911, Mary Noonan (aged 23). They were the parents of two sons and two daughters:

Soldiers and Constables in Limerick:

Two men named Daniel Comerford, one a police constable, and the other the father of a soldier, and a second policeman, Thomas Comerford, an RIC sergeant, are also found in Limerick in the late 19th century.

JOHN COMERFORD, farmer, was the father of:

DANIEL COMERFORD, labourer, was the father of:

THOMAS COMERFORD, a sergeant in the Royal Irish Constabulary, and his wife, Mary Agnes (Little), were living in Ieverstown, Co Clare, when their daughter, Agnes Margaret Comerford, was born in Limerick on 24 November 1899.

OWEN COMERFORD (1869-1945), who died at Gardenhill House in Castle Connell, Co Limerick, on 15 June 1945, was a member of the Rathdrum branch of the Comerford family from Co Wicklow who lived at Ardavon House, Rathdrum, Co Wicklow, and owned Rathdrum Mills.

Owen later went to live with his daughter and son-in-law, at Gardenhill House, Castleconnel, Co Limerick. This house, built by the Blackhall family, is a substantial version of the characteristic three-bay two-storey house. Retaining much of its original form, the façade is enlivened by the timber sliding sash windows, limestone sills and slate roof. The ornate doorway adds artistic interest to the façade. The outbuildings add context to the composition and enhance the overall group setting.

Owen Comerford died at Gardenhill House, Castleconnell, Co Limerick, on 15 June 1945. Owen and Kathleen were the parents of an only daughter: