‘We continue to write
our own, new stories
in the shadow of history’ 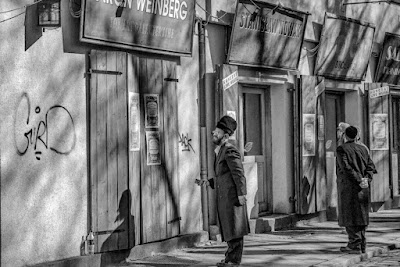 When I was visiting Auschwitz some years ago, I stayed for the best part of a week in Krakow’s old Jewish quarter, Kazimierz, visiting the surviving synagogues, the remaining Jewish graveyards, museums, shops and restaurants.

Kazimierz has the most extensive and intact collection of Jewish built heritage in central Europe, including seven synagogues and two Jewish cemeteries, as well as prayer houses, tenements, squares, and other infrastructure.

On this Friday evening, I am poring over a new book of photographs — available online — documents the transformation of Kazimierz, from a derelict post-Holocaust ghost-scape to one of the major Jewish heritage attractions in Europe.

The book, Krakowski Kazimierz: Faces & Places, is a collection of photographs by Jerzy Ochoński, who first started visiting Kazimierz and taking photographs there in the late 1970s and continues to document the neighbourhood and its people today.

His new book is a Flipbook and is available free online HERE.

Earlier this week, Jewish Heritage Europe (JHE) described how Ochoński’s earliest photographs show Kazimierz as a depopulated slum, its buildings crumbling and its Jewish heritage all but forgotten except by the tiny remnant Jewish community.

Over the decades, his images show the dramatic changes, particularly with the launch of the Krakow Jewish Culture Festival in 1988 and the post-communist development of Jewish heritage-themed tourism.

‘Over the years, I have taken thousands of photos in Kazimierz – some better, some worse,’ Ochoński has told the website Notes from Poland. ‘I still photograph the district, as I am fascinated with its history and culture, which I am constantly exploring and learning about.’

Ochoński’s images focus on specific buildings, Jewish heritage sites – such as the synagogues and cemeteries – people, and general street scenes. They encompass the Jewish community and other local residents, as well as visitors, ranging from orthodox Jews to revellers at the annual Jewish Culture Festival, to patrons at the popular pubs and cafés that make up the trendy new tourism and nightlife scene.

One two-page spread in the book contrasts the façade of the 19th century Tempel synagogue in 1985, with the same façade 30 years later — the synagogue underwent a full restoration in the 1990s.

Jakub Nowakowski, the Director of the Galicia Jewish Museum in Kazimierz, says in the foreword that the photographs bring home that Kazimierz is a place full of complexities and nuance that reflect its layers of history.

‘But Kazimierz is not all about absences.

‘We continue to write our own, new stories in the shadow of the history of the Kazimierz Jews. Sometimes these stories are linked to the past and occasionally they have an inextricable connect with it [….] More often than not, however, these stories have nothing in common with this Jewish world. they fill the space with their voices, they reimagine it and they write their own stories.’

Click HERE to read the article on Notes from Poland.

Praying with the saints in Ordinary Time: 25 February 2022

The Church Calendar is now in Ordinary Time until Ash Wednesday next week (2 March 2022). During this month in Ordinary Time, I hope to continue this Prayer Diary on my blog each morning, reflecting in these ways:

‘Hope, O my soul, hope. You know neither the day nor the hour. Watch carefully, for everything passes quickly, even though your impatience turns a very short time into a long one.’

1 He left that place and went to the region of Judea and beyond the Jordan. And crowds again gathered around him; and, as was his custom, he again taught them.

2 Some Pharisees came, and to test him they asked, ‘Is it lawful for a man to divorce his wife?’ 3 He answered them, ‘What did Moses command you?’ 4 They said, ‘Moses allowed a man to write a certificate of dismissal and to divorce her.’ 5 But Jesus said to them, ‘Because of your hardness of heart he wrote this commandment for you. 6 But from the beginning of creation, “God made them male and female.” 7 “For this reason a man shall leave his father and mother and be joined to his wife, 8and the two shall become one flesh.” So they are no longer two, but one flesh. 9 Therefore what God has joined together, let no one separate.’

The Prayer in the USPG Prayer Diary today (25 February 2022) invites us to pray:

Let us pray for children, who are the present and future of the Church. May we treat children with respect, care and consideration.