Remembering the Chinese martyrs on a Chinese scroll 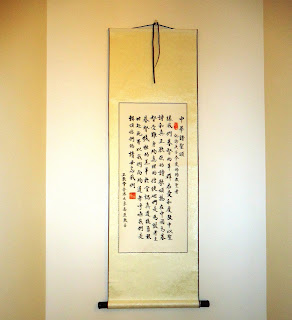 The Church Calendar today [11 June] commemorates Saint Barnabas (Βαρναβᾶς), the companion of the Apostle Paul, who is revered as an apostle (Acts 14: 14) and as the founder of the Orthodox Church in Cyprus. Saint Barnabas was born Joseph in Cyprus and was one of the early disciples in Jerusalem (Acts 4: 36).

Saint Barnabas and the Apostle Paul travelled together on many missionary journeys, defended Gentile converts against the Judaisers, and took part in the Council of Jerusalem. His Greek-speaking Levite parents called him Joseph (Ιὠσης, Iōsēs), but when he sold all his goods and gave the money to the apostles in Jerusalem, they gave him a new name: Barnabas, bar naḇyā, meaning υἱός παρακλήσεως (hyios paraklēseōs, meaning “son of consolation” or “son of encouragement,” see Acts 4: 36).

Barnabas is one of the first teachers of the church at Antioch (Acts 13: 1), and also laboured in Cyprus (see Acts 15: 36-41). According to later tradition, Saint Barnabas was martyred at Salamis (Constantia) in Cyprus in the year 61. It is said he was dragged from a synagogue, tortured and then stoned to death in front of his kinsman, John Mark, who later recovered his body and buried him privately beneath a carob tree.
The story of Barnabas, including his missionary work, his apostolic ministry, and his martyrdom, has many parallels with the story of Saint Mitrophan and the Chinese Martyrs, who are also commemorated in the Calendar of the Orthodox Church today [11 June].
Ffar east
Recently, while we were redecorating the house and re-hanging paintings, prints and photographs, I came across an elaborate Chinese scroll that commemorates those Chinese martyrs. The scroll had been presented to me in Hong Kong by Metropolitan Nikitas (Lulias) of Dardanellia.

We first met in San’Anselmo, the Benedictine abbey and university in Rome, at the Fifth European Ecumenical China Conference in 2005. He was then the first Greek Orthodox Metropolitan of Hong Kong and Southeast Asia.

At the time I was secretary of the Dublin University Far Eastern Mission, and we met again in Hong Kong the following year, when he presented me with a scroll that says in rich Chinese calligraphy:

There has been an Orthodox presence in China since the arrival of Orthodox Christians from Russia in the 14th-17th centuries, and the Orthodox Church in China began being organised in the 19th century.

From 1860, the Bible and liturgical and spiritual books were translated into Chinese, and the number of native Chinese Orthodox Christians began to increase. In 1897, Archimandrite Innocent (Figurovsky) was sent to China to build on this Orthodox mission work.

The Boxer or Yihetuan Movement, a pro-nationalist uprising by the “Righteous Harmony Society” in China, gathered pace in 1898-1901. They opposed foreign imperialistic nations and Christianity, and claimed that in China’s weakened economic state Christian missionaries would take over large tracts of land and place the Chinese under servitude.

In June 1900, Boxer fighters, with the support of Dowager Empress Cixi, forced foreigners to seek refuge in Beijing’s Legation Quarter. The siege lasted for 55 days and ended when 20,000 troops from an eight-nation alliance, defeated the Chinese Imperial Army and captured Beijing. The Boxer protocol of September 1901ended the uprising and placed severe punishments on all involved.

The “Boxer Rebellion” reached its climax in 1900, with assaults against all “foreigners” marked by an incredible degree of cruelty and brutality. The small, Russian-directed Orthodox Mission in Beijing was one of the targets of the rebels. On 1 June 1900, the building belonging to the Orthodox Mission in Beijing was burnt down, with all its printing and equipment, along with the Orthodox Church of the Theotokos. 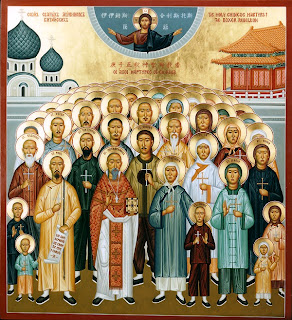 On 11 June, the frenzied rebels set fire to the homes of Orthodox people, who were assembled together and murdered. Men, women, and children were tortured, dismembered, disembowelled, strangled, burnt and beheaded. Others were led out of the city to Chinese temples, where they were ritually burnt to death.

The martyrs included the first and only Chinese Orthodox priest at the time, Father Mitrophan (also Metrophanes) Tsi-Chung.

Father Mitrophan was born on 10 December 1855. His father died when he was a child and was he was raised by his grandmother, Ekaterina, and his mother Marina, a teacher. At the age of 25 he was ordained priest by Bishop Nikolai of Japan in 1880. He spent the next 15 years translating and proofreading liturgical books, building churches, and tending to the needs of his small parish.

When the Boxer Rising broke out, many Orthodox Christians fled to him to find solace and support. The Boxers seized Father Mitrophan, murdered his 23-year-old son, Isaiah, before his very eyes, and tortured his wife, Tatiana, and their younger, eight-year-old son, John.

“Do you deny Christ?” they asked the priest’s son John. When he boldly replied that he would never deny him, they cut off his nose, ears, and toes. The child endured with astounding and calm self-denial. “It is not difficult to suffer for Christ!” he confessed in exaltation, to the astonishment of the onlookers.

The next day, he was slain along with his mother, Tatiana, and Maria, the 19-year-old fiancée of his brother Isaiah. Tatiana had been saved from the Boxers with help of Isaiah’s fiancée, Maria. But on the morning of 12 June she was seized with 19 others and sent to Xiaoyingfang, where the Boxer camp was located, and was beheaded. An almshouse for the poor was built on the site of her execution.

Maria had been allowed to leave in order to save herself, but she preferred to remain in the house of her prospective father-in-law, Father Mitrophan, and of her martyred fiancé, Isaiah. She showed great courage in helping others to escape, helping them to scale the walls around the family’s yard. “I was born here, near the Church of the All-Holy Theotokos, and here I will die!” she said with courage and determination.

Father Mitrophan was stabbed in the chest countless times, and he fell dead beneath a date tree in his own yard.

The small Orthodox Mission in Beijing had about 1,000 members. Of these, 222 were martyred, although only a few of them are known by name. The other martyrs included the catechist, Paul Wan, the mission’s teacher, Ia Wen, Clement Kui-Kin, Matthew Hai-Tsuan, his brother Vitus, and Anna Chui.

Meanwhile, Archimandrite Innocent (Figurovsky) was consecrated Bishop of Beijing. He returned to Beijing after the Boxer Rising was defeated, and gathered up the remaining relics of the martyrs. He built the Church of All the Holy Martyrs on the site of the sacrifice of their martyrdom and placed the relics of the Chinese New Martyrs in the crypt in 1902.

The saints were honoured immediately. The one remaining member of Father Mitrophan’s family, his son Father Sergei, became an archpriest and a faithful servant of the Orthodox Church. The Orthodox Mission in China continued its activities for over half a century, until the last Russian priest was expelled from China in 1956.

Metropolitan Nikitas is now the Director of the Patriarch Athenagoras Orthodox Institute in Berkeley, California, a member of the Graduate Theological Union of the University of California at Berkeley. The scroll gave me in Hong Kong commemorating the Chinese Martyrs, who are commemorated today, is now hanging above my stairs.