High waves and high towers
in Killala and Enniscrone 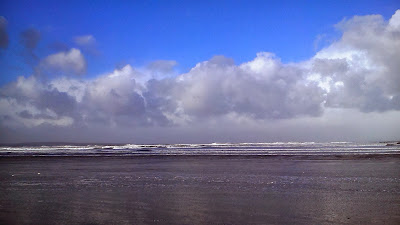 The small coastal village of Killala is only 10 km north of Ballina, Co Mayo, and after checking out of the Ice House Hotel two of us drove along the westerrn bank of the estuary of the River Moy to Killala this afternoon.

Killala’s skyline is dominated by a 12th century round tower and Saint Patrick’s Cathedral, built on the site of a fifth century chapel.

Saint Patrick’s Cathedral is one of smallest and oldest cathedrals in the Church of Ireland. According to one tradition, Foclut (Foghill) near Killala was the site of Saint Patrick’s first landing in Ireland and he worked in the hills above the town as a shepherd boy. Legend also says he founded the Diocese of Killala ca 434-441 and appointed Saint Muredach, one of his disciples, as bishop.

In a well close to the town, local legend says, Saint Patrick baptised 12,000 converts in a single day and raised a dead woman to life. A monastic settlement grew up around the site, and by mediaeval times it had become a town.

But if the stories about early Killala hold any germ of truth, little or nothing is known of the successors of Saint Muredach in Killala. All that is said of the sainted Bishop Cellach, in the sixth century is that he came of royal blood and was foully murdered at the instigation of his foster-brother. The Diocese of Killala was not fully recognised until the Synod of Raith Bressail in 1111. 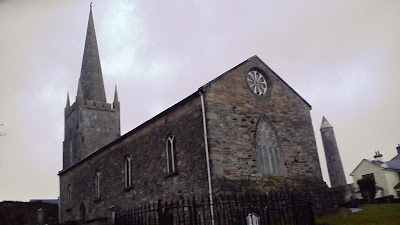 Saint Patrick’s Cathedral, Killala, and the round tower stand on an early site, but the present cathedral dates from the 1670s (Photograph: Patrick Comerford, 2014)

The small cathedral has a long rectangular, four-bay gable-ended nave (32 metres x 10 metres) with a square tower and spire at the west end and a gable-ended vestry at the north end. A staircase leads to a gallery in the nave. The nave is fitted with boxed pews and a rare Telford organ dating from 1838. The nave and chancel walls and the windows were renovated in the early 1990s and there are plans to restore the organ soundboard. 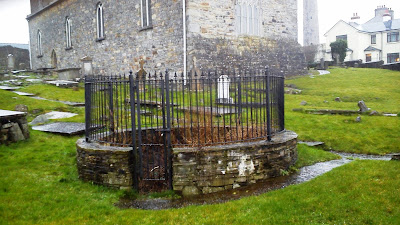 The cathedral churchyard in Killala has a ninth-century souterrain with several chambers (Photograph: Patrick Comerford, 2014)

The cathedral churchyard has a ninth-century souterrain with several chambers, which some say lead into the Round Tower. The nearby Round Tower is 25 metres high and the lowest entrance is 3.3 metres above ground level.

At the small harbour we sat for a while watching the high waves moving into Killala Bay. This harbour and bay are linked Killala’s role in the 1798 Rising. In August 1798, a small French force commanded by General Humbert landed at Kilcummin Harbour. From the Old Deanery, Bishop Joseph Stock sent his two sons to welcome them to Killala. Humbert’s force defeated the British troops holding Killala, quickly seized the town, and commandeered the bishop’s palace as their headquarters. 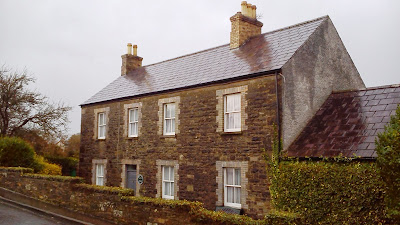 For 32 days, Killala remained under Irish-French rule, and hundreds of volunteers poured into the area. The Irish/French army got as far as Ballinamuck, Co Longford, before being outnumbered and defeated by an army led by Lord Cornwallis. Killala was also the site of the last land battle of the rebellion on 23 September 1798 when the British army defeated a rebel Irish force. 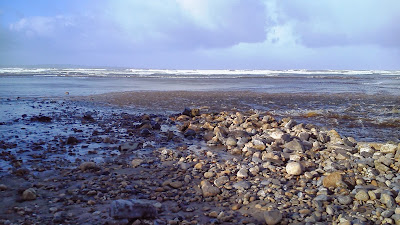 From Killala, we returned to Ballina, and drove north along the eastern bank of the Moy Estuary to the small seaside town of Enniscrone in Co Sligo, and a walk along its lengthy sandy beach. The beach is split near the lower part of the village by a small river crossed by a narrow footbridge.

We had lunch in Tracey’s Café beside the beach, which has a surf shop over the café selling wetsuits, surfboards, and body boards, before heading on along the Sligo coast through Easky to Skreen, where Edward Nagle was he Rector after he had relinquished his engagement with the Achill Mission. 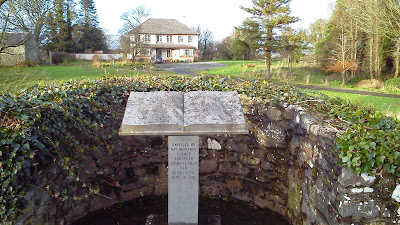 It is said the first Abbot of Skreen Abbey was Saint Adomnán, the first biographer of Saint Columba (Colmcille) and one of his successors at Iona. Saint Adomnán is known for his “Law of the Innocents,” protecting women, children, and other non-combatants during war. The abbey stood on the site of the present Church of Ireland parish church.

Across the road from the church, the rectory stands on the site of the Old Rectory, where Sir George Gabriel Stokes (1819-1903) was born on 13 August 1819. His father, the Revd Gabriel Stokes, was Rector of Skeen. Stokes, who gave his name to the Stokes Theorem, was a mathematician, physicist, politician and theologian, and was the Lucasian Professor of Mathematics at Cambridge University from 1849 until his death in 1903.

Stokes held conservative religious views. In 1886, he became president of the Victoria Institute, founded to defend evangelical Christian principles against challenges from the new sciences, especially Darwin’s theory of evolution. He gave the 1891 Gifford lecture on natural theology, and was vice-president of the British and Foreign Bible Society.

From Skreen, we skirted Ballysadare and by-passed Sligo, and then stopped to see the monument to Bartholomew Teeling at the site of the Battle of Collooney. We drove on through Co Roscommon by the shorelines of countless lakes, and crossed the River Shannon at Carrick-on-Shannon on the Roscommon-Leitrim border. It was dark when we stopped for coffee in Enfield, Co Kildare, on the way home. 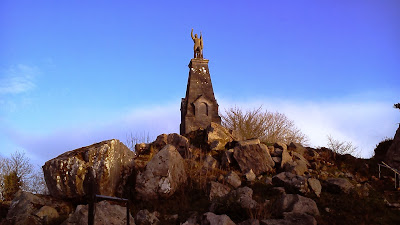 The monument to Bartholomew Teeling at the site of the Battle of Collooney (Photograph: Patrick Comerford, 2014) 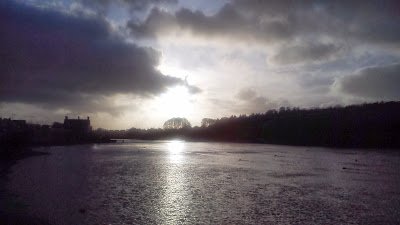 Sunset behind the Beleek Woods on the banks of the River Moy last night (Photograph: Patrick Comerford, 2014)

I awoke this morning with a view across the broad estuary of the River Moy to the Beleek Woods through the full length, ceiling-to-floor window in my room in the Ice House Hotel on the Quay in Ballina.

The woods include a variety if conifer trees such as Norway Spruce, Scots Pine, Silver Fir, as well as Beech, Oak and Ash. Despite last night’s storm, the river is alive with swans and herons, and a seal is bobbing up and down in the water.

The 30 rooms have no numbers – instead they have names like Vermillion, Saffron, Monterey and Leaf – and I have been staying in Salmon on the top floor. After this week’s four-part drama on RTÉ, I wonder whether they are going to change the name of Amber, which is also on the top floor?

This part of Ballina on the eastern side of the Moy Estuary, including the Quay, was a part of Co Sligo until it was transferred to Co Mayo by legislation in Westminster in 1898.

With a population of 10,361 (2011), Ballina is second largest town in Co Mayo after Castlebar. The town dates back to 1375 and the foundation of an Augustinian friary, but Ballina only became a town in 1723. 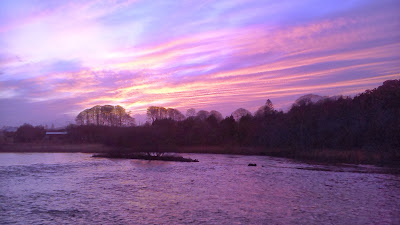 Just before sunset yesterday, two of us walked along the banks of the river as far as the old fishing area at the Quay. The sun was setting behind the trees in Beleek Wood as we walked back to Ice House, where we had dinner looking out onto the river.

This morning, it is raining heavily and there is a strong wind. Where I shall go this morning? To see the cathedral in Killala or for a walk on the beach at Enniscrone? 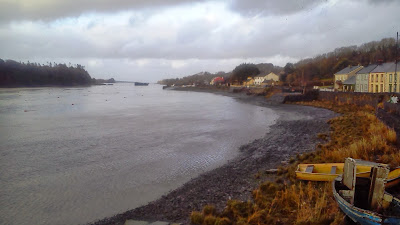 The broad estuary of the River Moy at the Quay in Ballina (Photograph: Patrick Comerford, 2014)

Posted by Patrick Comerford at 09:44 No comments: