Mendelssohn and the Golem
defied Nazi plans In Prague

I have taken a week off for a much-needed break, and I have been staying in Dingle in Co Kerry, and Skibereen and Glengarriff in Co Cork, visiting the Great Blasket Island and some of the other offshore islands in this corner of south-west Ireland.

I have also taken some reading with me, including Fergus Butler-Gallie’s new book, Priests de la Résistance! (London: Oneworld, 2021), a humorous but pungent account of ‘the loose canons who fought fascism in the 20th century.’

There are 15 portraits of a variety of figures, for, as he writes, ‘Wherever fascism has taken root, it has met with resistance.’

The 15 people he portrays range from Jonathan Daniels, an Episcopal seminarian who took bullet for a frightened schoolgirl, to Bishop Chrysostomos of Zakynthos, who saved Greek Jews with fake IDs. There are 15 people in this book, but not all are priests, nor are they canons or ‘hard-drinking, chain-smoking clerics’ as claimed on the cover, but all were willing to risk their lives for what they believed.

The combination of humour and pungent alacrity is introduced at the very beginning in this book as Butler-Gallie recounts the Nazi occupation of Prague, and the Czech undoing of the Gestapo director Reinhard Heydrich, who arrived in 1941 as ‘Protector’ of Bohemia and Moravia, a story that is an appropriate reflection on a Friday evening:

‘A key part of Heydrich’s programme was to demonstrate the superiority of the Reich’s Teutonic culture over all others – but especially over the ‘degenerate’ Slavic and Jewish cultures, both of which were in abundant evidence in the city of Prague.

‘As befits the birthplace of Don Giovanni, Prague is home to myriad opera houses, musical theatres and concert halls. Perhaps the grandest of these is the Rudolfinum, … its roof ringed by statues of the great composers …

‘Heydrich, so the story goes, became aware that among these inanimate virtuosi there was a stone Mendelssohn, a composer despised by the Fuhrer on account of his Jewish birth. Consequently, the Reichsprotektor ordered the removal and destruction of the offending sculptor. A group of soldiers were dispatched to the concert hall accordingly, only to be met with tight-lipped silence as to which statue was, in fact, Mendelssohn from the building’s curators …

‘Frustrated, the soldiers … sourced a tape measure with which they proceeded to measure the noses of each of the statues. Having established which symphonist had the most sizeable conk, they began to have it removed, only for an onlooker to shout up that the figure they were in fact removing was Richard Wagner, Hitler’s favourite composer.’

The real tragedy is that this story is based on a real-life event. In all, more than a quarter of a million Czechoslovak Jews were murdered in the Holocaust and only 15,000 had survived by the end of World War II.

Jews first arrived in the Czechlands before the ninth century, and Prague eventually became the home of one of the largest Jewish community. The former Jewish Quarter is a Unesco World Heritage site, and the Old New Synagogue is the oldest working shul.

Prague is the city of the Golem, and the city where Hitler planned to turn into a ‘Museum of Extinct Race.’ Historians now see inter-war Prague and Czechoslovakia as keys to unlocking many aspects of modern Jewish identity. But this is also a community that almost ceased to exist due to the Holocaust and Communism.

On Sunday evening (20 June 2021), David Kraus is giving an online presentation, ‘In Golem's Shadow: The Jews of Prague between Reality and Fiction.’

David Kraus was born in Prague into a Jewish family that was settled in Prague before the 14th Century. He was a leading youth activist in Czech Jewry in the late 1990s and the 2000s, and chair of the Czech Union of Jewish Students. He has been a lay leader of the Czech Jewish Community for over a decade, co-ordinating a number of projects in the Czech Republic.

Prague at night … the city of the Golem, and the city where Hitler planned a ‘Museum of Extinct Race’ (Photograph: Patrick Comerford; click on imagefor full-screen view) The Duomo in Siena … work stopped with the Black Death in 1348 (Photograph: Patrick Comerford) 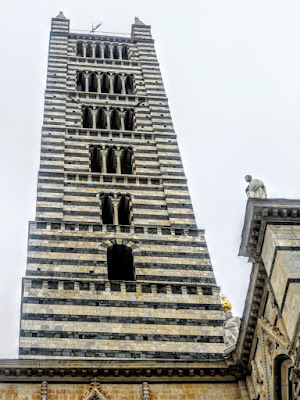 The bell tower of the Duomo in Siena has six bells (Photograph: Patrick Comerford)

Siena Cathedral (Duomo di Siena) is dedicated to the Assumption of the Virgin Mary, and is the episcopal seat of the Diocese of Siena, now the Archdiocese of Siena-Colle di Val d’Elsa-Montalcino.

Today, the planned transepts serve as the cathedral, and the magnificent faced at the north or liturgical ‘west end’ is in white, green and red polychrome marble, designed by Giovanni Pisano.

Outside and inside, the cathedral is built of white and greenish-black marble in alternating stripes, with the addition of red marble on the façade. Black and white are the symbolic colours of Siena, linked to black and white horses of the city’s legendary founders, Senius and Aschius. The finest Italian artists completed works in the cathedral, including Nicola and Giovanni Pisano, Donatello, Pinturicchio, Lorenzo Ghiberti, and Bernini.

There was a church on the site in the ninth century with a bishop’s palace. A synod in this church in December 1058 elected of Pope Nicholas II and deposed the antipope Benedict X.

The cathedral masons’ guild, the Opera di Santa Maria, was commissioned in 1196 to build a new cathedral. Work began on the north and south transepts, and it was planned to add the main, larger body of the cathedral later, although this enlargement never took place.

The cathedral was designed and completed in 1215-1263 on the site of an earlier church. It is in the shape of a Latin cross with a slightly projecting transept, a dome and a bell tower. The dome was completed in 1264, and the lantern was added by Gian Lorenzo Bernini. The bell tower has six bells, the oldest cast in 1149.

A second major addition to the cathedral was planned in 1339. This would have more than doubled its size, with of an entirely new nave and two new aisles.

Building work began under the direction of Giovanni di Agostino, but came to a halt with the Black Death in 1348 and never resumed. The outer walls, remains of this extension, can now be seen to the south of the Duomo. The floor of the incomplete nave is now a parking lot and a museum. One unfinished wall can be climbed by a narrow stairs for a high view of the city.

The façade is one of the most fascinating in Italy. Each of the cardinal points – west, east, north, and south – has its own distinct work. The most impressive is the west façade, a beautiful example of Sienese workmanship, which serves as the main entrance to the Duomo.

This west façade was built in two stages and combines elements of French Gothic, Tuscan Romanesque and Classical architecture. Work on lower part of the west façade began ca 1284. It was built in polychrome marble, and the work was overseen by Giovanni Pisano.

The lower portion of the façade follows Pisano’s original plans. Built in Tuscan Romanesque style, it emphasises a horizontal unity of the area around the portals at the expense of the vertical bay divisions. The three portals, surmounted by lunettes, are based on Pisano’s original designs, as are much of the sculpture and orientation surrounding the entrances. The areas around and above the doors and the columns between the portals are richly decorated with acanthus scrolls, allegorical figures and biblical scenes.

Pisano left Siena abruptly in 1296, and his work on the lower façade was continued by Camaino di Crescentino, who made a number of changes to the original plan. These included the instillation of a larger rose window based on designs by Duccio di Buoninsegna. But work on the west façade came to an abrupt end in 1317 when all efforts were redirected to the east façade.

The upper part of the west façade may have been completed in 1360-1370, using Pisano’s plans with some adaptations by Giovanni di Cecco, who was heavily influenced by French Gothic architecture. The upper portion also features heavy Gothic decoration in marked contrast to the simple geometric designs common to Tuscan Romanesque architecture.

Three large mosaics on the gables of the façade were made in Venice in 1878. The large central mosaic, the Coronation of the Virgin, is the work of Luigi Mussini. The smaller mosaics on each side, the Nativity of Christ and the Presentation of Mary in the Temple, are the work of Alessandro Franchi. The bronze central door, known as the Porta della Riconoscenza, dates from 1946.

On the left corner pier of the façade, a 14th-century inscription marks the grave of Giovanni Pisano. A column next to the façade has a statue of the Contrade Lupa, a wolf breast-feeding Romulus and Remus. According to local legend, Senius and Aschius, sons of Remus and founders of Siena, left Rome with the statue which they had stolen from the Temple of Apollo.

The Basilica of San Domenico in Siena, also known as the Basilica Cateriniana, is one of the most important churches in the city. This Dominican church was begun in 1226-1265, and was enlarged in the 14th century, giving the church the Gothic appearance it has today. 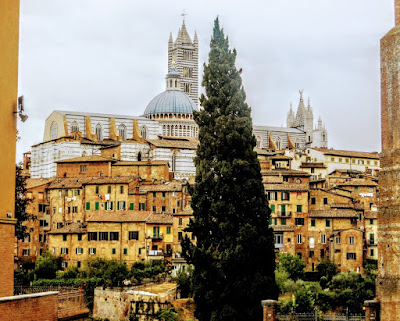 The Duomo of Siena seen from the Basilica Cateriniana (Photograph: Patrick Comerford)

[Jesus said:] 19 ‘Do not store up for yourselves treasures on earth, where moth and rust consume and where thieves break in and steal; 20 but store up for yourselves treasures in heaven, where neither moth nor rust consumes and where thieves do not break in and steal. 21For where your treasure is, there your heart will be also. 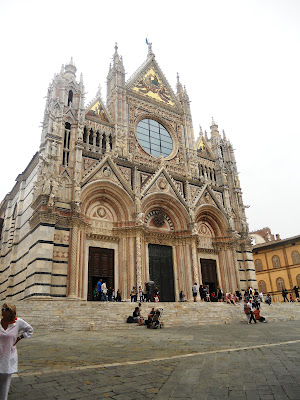 The cathedral of Santa Maria Assunta is one of the great examples of Italian Romanesque-Gothic architecture (Photograph: Patrick Comerford)

The Prayer in the USPG Prayer Diary today (18 June 2021, Bernard Mizeki) invites us to pray:

Let us give thanks for the life of Bernard Mizeki, African missionary and martyr. We pray for the institutions who continue to work in his name, such as Bernard Mizeki College in Zimbabwe and the St Bernard Mizeki Men’s Guild, which promotes Christian leadership across Southern Africa. 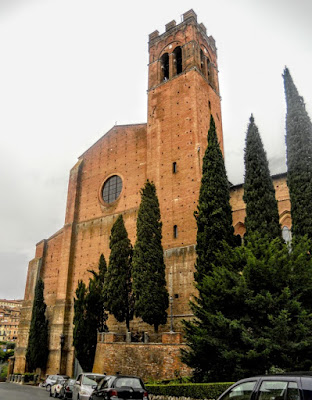 The Basilica of San Domenico in Siena is also known as the Basilica Cateriniana (Photograph: Patrick Comerford)