‘What is the late November doing
With the disturbance of the spring?’ 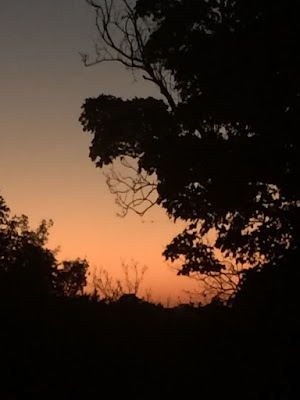 The unseasonable, summer-like weather on Sunday had vanished in a thick blanket of fog by Monday morning, but the bright blue skies returned later in the day [2 November 2015], so that the sunset gave summer-like qualities to the evening.

Sunday was the hottest November day ever recorded in Ireland, with temperatures reaching 20.1 degrees in Dooks, Co Kerry. As sunset approached yesterday, I was putting my finish touches to notes on TS Eliot in preparation for a tutorial group next Saturday [7 November 2015] as a group of part-time MTh students begin to look at Anglican poets, poetry and spirituality.

Yesterday was All Souls’ Day, and as I worked on these notes I was reminded of some lines by Eliot in ‘East Coker’:

I said to my soul, be still, and let the dark come upon you
Which shall be the darkness of God.

But as I continued working, the confusion of the seasons also reminded me of other lines in ‘East Coker’:

What is the late November doing
With the disturbance of the spring
And creatures of the summer heat,
And snowdrops writhing under feet
And hollyhocks that aim too high
Red into grey and tumble down
Late roses filled with early snow?

‘East Coker’ (1940) has been described as a poem of late summer, earth, and faith. According to Eliot, the poetic aspects of the poem are grounded in the tradition of John Cleveland, Edward Benlowes, William Blake, and the early work of William Butler Yeats.

In this poem, Eliot writes about time and disorder within nature that is caused by humanity following only science and not the divine. The only way for humanity to find salvation is through pursuing the divine by looking inwards and realising that humanity is interconnected. Only then can we understand the universe.

I am looking forward to a long awaited, two-volume, annotated critical edition of TS Eliot’s poems which is being published later this week, on Thursday [5 November].

This authoritative edition of The Poems of TS Eliot is edited by Christopher Ricks and Jim McCue. It provides, for the first time, a fully scrutinised text of Eliot’s poems, carefully restoring accidental omissions and removing textual errors that have crept in over the full century in which Eliot has been so frequently printed and reprinted.

This year marks the 50th anniversary of TS Eliot’s death in 1965, and this new edition also presents many poems from his youth that were published only decades later, as well as others that saw only private circulation in his lifetime, of which dozens are collected for the first time.

The edition is in two volumes. Volume I – Collected and Uncollected Poems – respects Eliot’s decisions by opening with his Collected Poems 1909-1962 in the form in which he issued it, shortly before his death 50 years ago.

This first volume then follows with the uncollected poems from his youth that he had chosen to publish, along with other poems that were considered suitable for publication.

Volume II – Practical Cats & Further Verses – opens with the two books of poems of other kinds that he issued, Old Possum’s Book of Practical Cats and his translation of Perse’s Anabase, moving then to verses privately circulated as informal or improper or clubmanlike. Each of these sections is accompanied by its respective commentary, and then there is a comprehensive textual history recording variants in both the manuscript and the published forms.

To accompany Eliot’s poems, Christopher Ricks and Jim McCue have provided a commentary that illuminates the creative activity that came to constitute each poem, calling upon drafts, correspondence and other original materials to provide a vivid account of the poet’s working processes, his reading, his influences and his revisions.

Volume I is 1344 pages, Volume II is 688 pages, and each has a cover price of £40. They are due to be published by Faber on Thursday [5 November 2015]. I have ordered both volumes, although I doubt they will arrive in the post before next Saturday’s tutorial meeting.

Meanwhile, an adaptation of Eliot’s classic verse drama Murder in the Cathedral was released last month [October 2015] for the first time on Blu-ray and DVD in a strictly limited dual format edition. 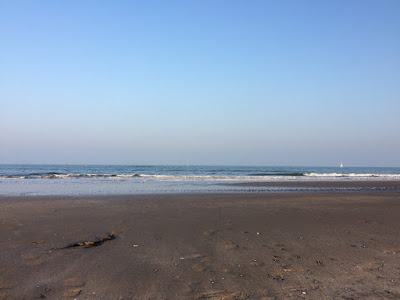 Unseasonable weather on the beach at Malahide on Sunday ... it was more like spring or summer than November (Photograph: Patrick Comerford, 2015)