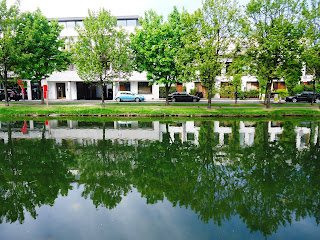 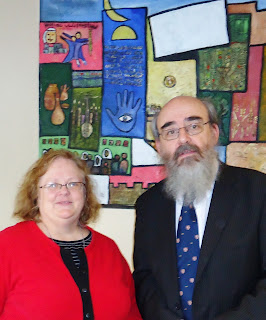 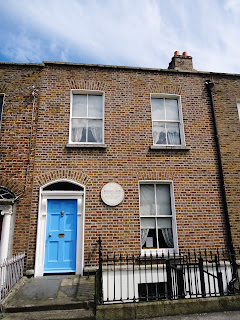 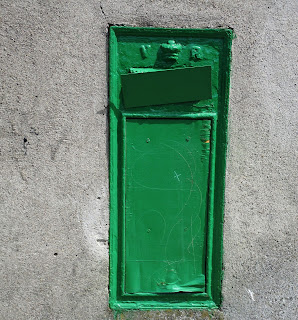 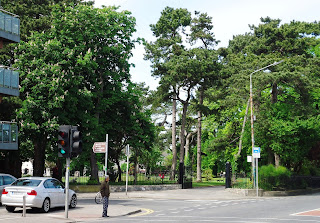 A quiet afternoon in Cong, the village of ‘The Quiet Man’ 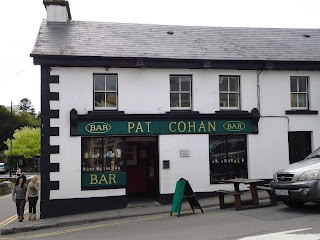 Pat Cohan’s Bar … the location for many of the scenes in ‘The Quiet Man’ (Photograph: Patrick Comerford, 2013)

On the way back from Ballinrobe on Sunday afternoon [26 May 2013], I stopped to see the village of Cong on the edges of Connemara and on border between Co Galway and Co Mayo.

Cong is best known for Ashford Castle and as the location for The Quiet Man. But Cong is also known for its fishing, for Ashford Castle, built by the Guinness family Abbey and now a five-star luxury hotel, as the burial place of Rory O’Connor, the last High King of Ireland, and the Cross of Cong, a metal cross shrine now exhibited in the National Museum in Dublin.

Cong (Conga or Cúnga Fheichín, Saint Feichin’s Narrows) stands on an island formed by many streams that surround it on all sides, and on an isthmus that connects Lough Corrib and Lough Mask, Cong is known for its underground streams that connect Lough Corrib with Lough Mask to the north. It was also the home of Sir William Wilde, historian and father to the writer Oscar Wilde.

Ashford Castle, now a five-star hotel, was built on the shores of Lough Corrib by Sir Benjamin Guinness. He also restored Cong Abbey, built Saint Mary’s, a new Church of Ireland parish church, laid out many of the tree-lined and forest walks, and planned the three-mile Cong Canal in the 1850s in a failed attempt to link Lough Corrib and Lough Mask as part of a safe transport link between Sligo and Galway.

Everywhere in the village there are reminders that Cong was the location for John Ford’s 1952 Oscar-winning film, The Quiet Man, located in the fictional village of Inisfree: the Quiet Man, the Quiet Man Museum and Gift Shop, Pat Cohan’s Bar, Danagher’s Hotel, Squire Danagher’s Bar, Michaeleen Oge Flynn’s House and the Isle of Inisfree, offering daily cruises on Lough Corrib

The movie, starring John Wayne (Sean Thornton), Maureen O’Hara (Mary Kate Danagher), Victor McLagen (Squire ‘Red’ Will Danagher) and Barry Fitzgerald (the matchmaker Michaeleen Oge Flynn), was filmed in Cong and in the grounds of Ashford Castle in 1951. Since then, the town and castle have changed little, and The Quiet Man has made Cong a major tourist destination for the last six decades.

The Quiet Man was based on a short story by Maurice Walsh first published in the Saturday Evening Post in 1933. The cinematography by Winton Hoch and Archie Stout was unique and unusual for its time, with their lush and colourful depictions of the Irish countryside.

Watching The Quiet Man today it appears to provide a patronising and sentimental picture of pre-modern or pre-industrial Ireland, an older society of dowries and donnybrooks, of cattle fairs and treating women like chattels. Others say the comic structure of The Quiet Man is very close to the Shakespearean comic pattern in Winter’s Tale or Cymbeline. In many ways this was a film before its time, for its presents an idealised Irish society in which there are no social divisions based on class or religion. The benign Church of Ireland Rector of Inisfree, the Revd Cyril Playfair, is played by Arthur Shields, and Philip Stainton has a cameo role as the unnamed Church of Ireland bishop.

In the days before a new ecumenism was ushered in by Vatican II, the Rector, the Revd Cyril Playfair, and the Parish Priest, Father Peter Lonergan (Ward Bond), have a friendship so warm that one helps boost the other’s Sunday church attendance figures so the parish can hold on to its own church and rector.

Today, Saint Mary’s Church in Cong is part of the Tuam Union of parishes, and the Dean of Tuam is also the Rector of Cong. 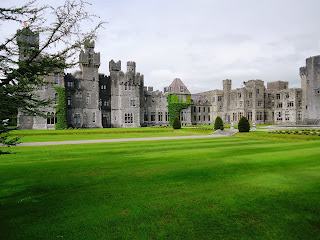 We followed the Heritage Trail around the village, visited Cong Abbey and the parish churches, followed some of the trails and walks through the trees and woods and across the lakes, viewed the ‘Dry Canal,’ and had a delightful lunch in the Happy Monk Café opposite the abbey before going on to visit Ashford Castle, a Gothic Victorian fantasy.

There were more stories to tell about a previous rector and his revolutionary daughter. But the whole story of Cong is worth telling at a later date.