River cruise with a touch of
Famine and Fiscal disaster 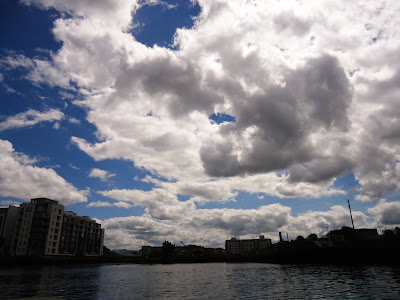 Midsummer’s Day arrived with mixed weather today: it was raining this morning, but after a short time at work, two of us headed into the city centre, and the sun was shining by the time we reached Christ Church Cathedral.

After lunch, we went on board the Spirit of Docklands for a different view of the city, the quays and the docks – this time from the River Liffey.

Our 45-minute tour started at Bachelor’s Walk, between O’Connell Bridge and the Ha’penny Bridge.

The tide was low, and so instead of heading west under the Ha’penny Bridge, we turned east and were brought under O’Connell Bridge, and continued under the new, as-yet-unnamed bridge that is still being built, under Butt Bridge, Sean O’Casey Bridge and Samuel Beckett Bridge, and on down the river as far as the East Link Toll Bridge.

Our guide offered good-humoured insights into the history of Dublin and of the River Liffey, from the arrival of the Vikings over 1000 years ago, to the rapid development of the city during the 18th and 19th centuries, to the birth of Dublin as a major European capital, and up to the subsequent decline and more recent redevelopment of Dublin’s Docklands. 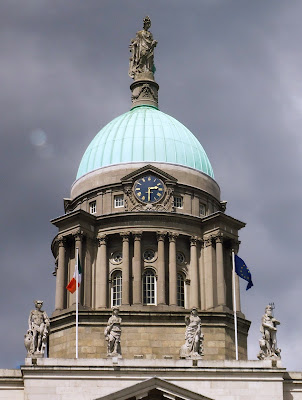 We passed Liberty Hall and Gandon’s masterpiece, the majestic Custom House, heard the story of the Royal and Grand Canals, of the Point Depot, the U2 studios at Grand Canal Dock, and the demise of the docks and the cross-river ferries.

We heard too how much of present-day Dublin stands on reclaimed land, including Trinity College and the Spire in O’Connell Street.

It is Midsummer, and yet our guide delighted at the summer weather. “Summer has arrived on a Friday,” he told us with a chuckle. “Last year, summer was on a Tuesday.” 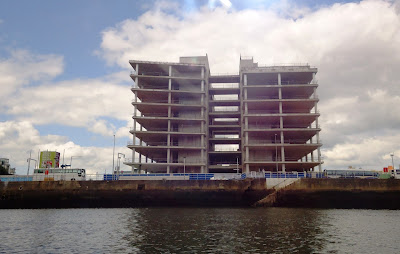 Because of the tidal conditions today, our journey came to an end at Custom House Quay instead of Bachelor’s Walk, beside the Famine emigrant ship, the Jeanie Johnston.

The Jeanie Johnston is docked permanently beside the Famine Memorial commissioned by Norma Smurfit and presented to the City of Dublin in 1997. The bronze sculptures on Custom House Quay were designed and crafted by the Dublin sculptor Rowan Gillespie as a commemorative work dedicated to Irish people who were forced to emigrate during the Famine in the 19th century.

The location of this sculpture is poignant: one of the first voyages of the Famine period was on the Perseverance, which sailed from Custom House Quay on Saint Patrick’s Day 1846 with 210 passengers. They all landed safely in New York two months later on 18 May 1846. 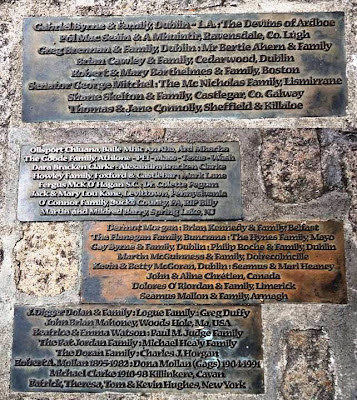 The betitled “Mr Bertie Ahern” … seeking to stand out from the crowd in the heart of Famine and Financial Disaster (Photographs: Patrick Comerford, 2013)

The names of sponsors are in bronze plates embedded in the ground surrounding the memorial. It is typical of the arrogance of a former Taoiseach that alone among the names he had himself described in a plaque as “Mr Bertie Ahern,” when every other sponsor – from the designer John Rocha or the actors Gabriel Byrne and Daniel Day Lewis, to the Irish international footballer Roy Keane, from television presenter Gay Byrne to the former Taoiseach John Bruton – is remembered simply by first name and family name, without honorific.

This cloying after dignity lacks any sense of decorum. But it also reflects the insensitivity of the man. How appropriate, I thought, that the Taoiseach who presided over the greatest financial crisis on this island – apart, perhaps, from the Famine – should have his name in the ground close to a sculpture that recalls forced emigration, and beside so many icons of the financial disaster for which he continues to refuse to accept any responsibility or blame – failed banks, failed financial houses, vacant office blocks and the almost empty shopping mall at CHQ.

I had to call myself back to mind to think again of the true significance of Rowan Gillespie’s sculpture. Here a scraggy dog, there a forlorn father or a bewildered mother. 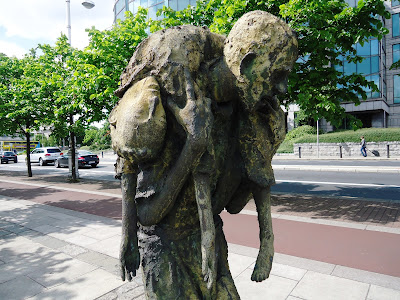 As I gazed on the image of a distressed father carrying a dying or dead child over his shoulders, I thought too of today’s Syrian refugees, the unconscionable violence that is the indulgence of every party to the conflict in Syria, and the slow response by politicians to relieve their distress as they play with the politics of the Middle East.

We are facing another humanitarian crisis on our doorstep. Have learned nothing from the disasters of the past?

A taste of Greece in Corfu on Parliament Street, Dublin (Photograph: Patrick Comerford, 2013)

After our river cruise, we strolled through the new financial heart of Dublin, and then back through Temple Bar to Christ Church Cathedral, for Evening Prayer in the Choir Stalls.

Earlier in the afternoon, we had lunch in Corfu, the Greek restaurant on Parliament Street – a vegetarian mezze for two, two glasses of wine, and two Greek coffees were so appropriate on Midsummer’s Day.

So check the schedules before planning your journey. Unlike the Viking Splash, you do not get to wear silly hats and to shout at passing tourists. But you get a new perspective of Dublin – try it before summer comes to an end. 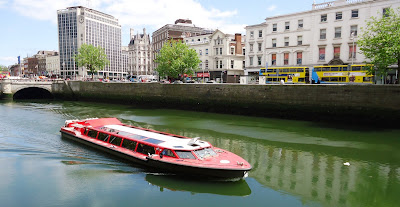 The ‘Spirit of Docklands’ at Bachelor’s Walk this afternoon (Photograph: Patrick Comerford, 2013)