Afternoon sunshine and tastes
of summer by the sea in Bray 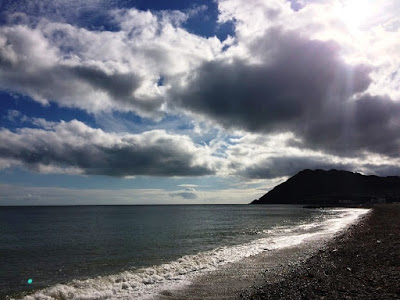 Sunshine on Bray Head and the sea off the Promenade in Bray this afternoon (Photograph: Patrick Comerford, 2015)

Despite all the predictions and the expectations, the bright autumn weather has continued for most of this week.

When he was managing the Hedgehog in Lichfield, Ron Brazier told me he knew when summer had arrived, because people naturally start to drift outdoors once the temperature had reached 16. It was as though they have a natural thermostat that makes them take their drinks out into the garden.

For the last few days the temperature in Dublin has managed to hover around 16, and although the mornings are getting darker and the evenings are beginning to close in much earlier, there have been warm, glowing – even dramatic – sunrises these mornings.

The temperature managed to rise above 17 in Bray, Co Wicklow, today when – ahead of a busy working weekend – I skipped out for a walk on the beach and around the harbour late this morning ahead of an early lunch in Carpe Diem.

The low but warm sun cast Bray Head into stark relief, with sparkling waters in the sea between Bray Head and Bray Harbour.

On the short sandy shore at the harbour, up to 20 swans were enjoying the mid-day sun, resting, preening themselves and sleeping. Two lone anglers were fishing off the north pier. But because it was a working day the harbour was quiet and no-one was sailing. 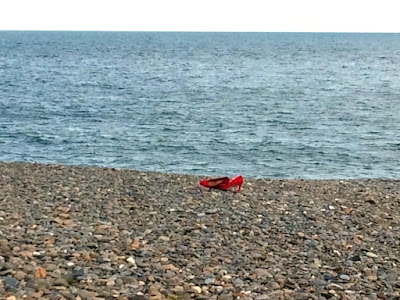 Back on the beach, a newly-married couple were posing for their wedding photographs. She had slipped off her red shoes and abandoned them on the pebbles. It was almost as though they had wished for a summer wedding.

In Cape Diem, lunch was fine Italian fare, along with one glass of Tuscan Vernaccia and two double espressos. 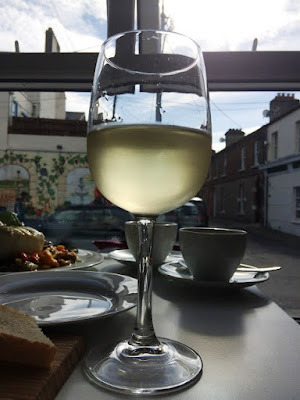 Vernaccia is a white wine most commonly associated with Vernaccia di San Gimignano from Tuscany. Wine historians argue about whether the grape’s origins are Eastern European, Greek or Roman.

The earliest recorded mention of the wine appears in the archives of record of San Gimignano from 1276. In the Middle Ages, a Vernaccia wine known as Vernage was popular in London.

It was good to head back to this working weekend with the warmth of sunshine and a taste of summer in Tuscany and Greece. 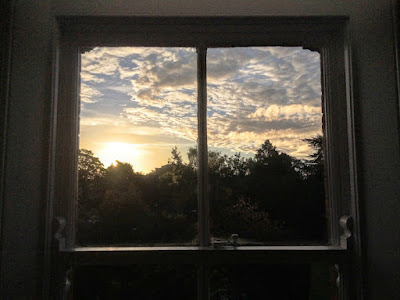 A typical sunrise one morning this week (Photograph: Patrick Comerford, 2015)

Posted by Patrick Comerford at 20:05 No comments:

A mediaeval bishop and ‘founder
of the tradition of scientific thought’

On this day [9 October], the Calendar in Common Worship recalls both Denis, Bishop of Paris, and his Companions, ca 250, and Robert Grosseteste, Bishop of Lincoln, Philosopher, Scientist, 1253 [see Common Worship, p. 14].

Robert Grosseteste has been described as ‘a mediaeval Dr Johnson in his powers of mind and personality.’ A leading Biblical scholar and commentator, he also wrote extensively on philosophy and science, and translated Aristotle. His biographer, Sir Richard Southern, said he was the greatest product of Oxford University but a man who ‘difficult to please and difficult to follow.’ AC Crombie, the Australian historian of science, describes him as ‘the real founder of the tradition of scientific thought in mediaeval Oxford.’

Grosseteste – his surname means ‘large-head,’ ‘Bighead’ or even ‘Fathead’ – was born into a peasant family in Stradbroke, Suffolk, about 1175. He may have studied in Oxford, where he is said to have distinguished himself in law, medicine, languages, natural sciences and theology, and in Paris.

He held various posts until, after a grave illness, he returned to Oxford ca 1229/1230, where he taught at the Franciscan house of studies. His students included the Franciscan Roger Bacon, who acquired an interest in the scientific method from him. He may have become what is now called Chancellor of Oxford University in 1224, and at the same time he was Archdeacon of Leicester and a canon of Lincoln Cathedral.

He became Bishop of Lincoln in 1235, then geographically the largest diocese in England. Soon after his appointment to Lincoln, Robert immediately set about om a thorough visitation of his diocese.

His attempts at vigorous reforms were opposed by the dean and chapter of Lincoln Cathedral, who argued they were beyond his jurisdiction as bishop.

In his first year as bishop, he deposed no fewer than 11 abbots and priors. He vigorously opposed the practice by which the Pope appointed Italians as absentee clergy for English churches and collecting salaries from those churches without ever setting foot in the country. He insisted that his priests spend their time in the service of their people, in prayer, and in study.

His dispute with the dean and chapter of Lincoln Cathedral was settled in 1245 when the Pope issued a bull giving the bishop full power over the chapter.

Grosseteste believed that the fundamental duty of the Church is pastoral and the care of souls. He explained what he meant at the Council of Lyons in 1250: ‘The pastoral charge does not consist merely in administering the sacraments, saying the canonical hours, celebrating masses, but in the truthful teaching of the living truth, in the awe-inspiring condemnation of vice and severe punishment of it when necessary. It consists also in feeding the hungry, giving drink to the thirsty, covering the naked, receiving guests, visiting the sick and those in prison … By the doing of these things is the people to be taught the holy duties of the active life.’

At the papal court in Lyons in 1250, he also denounced the Pope and the cardinals for ‘acting contrary to Christ’. The papal see, he told them, ‘the throne of God, the sun of the whole world … has been perverted and it has become a source of perdition and destruction.’

His wide-ranging interests covered mathematics, optics and many of the sciences. He translated large numbers of theological works from Greek and wrote his own theological commentaries and philosophical works.

It has been argued that Grosseteste played a key role in the development of the scientific method. His ideas about how the universe was created are close to the Big Bang Theory, he was the first scientist to identify the cause of the rainbow as refraction and he seems to have understood centuries before anyone else that the universe is expanding.

He introduced to the Latin West the notion of controlled experiment and related it to demonstrative science, as one among many ways of arriving at scientific knowledge. He was the first of the Scholastics to fully understand Aristotle’s vision of the dual path of scientific reasoning: generalising from particular observations into a universal law, and then back again from universal laws to prediction of particulars.

Grosseteste worked from Latin translations of Arabic versions of Aristotle’s texts. These had been translated from the original Greek by Islamic scholars. Jewish scholars based in southern Europe curated and distributed the texts to western scholars.

His commentary on Aristotle’s Posterior Analytics was one of the first and most influential of the mediaeval commentaries on this fundamental work. Other important writings belonging to the first period are his commentary on Aristotle’s Physics; independent treatises on astronomy and cosmology, the calendar (with proposals for the reform of the inaccurate calendar then in use), sound, comets, heat, optics, and other scientific subjects; and his scriptural commentaries, especially the Moralitates in evangelica, De cessatione legalium, Hexaëmeron and commentaries on the Pauline Epistles and the Psalms.

He began to study Greek in 1230-1231, and used this learning by translating into Latin translations Aristotle’s Nicomachean Ethics and De caelo, of the De fide orthodoxe of Saint John of Damascus, of Pseudo-Dionysius and of other theological writings. He brought assistants who knew Greek to Lincoln to work with him, and also arranged for a translation of the Psalms from the Hebrew.

His writings on the first chapter of Genesis include an interesting anticipation of modern cosmological ideas. He read that the first thing created was light, and said that the universe began with pure energy exploding from a point source.

In a paper in the journal Nature Physics last year [July 2014], a group of scientists discussed how they are re-examining Grosseteste’s work. They showed his contributions to the field of optics have yet to be assimilated into the canon of science. For example, his insight into the physics of rainbows enabled the researchers in the Ordered Universe Project at Durham and Oxford Universities to create a new co-ordinate system for colour.

Robert Grosseteste died at Buckden in Huntingdonshire on this day in 1253. He is buried in a tomb in his memorial chapel in Lincoln Cathedral.

A campaign was launched last year [2014] by Dr Jack Cunningham, a theology lecturer at Bishop Grosseteste University in Lincoln for a statue to be erected in Lincoln to Bishop Robert Grosseteste. ‘Grosseteste was revolutionary in the history of science because he knew that everything was about mathematics and that good scientists should base their knowledge on what they observe and not what they think,’ he says.

The plaque on his tomb says: ‘He was a man of learning and an inspiration to scholars a wise administrator while a true shepherd of his flock, ever concerned to lead them to Christ in whose service he strove to temper justice with mercy, hating the sin while loving the sinner, not sparing the rod though cherishing the weak.’

‘In the Divine Mind all knowledge exists from eternity.’