They were getting The Mall ready this morning for cricket this afternoon (Photograph: Patrick Comerford, 2013)

During this year’s General Synod, on my way between the Charlemont Arms Hotel, where I have been staying, and the Armagh City Hotel, which was the venue for the General Synod this year, I have enjoyed my strolls back and forth through the streets of this charming cathedral and market town, enjoying some beautiful architecture and streetscapes.

This morning, I turned from English Street into College Street, and walked along the Mall, taking a note of some more of my favourite architectural works in Armagh.

The Mall or Commons has been central to the leisure activities of people in Armagh for over 200 years.

In 1765, Richard Robinson arrived in Armagh as the new Archbishop. John Wesley once accused Robinson of being more interested in buildings than in the care of souls, but the new archbishop set about rebuilding Armagh, with a vision of redeveloping Armagh as a city to rival Dublin.

The Commons was once used as a race track and for horsefairs (Photograph: Patrick Comerford, 2013)

The Commons had been used from 1731 as a horse-racing track and for horse fairs, but this did not fit in with the Primate’s vision for his new city. He bought up the site, and made a gift of the new mall to the citizens of Armagh as a public walkway.

Over the years, the tree-lined promenade became an area for cricket, football and rugby. This morning in the rain this expansive grassy area in the heart of Archbishop Robinson’s primatial city, was being prepared painstakingly for an afternoon’s cricket match.

The Mall is home to Armagh Cricket Club, and this appeared to be such a natural use as I walked along The Mall this morning, that I was surprised to learn that the first recorded match here was as late as 1966, when Ulster Country played Munster. The ground hosted an international match in 2005, when Denmark beat the US by 96 runs.

The Courthouse, built between 1806 and 1809, was designed by Francis Johnston (Photograph: Patrick Comerford, 2013)

The Courthouse at the northern end is probably the most striking building on The Mall, Built between 1806 and 1809, the Courthouse was designed by Francis Johnston, who also designed the General Post Office in Dublin. The Courthouse was completely rebuilt in the mid-1960s. Further restoration work was carried out in 1993 after a 1,000 lb bomb exploded directly outside, causing major structural damage to the roof, façade and walls.

The latest extensive reconstruction and enlargement cost £8 million and the courthouse was officially opened by the Lord Chancellor in 1999. 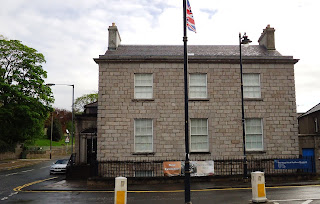 the Sovereign’s House is now the Museum of the Royal Irish Fusiliers (Photograph: Patrick Comerford, 2013)

Nearby, on the north-east corner of The Mall, the Sovereign’s House was first built as the residence of the Sovereign or Mayor of Armagh. The house was almost destroyed by car bombings in 1990s, but has since been restored sensitively was restored recently and is now houses the Museum of the Royal Irish Fusiliers. 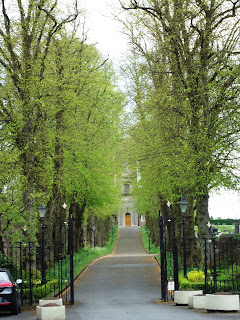 Saint Mark’s Church is hidden away at the top of a tree-lined avenue (Photograph: Patrick Comerford, 2013)

Saint Mark’s Church on the east side of The Mall is hidden away at the top of a tree-lined avenue. Saint Mark’s, which is the parish church of Armagh, dates from 1811. It too was designed by Francis Johnston, who designed so many other public buildings in Armagh.

My firend Canon John McKegney, who invited me to preach here on Good Friday 2011, is due to retire as the Rector of Armagh in a few weeks time. 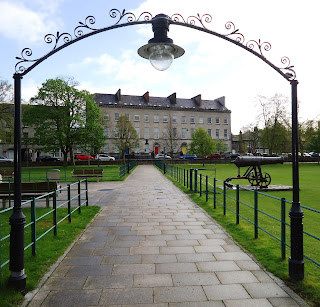 Beside the entrance to Saint Mark’s, Charlemont Place is an impressive terrace of three-storey houses built almost 200 years ago. This terrace of houses was built around 1830 but was badly damaged by a car bomb in recent violence. Since then, the terrace of houses has been restored lovingly by the Southern Library and Education Board. 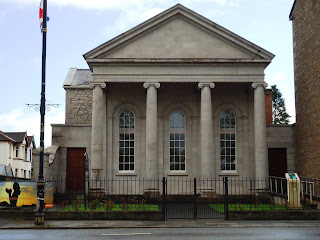 
On the other side of the entrance to Saint Mark’s is the Armagh County Museum. This was first built as a schoolhouse in 1834, and may have been designed by William Murray. 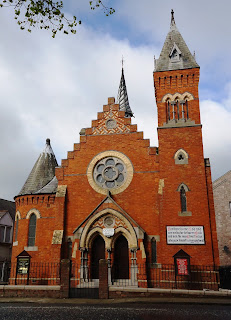 On the western side of The Mall is the former Masonic Hall, built in 1884 in a combination of architectural styles. The architect James Fullerton mixed “Venetian Gothic” and “Romanesque Revival” styles, providing fancy brickwork, conical and spiky spires, towers and turrets with dormers, Syrian arching and a rose window.

It is so ornate that it seems incongruous that a building like this serves today as a Gospel Hall. Sadly, it is not usually open to the public except at service times. 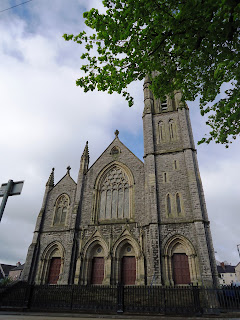 Armagh First Presbyterian Church on the corner of The Mall and Russell Street is in the Gothic Revival style (Photograph: Patrick Comerford, 2013)

Beside it, on the corner of The Mall and Russell Street, stands the First Presbyterian Church, a Gothic Revival Church built in the 1870s, but with a story that goes back to 1673, when the minister was the Revd Archibald Hamilton.

From1673 to 1722, the original congregation worshipped in the old Meeting House off English Street. A new church was built in Abbey Street in 1722, and continued in use until 1879. The building was recently incorporated into the Saint Patrick’s Trian Heritage Centre.

The foundation stone for the present church was laid in 1878 and the building was completed in the following year. This Gothic Revival church is an unusual style for Presbyterian churches. It is an immense, cathedral-like edifice, with four arched entrances at its West Mall elevation, pronounced buttressing and a tower, with a graceful, octagonal spire that is 56.4 metres high.

There is a profusion of pinnacles and pointed arches, and carvings in the shape of vines, acorns, scrolls and even a monkey, cast-iron railings and a wide flight of 11 stone steps leading to the entrance doors. The pipe organ was the first pipe organ to be played in a Presbyterian church in Co Armagh. 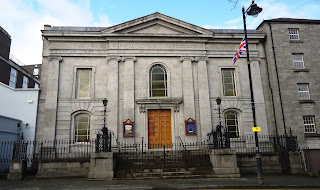 The Mall Presbyterian Church dates back to a split in the 1830s and is sometimes still known as the Scotch Church (Photograph: Patrick Comerford, 2013)

The second and third congregations were united in 1916, and today this church is known as The Mall Presbyterian Church, although the façade retains the name of the Scotch Church. The Revd Peter Gamble has been the minister since 2005.

The care of the Mall passed into the hands of the Mall Trustees, and by 2003 a partnership was formed with Armagh City and District Council.

The Heritage Lottery Fund granted an award for refurbishment aimed at updating the facilities of The Mall without losing its unique character. In 2005, The Mall won the Civic Trust Award and the Irish Architecture Award.

This morning's walk around The Mall left me yearning on my way to the Synod for more sunshine and more cricket this summer ... when summer arrives.

Posted by Patrick Comerford at 21:50 No comments:

Welcoming ecumenical guests at the General Synod in Armagh 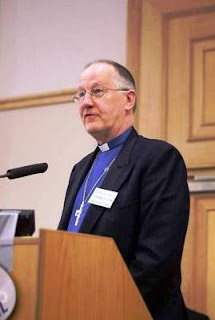 The President of the Methodist Church in Ireland, Revd Ken Lindsay, addressing the General Synod in Armagh

One of my roles at the General Synod of the Church of Ireland in Armagh this year was as one of the hosts for the ecumenical guests.

The Archbishop of Armagh, Dr Richard Clarke, said that the proposal allowing for the introduction of a special Bill at next year’s General Synod [2014] may be the most significant thing done at this Synod. “We are blazing a trail for other Churches,” he told the General Synod.

The Archbishop of Dublin, Dr Michael Jackson, said the Churches were now entering a more concrete situation where we can move forward together.

Motion 20 allows for a Special Bill to be brought to the General Synod in 2014 on the inter-changeability of ministry between the Church of Ireland and the Methodist Church in Ireland. It was proposed by the Dean of Cork, the Very Revd Nigel Dunne

After lunch, the Revd Ken Lindsay, President of the Methodist Church, spoke at the final session of synod, when he said he was looking forward to bringing back news of the overwhelming support for the inter-changeability of ministry. “I came as an outsider and I’m going away as one of you,” he said.

The Roman Catholic Archbishop of Dublin’s ecumenical adviser, Father Kieran McDermott, who was also a visitor this year, brought warm greetings from the Roman Catholic Church this morning. Referring to Archbishop Clarke’s presidential address, in which we were reminded of the effects of poverty on society, particularly on children, Father Ciaran said this should be a priority for churches and it should exercise the churches into action. “It is a mark of a functioning society that children can grow up to become possible – to become the person God created them to be,” he said.

The guests and visitors from other churches at the General Synod this year were:

The annual media awards were presented by Archbishop Clarke immediately after lunch this afternoon. In the ‘Social Media’ category, my Facebook page was runner-up; in the ‘Blogs’ category, this blog was ‘Highly Commended.’

Posted by Patrick Comerford at 17:38 No comments: