Leamy House, a unique
Tudor Gothic building
in the heart of Limerick 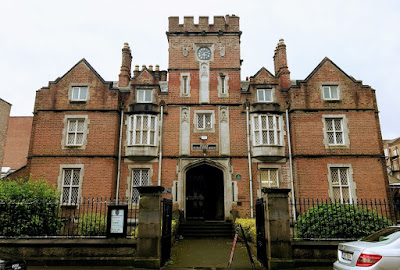 Although Frank McCourt divided Limerick opinion with his portrayal in Angela’s Ashes of squalor and poverty in the slums, he is celebrated in the heart of the city with a museum in his former school, and a sculpture outside.

The Frank McCourt Museum is based in the middle floor of Leamy House on Hartstonge Street, which runs between O’Connell Street and Pery Square. The museum was established in 2011 by the artist Una Heaton, and was opened by his brother Malachy McCourt.

This Tudor-style building, which would not be out of place at a Cambridge college, was formerly the Leamy School, and Frank and Malachy McCourt both went to school here. The museum includes the 1930s classroom of Leamy School and houses a collection of memorabilia, including school books of the period and old photographs donated by former pupils.

The museum has a large selection of memorabilia associated with Angela’s Ashes, and period props and sets from the film have been used to recreate the McCourt home on Roden Lane.

Although Frank McCourt was born in Brooklyn, the family returned to Limerick, his mother’s home town, when he was a child, and his schools included the Leamy School. 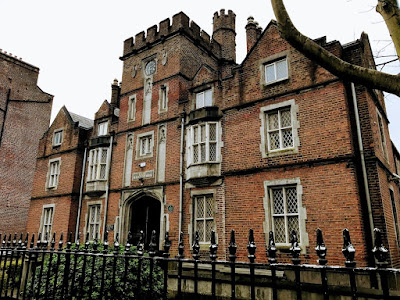 The Leamy Free Schools were built by William Atkins and Joseph Fogerty in the 1840s (Photograph: Patrick Comerford, 2017)

The Leamy Free Schools were established under a trust set up in the will of William Leamy, who left £13,000 for the education of the children of the poor in Limerick. Leamy spent his life on the high seas, and may have made his fortune through dabbling in piracy before he died in Madeira.

In 1841, the Court of Chancery decided how Leamy’s endowment should be administered. The pupils in Leamy’s School were to be taught without paying fees and to receive a good English education. Members of the Church of Ireland and Roman Catholics were to be taught in their own beliefs with lessons in the National Schools books. A sum of £3,940 was spent on the schools and site at Harstonge Street, while the interest on the balance was to maintain the facility.

This imposing building in the Tudor Revival style was designed by the architect William Atkins and built by Joseph Fogerty of Henry Street, Limerick. It has an elaborate façade and retains many of its original features, inside and out, that make it stand out from the other terraced buildings on this street, which are predominantly Georgian.

This is a detached, five-bay three-storey over basement Tudor Revival symmetrical brick school, built in 1841-1845, with a central crenellated tower and a four-bay, two-storey stone return. 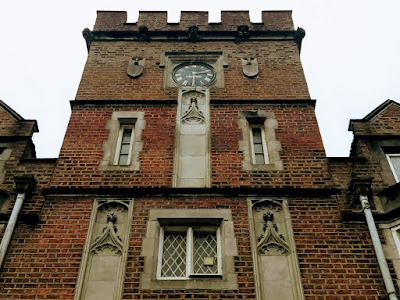 The square-plan tower rises a stage above the roof, with a crenellated parapet (Photograph: Patrick Comerford, 2017)

The square-plan tower rises a stage above the roof, with a crenellated parapet and cut saddle-backed limestone coping with a stone moulding below that has carved human and animal heads and a higher octagonal crenellated turret to the west.

To either side there is a half gable, while the outer bays form a pair of gabled breakfronts and a saddle-back limestone coping covers all the gables and parapets. The gabled breakfront is repeated to both side elevations.

The red brick wall was laid in Flemish bond and there is cement re-pointing on a moulded limestone plinth course with squared rough limestone at the basement level. To the rear there are rough-hewn squared snecked and coursed limestone walls.

There are square-headed window openings with smooth limestone ashlar splayed reveals. The windows have cross-casement timber window frames and these are mainly iron diamond pane windows, although there are uPVC replacement windows on the second floor. 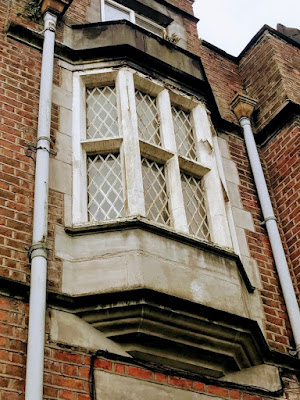 A three-sided oriel window beside the tower (Photograph: Patrick Comerford, 2017)

At the first floor, on either side of the tower, a three-sided oriel window has a smooth limestone surround and a moulded base and parapet, which forms a balcony to the half dormers above.

The tower has a limestone square panel to the upper stage with a hood-mould and clock flanked by a pair of heraldic decorations. Below the panel, a carved limestone panel has Tudor and Gothic arch mouldings. This panel is repeated as a pair to the stage below with a square-headed window to the centre and a rectangular panel below.

The flat-pointed arched limestone door opening has a hood moulding and a moulded stop-chamfered surround. There are double-leaf, timber-panelled doors with perpendicular arches to the upper panels, opening onto a limestone threshold and concrete steps that are flanked by a limestone ashlar wall that encloses the basement area. 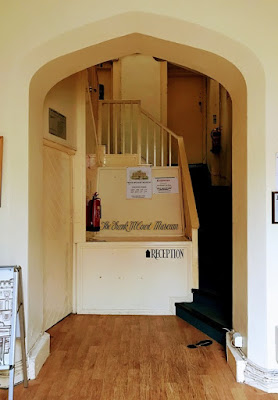 The entrance hall is vaulted and contains an intact internal door.

Outside, a path that was once gravelled leads through the front garden, which is enclosed by a low rock-faced limestone ashlar wall with a plinth, saddle-back coping and spear-headed iron railings. Matching gates hang from pair of high limestone ashlar piers.

The Cork-based architect William Atkins (1812-1887) was the fourth son of Dr Ringrose Atkins, and was born at Firville, near Mallow. He was apprenticed to his uncle by marriage, the Limerick-based architect George Richard Pain, and exhibited at the Cork Society for Promoting the Fine Arts and the Royal Hibernian Academy.

In 1845, Atkins married his cousin Louisa Gelston (1812-1904), and two years later he inherited half the estate of his maternal grandfather William Atkins at Fountainville, near Mallow.

Between 1845 and 1869, Atkins entered at least 13 architectural competitions, and attained first place in five of them, including Cork Town Hall and Killarney Railway Hotel, both in 1852. In the late 1860s, he designed several new Church of Ireland churches in the Munster area for the Ecclesiastical Commissioners.

His other works include the chapel at Mount Jerome Cemetery in Dublin, Saint Columba’s College, Rathfarnham, and Saint Mary’s Church, Killarney. He died on 5 January 1887.

Joseph Fogerty (1806-1887), who built the Leamy Schools, was a Limerick-born architect and builder, who was baptised in Saint Mary’s Cathedral, Limerick. His other works in Limerick include Trinity Episcopal Church in Catherine Street, and the Theatre Royal in Henry Street.

Meanwhile, the Leamy Free Schools opened in 1844, but soon faced difficulties. It was well supported by the Protestant pupils, but rarely had more than 20 Catholic pupils, and the school close in 1865 for a number of years.

The school had reopened by 1874. But in 1887, the Roman Catholic Bishop of Limerick, Edward Thomas O’Dwyer, forbade Catholic children from attending the school. Bishop O’Dwyer said that although Leamy may have died a Catholic, schools should be denominational rather than non-denominational, and most of the poor uneducated were Catholics. He said: ‘I will never allow the Catholics of Limerick, while I am bishop, to attend a mixed school.’

The dispute was resolved in 1894, when a new scheme for the school was drawn up. According to this, the Protestant community of Limerick received a quarter of the assets of the school, and the remainder, including the property, was vested in the Catholic community. The Department of Education now administers the Leamy Endowment.

A Limerick Civic Trust green plaque reads: ‘Leamy School. This school was built in 1843 out of the proceeds of a trust set up by William Leamy. In 1814 he bequeathed £13,300 for the education of poor children in Ireland. The school closed in 1952.’ 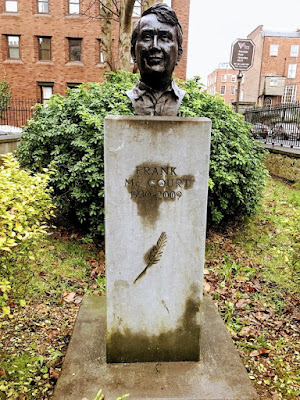 The bust of Frank McCourt was commissioned by Una Heaton, who established the Frank McCourt Museum (Photograph: Patrick Comerford, 2017)

The school closed in 1952 and three years later the premises were bought by the Crescent Clothing Company which manufactured men’s clothing until 1993.

The late Jack Heaton later bought the building, and Una Heaton opened an art gallery here in 2009. That year, she commissioned that bust of Frank McCourt that stands at the entrance and she began transforming the middle floor into the Frank McCourt Museum.

Since it opened in 2009, almost 100,000 people have visited the museum, where a portion of the author’s ashes have been placed in a box overlooking his former classroom.

Following an unsuccessful business investment in which the building was used as collateral, it was put on the market on the instructions of a bank. In 2014, it was put up for sale through Murphy Gubbins Auctioneers for €325,000. It was for sale again last year at an Allsop auction in Dublin at a reduced guide price of €140,000-€180,000.

The Limerick Post reported [7 April 2016] that Leamy House was being sold by Allsops, the auctioneers who deal with distressed properties. But Leamy House was withdrawn before it was due to be auctioned. Allsops said it was removed from auction because all the relevant documents were not submitted in time to allow potential buyers to inspect it ahead of the sale.

A spokesperson for Limerick City and County Council said the council had considered buying the building in the past but decided against it ‘for structural reasons.’ It was said the building provided an annual rental income of €23,500 from its four tenants, including an annual rent of €100 from the museum on an ‘informal tenancy.’

At the time, Una Heaton was reported to be making efforts to buy the building and said she was determined to keep the museum open, although she accepted its future was uncertain.

Later reports said it had been bought by a well-known Limerick businessman and that the future of Frank McCourt Museum is secure. Another tenant, tailor Joe Clancy, also remains in the building. Una Heaton told the media: ‘I am absolutely delighted. I am just over the moon. The phoenix is rising from the ashes.’

Posted by Patrick Comerford at 09:30 6 comments: 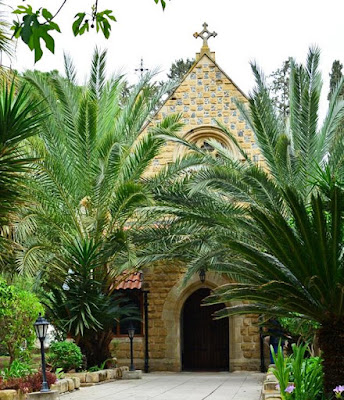 Saint Paul’s Cathedral, Nicosia … ‘Give thanks for the determination of disciples in the Diocese of Cyprus and the Gulf to seek peace and reconciliation and, where necessary, tackle injustice’

This week, from Sunday (19 March) until next Saturday (25 March), the USPG Lent Prayer Diary is following the topic ‘Living with Difference.’ The topic was introduced yesterday in an article in the Prayer Diary by the Right Revd Michael Lewis, Bishop of Cyprus and the Gulf, who was a speaker at the USPG conference in High Leigh in 2014.

I continue to remember with fondness and affection how, after a working visit to Cyprus in Easter 2000, the congregation of Saint Paul’s Cathedral, Nicosia, named me in their prayers on the morning of my ordination.

Give thanks for the determination of disciples in the Diocese of Cyprus and the Gulf to seek peace and reconciliation and, where necessary, tackle injustice.