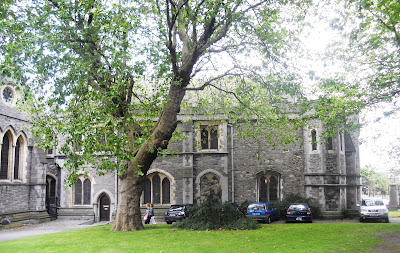 The sunshine returned today, even if it came back without summer temperatures. There is a clear blue sky over South Dublin this evening, and it was a beautiful morning in Christ Church Cathedral, with both a baptism and a special setting for the Cathedral Eucharist.

The cathedral choir is on holiday, but it was so appropriate that we had four voices, brought together as the Dublinia Consort, to sing William Byrd’s Mass for Four Voices.

The complete Mass, written by William Byrd (1540-1623) around 1592, is partly modelled on John Taverner’s Mean Mass, a highly regarded early Tudor setting. It has five movements, and this morning we heard four: the Kyrie, Gloria, Sanctus and Benedictus and Agnus Dei.

It is one of the three masses written by Byrd – the other two are for three and five voices. Although composed by Byrd for Roman Catholic liturgical use, this Mass was also performed in Queen Elizabeth I’s private chapel.

Carol Casey, a diocesan lay minister, preached, the Revd Garth Bunting was the celebrant, and I acted as deacon, reading the Gospel and assisting at the baptism of Kate (Katherine Anne Berman) Carswell.

To hear Byrd and Vaughan Williams and to sing one of George Herbert’s poems was heavenly this morning. But to take part in the baptism of a small child is more encouraging and delightful than the return of any summer sunshine ... it is a reminder of God’s over-generous and abundant outpouring of bounteous love, available to all and for all without discrimination.

I spent the afternoon in the back garden reading in the sunshine and listening to the gentle, soothing sound of water spouting from a Lion’s Head Fountain, given lovingly as a present five years ago when I was made a canon of the cathedral ... a reminder of happy summer days in Crete, and another reminder of the over-generous and abundant outpouring of God’s bounteous love. 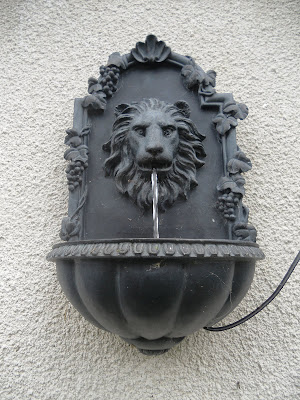 A reminder of happy summer days in Crete ... and a reminder of the over-generous and abundant outpouring of God’s bounteous love (Photograph: Patrick Comerford, 2012)

Posted by Patrick Comerford at 19:04 No comments: