A weekend on the shores of
Lough Ramor near Virginia

It was a pleasure to see my photograph of the Blessington Lakes being used by Ryan Turbidy in a quiz on the Late Late Show last night ... even if it was in connection with the launch of a new boy band being promoted by Louis Walsh.

The photograph was taken four years ago. This weekend, I am by another lake, staying for the weekend with friends at the Lakeside Manor Hotel on the shores of Lough Ramor, on the outskirts of Virginia, Co Cavan, close to the borders of Co Meath and Co Cavan. 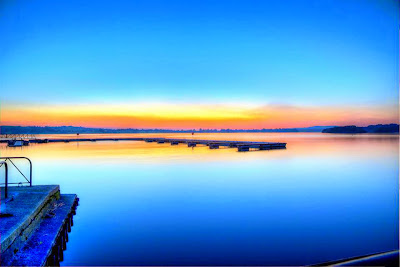 Lough Ramor is five miles long and two miles wide, and has a surface area of 800 hectares. The lake is fed by the Murmod river, which rises near Bailieborough and flows under the bridge beside Virginia, and is drained by the River Blackwater. It is quite shallow at its southern end but depths in excess of 15 metres have been recorded around the northern end of the lake.

The lake is referred to as Loch Muinreamhair in early in Irish history, and the Martyrology of Donegal, dating from the 5th century perhaps, refers on 6 February to the festival of Saint Brandubh and Saint Coluim of “Loch Muinreamhair.”

In the early 1800s, a beautiful brooch, now known as the Virginia Brooch, was discovered along the shores of Lough Ramor. It is said to have been a Viking brooch, and dates from 850 to 1000. It belongs to the same period as the high crosses in Kells and the Book of Kells.

In 1826, Thomas Tayor, 1st Marquess of Headfort and 2nd Earl of Bective, claimed the rights and royalties of the lake, the islands and its water. The Taylour or Headfort family built a shooting lodge in Virginia which is now the Park Hotel, and I have fond memories of staying there in my teens in 1967, learning to row on the lake.

Lough Ramor has huge stocks of coarse fish. This is an excellent coarse fishery and it regularly produces large catches of bream, roach, roach-bream hybrids and some perch.

The lake has 30 to 40 islands, some of them inhabited in the past. The islands have interesting names such as Great Island, Crane Island, Scabby Island, Sloo Island Woodward or Tighe’s Island, George’s Islands, Corronagh Islands, Porter’s Islands, Crossafehin Islands and Stoney Islands.

Hopefully, there will be time to enjoy the lakes of Co Cavan and some of the islands, and perhaps even spend a little time on a boat on the water, without being too entusiastic about long-forgotten rowing skills.

The Visitation of the Virgin Mary to Saint Elizabeth … a panel from the triptych in the Lady Chapel in Lichfield Cathedral (Photograph: Patrick Comerford)
Patrick Comerford

On Thursday evening [29 May 2014], I was in Christ Church Cathedral, Dublin, for the Cathedral Eucharist, celebrating the Ascension. On Sunday week [8 June 2014], I am celebrating the Eucharist in Saint Michan’s Church in the city centre and All Saints’ Church, Grangegorman, marking the Day of Pentecost.

In the meantime, what happens to the Disciples in Jerusalem?

In the reading from the Acts of the Apostle on Thursday [Acts 1: 1-11], two angels in white robes ask the disciples after the Ascension why they are standing around looking up into heaven.

In the Gospel reading [Luke 24: 44-53], they return to “Jerusalem with great joy,” and seem to spend the following days in the Temple. As the story unfolds in the Acts of the Apostles, the disciples, as well as Mary and other women (see verse 14), spend their time in prayer, choosing a successor to Judas, and praying, as we read in the Revised Common Lectionary [Acts 1: 6-14] tomorrow [1 June 2014, the Seventh Sunday of Easter].

Then, ten days after, they are filled with Holy Spirit, who comes as a gift not only to the 12 but to all who are gathered with them, including Mary and the other women, the brothers of Jesus (verse 14), and other followers in Jerusalem – in all, about 120 people (see verse 15).

But for these few days we are in that in-between time, between the Ascension and Pentecost. It is still the season of Easter, which lasts for 50 days from Easter Day until the Day of Pentecost.

So, it may seem a little out of sequence that in the Calendar of the Church, today [31 May] is the Feast of the Visitation of the Blessed Virgin Mary (see Luke 1: 39-56).

In 1389 Pope Urban VI, it would help to end the Great Western Schism, placed this feast in the Calendar of the Western Church on 2 July, the day after the end of the octave following the feast (24 June) of the birth of Saint John the Baptist, who was still in the womb of his mother, Saint Elizabeth, womb at the time of the Visitation.

In 1969, Pope Paul VI moved it to 31 May, a date that might continue to seem out of sequence but for the fact that it falls between the Feast of the Annunciation (25 March) and that of the Birth of Saint John the Baptist (24 June).

In the Eastern Orthodox Church, the celebration of a feast day marking the Visitation is of relatively recent origin, dating only from the 19th century. The Gorneye Convent in Jerusalem, built on the traditional site of the Visitation, celebrates this Feast on 30 March, but the Feast has not yet been accepted by all Orthodox jurisdictions.

In recent months, I have written for both the Lichfield Gazette and for the Annual Report of the Friends of Lichfield Cathedral about the triptych in the Lady Chapel, which includes a beautiful 19th century interpretation of the Visitation.

This carved wooden reredos or altarpiece dates from 1895. The high relief scenes, carved in from Oberammergau, the Bavarian town that is better known for its Passion Play, were designed in England by the Tractarian artist Charles Eamer Kempe (1837-1907), best known in the late Victorian period for his stained-glass windows.

Despite changing fashions and much pressure to explore abstract art, she has always remained a figurative painter. Her biblical scenes are cast in modern contexts: Christ visits a school in Sheffield; Lazarus is raised from the dead in an alcove in a wall borrowed from Chatsworth House; Jairus’s daughter wakes up upstairs in a modern home, surrounded by modern neighbours as an abandoned teddy-bear on a chair in by the window watches on in amazement; the infant Christ presented in the Temple is looking right at the viewer; in the case of the Woman taken in Adultery, Christ’s finger writing in the dust points out of the canvas and at the viewer.

Her paintings constantly engage the viewer, but show intimacy too. At the ‘Supper at Emmaus,’ Christ sits at the head of a table, with two disciples whose hands reach out towards his. He is holding a loaf of bread; wine and glasses stand ready. His pose recalls Stanley Spencer’s 1939 painting of a lonely Christ in the Wilderness, cradling in his hands a scorpion.


An icon of the Visitation by the Romanian icon writer Mihia Cocu in the Lady Chapel in Christ Church Cathedral, Dublin (Photograph: Patrick Comerford, 2014)
Readings: