‘He has … lifted up the lowly; he
has filled the hungry with good things’

Sunset on the harbour in Rethymnon (Photograph: Patrick Comerford, 2015; click on photograph for larger image)

At first, I was feeling a little isolated.

Platanes is a pleasant, bustling suburban village, 5 km east of Rethymnon. The beach is less than 10 minutes’ walk away, there is a wide variety of shops, bakeries, restaurants and bars, and I have gone swimming in the sea each day, so it is an ideal beach resort on the north-west coast of Crete.

But I wondered about the journey on the No 20 bus into Rethymnon at first. The buses run every half hour, it takes 20-30 minutes, it seems to stop at every hotel along the way – it is known locally as the Hotels Bus – and with temperatures in high 30s every day, the bus heaving a heaving, twisting, mass of humanity.

But that, as they say, really is a First World problem.

After a relaxing day, much of it by the sea, I headed into Rethymnon yesterday evening, and attended Vespers in the Church of the Four Martyrs, which stands in a busy square of the same name, Tessaron Martiron.

Today [8 September] in the Church Calendar is the Feast of the Birth of the Blessed Virgin Mary, and in the Orthodox Church a feast day begins with Vespers the evening before.

This is a fashionable church and one of the largest churches in Rethymnon, immediately outside the old town, at the Porta Guora Gate.

Inside the town, the first place to stop was one few tourists know, and where the only foreign visitors are migrants or people whose papers are not in order.

Each evening, there are long queues outside the clinic on Kastrinogianni Street which serves local people who have lost everything, including their dignity. During the day, this is a crèche; in the evening, after the working day, it is a voluntary clinic.

The doctors, nurses and hospital workers who offer this free clinic at the end of their working day say this is not charity, because everyone is entitled to proper health care as a human right. They ask no questions, and they undertake to intervene with hospitals if further care is needed.

Some years ago, in outburst on Mega TV, then then Health Minister made his views clear on Mega TV when he told protesting health workers: “We should have fired you so you can understand what is really happening.” Later he admitted his outburst was “excessive.” But it is probably health sector workers, like those who keep this clinic open each evening, who truly see and hear what is really happening in Greece today.

It is a cause worth supporting, and my First World problems of travelling on a bus packed with tourists fade away immediately when I see the work of this clinic. 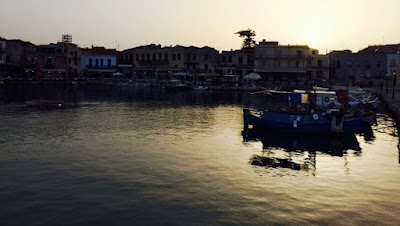 Walking around the harbour in Rethymnon at sunset (Photograph: Patrick Comerford, 2015)

As the sun was setting, I went for a walk around the old harbour in Rethymnon, and even there the coastguard float was a reminder that in Crete I am isolated from the humanitarian crisis that continues on other Greek islands to the east, including Lesbos, Samos, Kos and Rhodes.

During my stroll through the old town, I stopped to buy a CD of The Ballad of Mauthausen, a cantata written by Iakovos Kambanellis and Mikis Theodorakis 50 years ago in 1965, 20 years after the end of World War II. Two weeks ago, I found the words and lyrics of this cantata, and the voice of Maria Farantouri, going round and round in my head, day and night, as the impact of the Syrian refugee crisis exploded in the Western media. 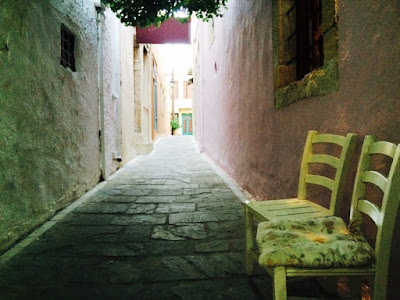 A side street in the old town in Rethymnon (Photograph: Patrick Comerford, 2015)

Two of us later had dinner in Kyria Maria, in a side street close to the Rimondi fountain, and continued to stroll through the narrow streets of the old town before catching the “Hotels Bus” back to Platanes.

The Gospel reading this morning (Luke 1: 46-55) is the canticle Magnificat, which is a challenge to all political thinking about the present crises wherever we live: 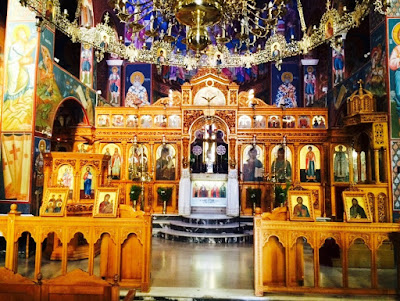 Inside the Church of the Four Martyrs in Rethymnon (Photograph: Patrick Comerford, 2015)

Almighty God,
who looked upon the lowliness of the blessed Virgin Mary
and chose her to be the mother of your only Son:
Grant that we who are redeemed by his blood
may share with her in the glory of your eternal kingdom;
through Jesus Christ our Lord.

Posted by Patrick Comerford at 06:48 No comments: