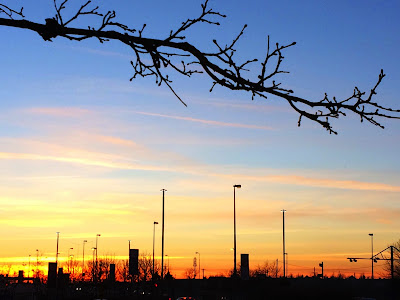 ‘Dust in sunlight and memory in corners’ … sunset at Clare Hall this evening (Photograph: Patrick Comerford, 2014)

The Sunday after Easter is sometimes called ‘Low Sunday’ for a variety of reasons –ranging from the spiritual anti-climax some feel after the great celebration of Easter, to the fact that the high attendances on Easter Day do not carry through to the following Sunday.

For some people, this Sunday after Christmas is another ‘low’ Sunday. But the attendance figures seemed to be good in Christ Church Cathedral for the Cathedral Eucharist this morning [28 December 2014]. I was the deacon, reading the Gospel and assisting with at the administration of the Holy Communion.

The Dean of Christ Church, the Very Revd Dermot Dunne, presided, and the preacher was the Revd Cecilia Grace Kenny, who spoke about the prophecy of Simeon and Anna when the Christ Child was presented in the Temple in Jerusalem by the Virgin Mary and Saint Joseph (see Luke 2: 22-40).

Next Sunday [4 January 2015] marks the fiftieth anniversary of the death of the poet TS Eliot on 4 January 1965, and I was reminded this morning of his poem ‘A Song for Simeon,’ which is based on this Gospel passage and the canticle Nunc Dimittis.

This is one of four poems by TS Eliot published between 1927 and 1930 and known as the Ariel Poems. In ‘Journey of The Magi’ and ‘A Song for Simeon,’ Eliot shows how he persisted on his spiritual pilgrimage. He was baptised and confirmed in the Church of England on 29 June 1927; ‘Journey of the Magi’ was published two months later, in August 1927, and a few months later Faber, for whom he worked, published ‘A Song for Simeon’ as part of a series of Christmas booklets. In all, Eliot wrote four poems for the series.

Both ‘Journey of The Magi’ and ‘A Song for Simeon’ draw on the stories of Biblical characters concerned with the arrival of the Christ Child. Both poems deal with the past, with a significant Epiphany event, with the future – as seen from the time of that event, and with a time beyond time – death.

‘A Song for Simeon,’ as with ‘Journey of The Magi,’ is also in the mouth of an old man, the Prophet Simeon in the Temple in Jerusalem. Here too, Eliot draws on a Christmas sermon by Lancelot Andrewes: “Verbum infans, the Word without a word, the eternal Word not able to speak a word.” In Eliot’s words, the old man sees a faith that he cannot inhabit in “the still unspeaking and unspoken Word.”

I hope to speak about Eliot again next Sunday when I preach in Zion Church, Rathgar, on the fiftieth anniversary of his death.

After coffee in the Cathedral Crypt following this morning’s Eucharist, three of us went for lunch in La Dolce Vita in Cow Lane, in the Temple Bar area near the cathedral.

This was my first time to meet my cousin Stephen Comerford – his late father, also Stephen Comerford, was my second cousin. There were family stories to recall, reminiscences to share, and memories to exchange as we recalled Comerford families in Wexford and Dublin, the family links with Comberford, Lichfield and Bunclody, and competed to see who could remember the most Jewish shops in the Clanbrassil Street area.

It was like we had moved from Simeon and Anna in the Temple in Jerusalem to the Erlichs and Rubensteins in Little Jerusalem. 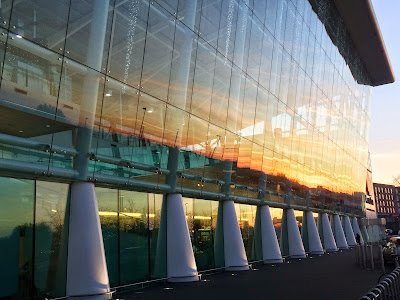 ‘The winter sun creeps by the snow hills’ … the setting sun reflected on the glass walls of the shopping centre at Clare Hall (Photograph: Patrick Comerford, 2014)

Later, two of us went on for a Christmas visit to other family members. On the way back, as we stopped briefly at Clare Hall, we could see in the east the snow-filled clouds that are hovering the Irish Sea but not moving into the coast.

To the west, the sun was setting and casting long rays onto the high glass walls of the shopping centre and the surrounding buildings. There was such a clear sky, and colours were so sharp it might have been possible to imagine that this was a summer evening in Greece. And I recalled those lines by TS Eliot in ‘A Song for Simeon’:

The winter sun creeps by the snow hills;
…
My life is light …
Dust in sunlight and memory in corners 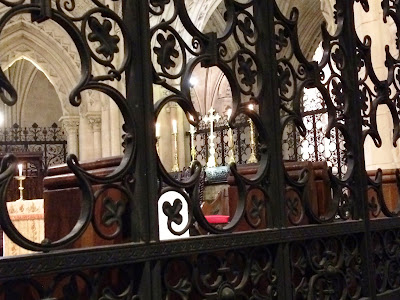 Posted by Patrick Comerford at 19:46 No comments: 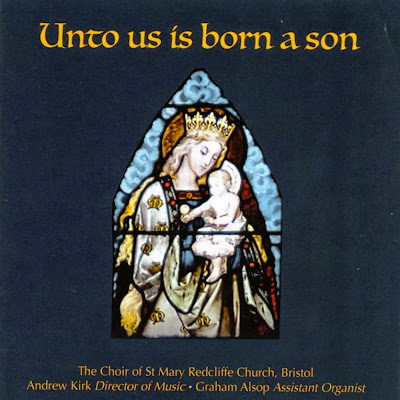 As part of my spiritual reflections for this Christmas season, I am thinking about an appropriate carol or hymn each morning. Today, in the Calendar of the Church, this is the First Sunday of Christmas, but on 28 December we also remember the Holy Innocents. So, this morning [28 December 2014] I have chosen ‘Unto us is born a Son’, translated by George R Woodward (1848-1934), which is No 184 in the Irish Church Hymnal. Indeed a note in the New English Hymnal says: “Suitable also for Holy Innocent’s Day.”

This hymn, which is the Processional Hymn at the Cathedral Eucharist in Christ Church Cathedral, Dublin, this morning [28 December 2014] and which Choir sang at the Service of Nine Lessons and Carols in Christ Church Cathedral, Dublin, last Monday evening [22 December 2014], is based on Puer nobis nascitur, a mediaeval Christmas carol found in a number of manuscript sources, including the 14th century German Moosburg Gradual in the Augustinian College of Saint Castulus in Moosburg around 1360, and a 15th century manuscript in Trier.

The Moosburg Gradual contains a number of melodies derived from the 12th and 13th century organum repertories of Notre Dame de Paris and the Abbey of Saint Martial, Limoges, so the original hymn may be even older.

The song was first published in 1582 in the Finnish song book Piae Cantiones, a volume of 74 mediaeval songs with Latin texts collected by Jaakko Suomalainen, a Finnish Lutheran priest.

The book became well known in England after a rare original copy of Piae Cantiones owned by Peter of Nyland was given as a gift to the British Ambassador in Stockholm. When he returned to England, he gave this book to the Revd John Mason Neale in 1852. It was from this copy that Neale, in collaboration with the Revd Thomas Helmore published songs in two collections in 1853 and 1854, although this carol was not included in either.

The carol became popular as a processional hymn following a translation by the Revd George Ratcliffe Woodward (1859-1934) first published in the Cowley Carol Book in 1902.

Canon Percy Dearmer (1867-1936) also translated the hymn for the 1928 Oxford Book of Carols as ‘Unto Us a Boy is Born.’ Both translations are commonly used.

Robert Cummings of the All Music Guide notes: “Its text speaks of the birth of Christ and of his mission on Earth. The melody is glorious in its triumphant character and ecstatic devotional sense ... a radiant hymn of strong appeal, brighter and more colourful than most of the chants emerging from and before the fourteenth century.”

Cummings goes on to suggest that the first phrase and indeed the whole melody resembles the much later hymn ‘O God, Our Help in Ages Past.’

Unto us is born a son, translation by George Ratcliffe Woodward:

Unto us is born a son,
King of choirs supernal:
See on earth his life begun,
Of lords the Lord eternal.

Christ, from heav’n descending low,
Comes on earth a stranger;
Ox and ass their Owner know
Now cradled in a manger.

This did Herod sore affray,
And did him bewilder,
So he gave the word to slay,
And slew the little childer.

Of his love and mercy mild
Hear the Christmas story:
O that Mary’s gentle Child
Might lead us up to glory!

O and A and A and O,
Cantemus in choro,
Voice and organ, sing we so,
Benedicamus Domino.

Unto Us a Boy is Born, English translation by Percy Dearmer (New English Hymnal, No 39)

Unto us a boy is born!
King of all creation,
Came he to world forlorn,
The Lord of every nation.

Cradled in a stall was he
’Midst the cows and asses;
But the very beasts could see
That he all men surpasses.

‘A prince,’ he said, ‘in Jewry!’
All the little boys he killed
At Bethlem in his fury.

Now may Mary’s Son, who came
So long ago to love us,
Lead us all with hearts aflame
Unto the joys above us.

Omega and Alpha he!
Let the organ thunder,
While the choir with peals of glee
Rends the air asunder.