Hidden gestures of solidarity in
Crete that move beyond charity 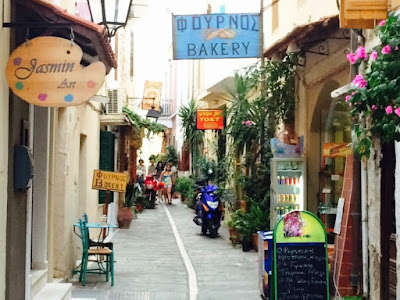 Do tourists in the old town of Rethymnon know the crises Greece is going through this year? (Photograph: Patrick Comerford, 2015)

The casual tourist strolling through the cobbled streets and squares of the old Venetian town of Rethymnon would be forgiven for not realising that Greece is going through a difficult election campaign and a severe economic crisis or that many Greek islands are finding it impossible to cope with the arrival of refugees in large numbers.

In the midst of the evening bustle, a few young adults were handing out leaflets for a far-left organisation. But they knew it was waste of time handing them to middle-age tourists – how could they read or understand them anyway?

Two policemen on motorbikes tell casual street traders to move on, the northern coast of Crete is too far from the Turkish coast for any refugees to arrive here in great number, and so there is no sign of one of the most difficult humanitarian crises that Greece has experienced since the end of the civil war in 1949.

The tourism sector contributes over 20% to the GDP of Greece, covers 60% of the country’s trade balance deficit, employs one in five people, and generates €40 billion for the Greek economy. But these figures are higher in islands such as Crete that are heavily dependent on tourism.

Despite images on television and in newspapers of the crises in Greece, more than 5 million tourists are expected to arrive in Greece this month and next month, and another million in November and December.

The economy of Rethymnon depends heavily on tourism in summer and on its standing as a university town in the winter. Walking around the old town last night [10 September 2015], I could see where some shops have closed and other shops and restaurants seem to be doing less business, but it is difficult to assess whether the images of Greece in northern Europe have had any direct impact this year on the tourism sector in Crete. 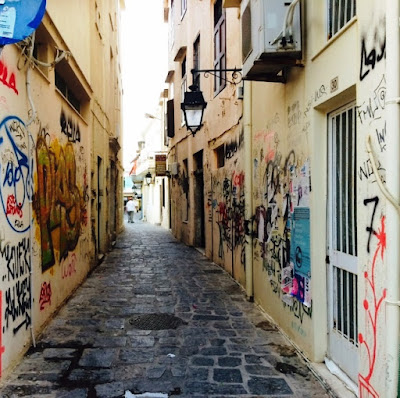 In the back streets, away from the gaze of tourists, other lives face difficulties (Photograph: Patrick Comerford, 2015)

But in the back streets, away from the gaze of tourists, there is one particular place trying to make a difference and bring about change.

The Voluntary Welfare Clinic Rethymno (Εθελοντικό Ιατρείο Κοινωνικής Αλληλεγγύης Ρεθύμνου) works from a storefront crèche in Kastrinogiannaki Street, hidden in a dark street where there are no tourist shops, yet only a few steps away from the cathedral.

The doctors, dentists, nurses, pharmacists and other volunteers who run this clinic are not part of any government-funded programme, and believe in a free public system.

We had called in on Monday evening when we saw some of the work of the clinic. But it is hard-pressed, the workload is heavy, and the numbers needing attention must be growing.

Last night the clinic was closed, but the hairdresser across the street told us we could make a donation at the pharmacist’s shop, Kounoupas Pahrmacy, on the corner of Manioudaki Street, facing the Cathedral.

The response was overwhelming in warmth and unexpected. But we also learned about a business with an ethical approach that seems unique.

Yannis Kounoupas founded this pharmacy in 1908, and continues with his values over a century later, having passed down through four or five generations of the Kounoupas-Kardiakidou family.

Their centenary brochure says: “A pharmacy’s purpose is to serve patients, not to make the pharmacist rich … We should treat everyone with an open heart … If the patient cannot afford the medicines, the pharmacist must always find a way for him to obtain them. A pharmacist should treat the pharmacy’s staff as if they were their own children and participate in all of the pharmacy’s chores, for there is no work to be ashamed of as long as it is honest.”

Prayers of thanks in the Cathedral in Rethymnon (Photograph: Patrick Comerford, 2015)

Down on the next corner, in a small cobbled square opposite the place in Arkadiou Street where we had found rooms to rent three or four years in a row in the late 1980s and early 1990s, a brass band was playing, and life was continuing as normal.

We paused for a short time of prayer in the cathedral, giving thanks for those who try to help those who are suffering reach out towards a normal life, and who do so without expectation of reward or acknowledgement.

We had dinner in Akri, a garden taverna that is almost hidden in a corner of the old town at Souliou Street and Kornarou Street and one that has been an old favourite for decades.

And there was some tourist shopping to complete before catching a late night bus back through the suburbs of Rethymnon to Platanes for a nightcap at Julia Apartments. 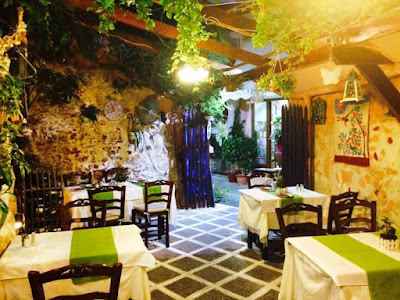 Dinner in Akri in a hidden corner of the old town in Rethymnon (Photograph: Patrick Comerford, 2015)

Life goes on … a brass band in a small square between the Cathedral and Arkadiou Street in Rethymnon last night (Photograph: Patrick Comerford, 2015)

Posted by Patrick Comerford at 06:29 No comments: