Lion or lamb? Or an Aegean postcard? 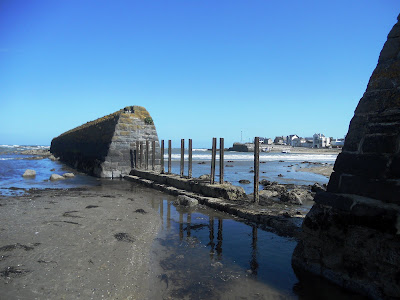 Blue skies and blue waters seen through the sea defences at the harbour in Rush this afternoon (Photograph: Patrick Comerford, 2012)

Despite the forecasts of rain, and despite the continuing north-easterly winds, and despite low temperatures hovering around 11 or 12, it looked like a sunny afternoon today, with clear blue skies and strong sunshine.

My sermon for tomorrow morning has long been prepared, and I’m looking forward to the Sung Eucharist in Saint Bartholomew’s Church. This afternoon was one that it would have been a shame not to rejoice in, one that had to be rejoiced in. And so I went out to Fingal for a stroll along the harbour front in Rush and a walk along the North Strand. 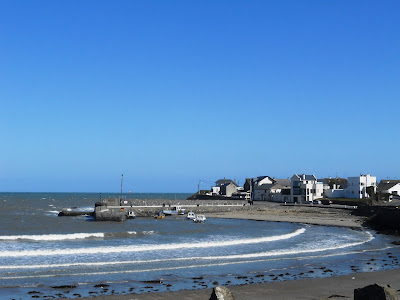 In the small harbour, all the fishing boats were tied up, three small boys were playing ball on the small portion of sand, and the waves were swelling and rising, battering against the harbour walls and the sea defences.

Two lone kite surfers were out on the choppy waves, enjoying the surf, the sun and the inflowing tides.

The square-shaped, cubist-like, bright coloured houses along the rim of the harbour stood out in relief against the blue skies like an Aegean postcard.

We walked around the rim of the harbour beach and down unto the north beach, where the waves were still battering the shoreline, scattered with mussel and sea shells. 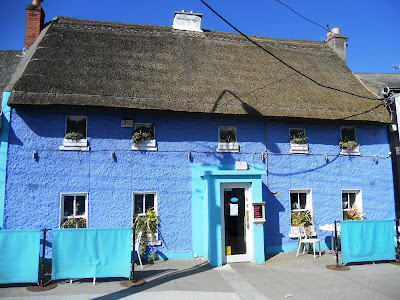 The Thatch ... said to be the oldest two-storey thatched cottage in this part of Fingal (Photograph: Patrick Comerford, 2012)
We walked back into Rush and had a late lunch in The Thatch, a coffee house, wine bar and restaurant on Lower Main Street.

But this is no ordinary coffee house. This is one of the oldest thatched, two-storey thatched cottages in Fingal. It dates back to the mid-18th century, and is said to have been the home of ‘Jack the Bachelor,’ a smuggler who took advantage of the coves and coves around this part of north Co Dublin.

The decor is engaging, to say the least, and the character is matched by the welcome, the menu and the quality of the food. 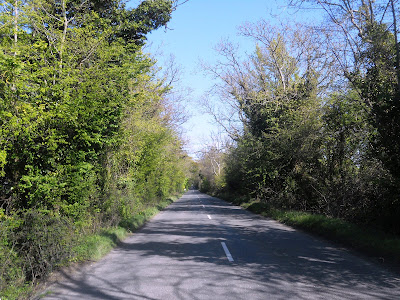 Trees forming an arch at Turvey on the road to Donabate this afternoon (Photograph: Patrick Comerford, 2012)

I thought of going back to see if there was a game at Rush Cricket Club, opposite Kenure Church. But instead we made our back through Lusk and Rogerstown to Turvey Avenue, which was lined with trees whose spring-green boughs formed an arch across the road leading to Donabate.

We spent an hour or two in Portrane, and as we left the clouds were covering the once-blue skies and the waves were chopping in against the beach at the Burrow.
It is often said that March comes in like a lion and goes out like a lamb. In Wales this proverb is applied to the month of April more often than March. But throughout this month it has felt that April came in like a lamb and is going out like a lion. But, despite all the predictions, these last few days in the countryside and on the beaches of Dublin and Wicklow have stirred my heart and lifted my expectations for summer. 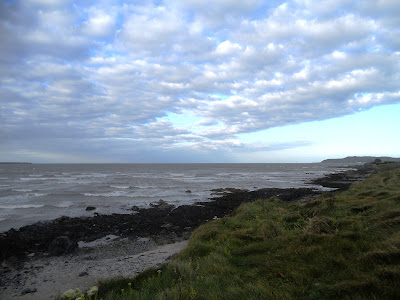 Fading lights at Portrane, looking out to Lambay and the Irish Sea this evening (Photograph: Patrick Comerford)

Posted by Patrick Comerford at 23:58 No comments: