Montecatini Alto ... a charming town at the top of a hill 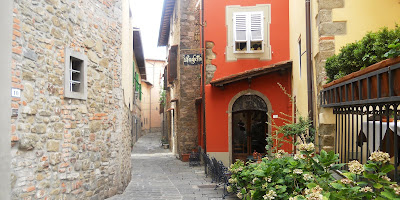 For the past week, as I toured the historic towns and vineyards of Tuscany, I was based in the Grand Hotel Plaza and Locanda Maggiore in Montecatini Terme, a spa town with a population of over 21,000 in the province of Pistoia, at the eastern end of Piana di Lucca.

Walking around the streets of Montecatini Terme this morning [4 September 2012], it appeared most of the tourists and holidaymakers here are Italian. This is this not so much a resort as the biggest spa-town in Italy, and one of the most popular destinations for thermal spa tourism, with the town’s 200 or so hotels selling over two million bed nights each year.

Apart from the spa and thermal baths, many visitors also find Montecatini the perfect base to visit neighbouring Lucca, Florence, Pisa and Siena. But the town has its own attractions too with golf, markets, theatres, restaurants and night clubs, concerts, art exhibitions, festivals, a production of Verdi’s La Traviata last week and a concert by Luciano Pavarotti this week. 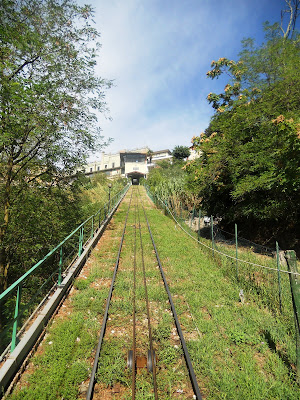 Montecatini is really two towns linked by the funicular Funicolare. The old hilltop town of Montecatini Valdinievole, now called Montecatini Alto (Upper Montecatini), has a population of only 700. It is built around an old castle, and was the seat of the local government until 1905. The newer, lower town of Montecatini Terme has modern buildings, spas and fine hotels dating from the belle époque.

In 1530, the first baths were established at the foot of Montecatini to take advantage of the spa waters, which were then known as “Medici” and “of blackbirds.” But by the 18th century the waters there had become stagnant. Grand Duke Leopold of Tuscany – later the Emperor Leopold I of Austria – initiated the cutting and digging of new water channels, land was reclaimed, and three baths were built to facilitate the use of the popular hot springs: Tettuccio (1779), Bagno Regio (1773) and the Terme Leopoldine (1775). 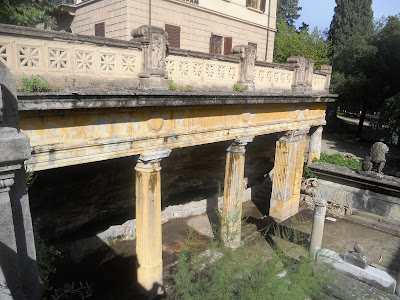 The thermal baths in the spa town became more famous than the castle and old town (Photograph: Patrick Comerford, 2012)

The thermal baths in the lower part of Montecatini soon became more famous and more important than the castle and old town up in Montecatini Alto. The resort hotels grew in number and quality, and the place soon developed fashionable restaurants, theatres, nightclubs and a casino.

The celebrities who came to Montecatini included the composers Verdi, Puccini and Rossini. In1905, what was once a small village at the foot of the hill became the City of Bagni di Montecatini. But the name was not popular and it was changed to Montecatini Terme in 1928.

After Sunday night’s heavy rainstorm, we took the ten-minute steep journey on the Funicolare up the hill to Montecatini Alto on Monday afternoon [3 September] for lunch and to walk around the old town.

People may have lived on this hill since Palaeolithic times, but the town was first fortified in 1016, and the castle is first mentioned in 1074. By then the town belonged to the Bishop of Lucca and the guilds of Maona and Montecatini.

By the end of the 12th century, Montecatini was an independent commune with its own constitution, and it allied itself with Lucca in wars with neighbouring Pistoia, and later in the wars against Florence.

Montecatini was seen as a strategic stronghold and it was captured in 1315 by Uguccione della Faggiuola, the ruler of Pisa and Lucca. But the walled town finally fell to Florence in 1330. In the 16th century, Montecatini fell prey once again to the feuds between Florence and Siena.

In 1554, the town was captured by Siena and Cornelio Bentivoglio declared himself a liberator. But the once-impregnable fortress of Montecatini had fallen into poor repair after centuries of battles. When Florence recaptured Montecatini, Cosimo de Medici ordered his troops to “destroy the foundations” of the town.

Over two days and two nights, 800 Florentine soldiers destroyed the walls, the towers and the houses of Montecatini as plundered the town mercilessly. They took away even the doors and windows, and after their onslaught, 160 houses, three convents, the Palace of the Podestà and the Palace of Justice were all that was left standing of a once great walled city.

The efforts to established baths at the foot of the hill were now forgotten and the stagnant waters of the abandoned spas made the area a health hazard.

But the development of the spa resort at the bottom of the hill brought new life to Montecatini Alto, and the town became a second home to the poet Giuseppe Giusti and was visited regularly by the celebrities who came to Montecatini Terme, including Giuseppe Verdi, who stayed at the villa built by Napoleone Melani, director of the Grand Hotel Locanda Maggiore, where he was staying.

During World War II, many Jewish children found shelter at an orphanage at the Villa Forini Lippi in Montecatini run by Father Julius Facibeni and a Catholic charity based in Florence. Father Facibeni was later named by Yad Vashem, the holocaust museum in Jerusalem, as one of the “Righteous among the Nations.” 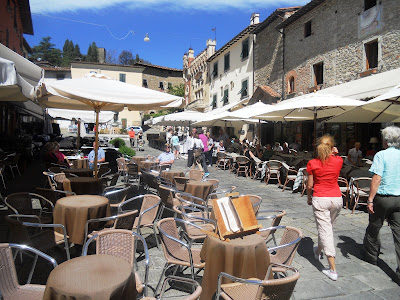 We began our stroll around Montecatini Alto in Piazza Giuseppe Giusti, the town’s main square, named after the poet. At street level, many of the buildings lining this charming square are restaurants, cafés and gift shop. But a closer look shows how many of these buildings are of historical and archaeological interest.

Between the tables of two restaurants is the Cappellina di Piazza, a small chapel hidden behind wrought iron gates on the ground floor of the Torre Colloresi, one of the town’s eight surviving historic towers – at one time there were 25. The chapel is now a memorial to the town’s war victims, including partisans who resisted fascism during World War II.

A little further up this side of the square is the Teatro dei Risorti, once the town assembly place and courthouse and now a restaurant and theatre.

The buildings on the opposite side of the square include another tower house – the Torre Signorelli o di Uggolino, named after a 14th century doctor who was one of the first to write scientific accounts of the healing properties of Italian spas.

We passed Giusti’s former home as we made our way on up to the hill with yet another tower, the Torre Resa Campanaria, that has become the bell tower of the parish church of Saint Peter. 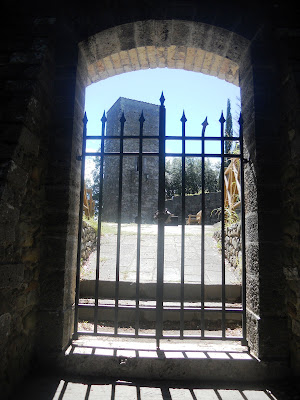 We stopped awhile in the church, with its shrine to Saint Barbara, and prayed in the side chapel reserved for private prayer, and then went on to see the walls of the Old Castle, which enclose yet another tower, Torre della Rocca.

Back down in the main square, lunch in Casa di Gala was particularly pleasant, and we watched village life pass us buy before going on to climb Castel Nuovo to look at the southern half of the town.

There we came across the Torre dei Lemmi, which has become a clocktower with an eccentric dial divided into six rather 12 hours, and large Roman lettering. Opposite it, the Carmelite monastery, the Church of Santi Jacopo e Filippo (Saint James and Saint Philip), built in the baroque style in 1764, and the Chapel of Saint Sebastian all seem to have been abandoned.

At the bottom of the hill, the views below us stretched beyond Montencatini Terme and across the plains of Tuscany. We had missed the Benedictine Convento di Santa Maria a Ripa and many other places of interest. We took the funicular back down the hill to Montecatini Terme and were back in Verdi’s Grand Hotel Plaza and Locanda Maggiore before the thunderstorm broke.

The view below spread beyond Montencatini Terme and across the plains of Tuscany (Photograph: Patrick Comerford, 2012)

Posted by Patrick Comerford at 23:26 2 comments: