Having a cracking good time
at Easter in Crete this year

Easter eggs outside a house in Panormos, east of Rethymnon (Photograph: Patrick Comerford, 2019)

Today is Easter Monday in Greece and was a public holiday throughout Greece, with family celebrations and meals continuing throughout the day. Dyed eggs can be seen everywhere, in baskets and on tables outside houses, shops and restaurants and as decorations in hotel lobbies and on bar counters.

One Easter tradition that every visitor to Greece notices is the tradition of dying red Easter eggs as a symbol of Orthodox Easter. Although it is also quite common to dye eggs in other colours, Greek Easter is rarely or almost never celebrated without red eggs.

The red eggs embody a number of traditions:

1, The deep red dye symbolises the blood of Christ shed at his Passion and Crucifixion.

3, Cracking the egg symbolises Christ’s resurrection from the dead.

Eggs are traditionally dyed red on Maundy or Holy Thursday, but this can be done on any day leading up to Sunday. They are the first food eaten after the strict fasting of Lent in some families, while others enjoy them after dinner when everyone is gathered around the table to play the game that involves cracking the eggs.

The first red egg that is dyed is considered to be the egg of the Virgin Mary and is saved in the home for protection against the evil eye until the next year when a new ‘first egg’ is dyed.

One tradition says Mary Magdalene was bringing cooked eggs to share with the other women at the tomb when the eggs in her basket miraculously turned brilliant red as she saw the risen Christ.

A different legend involves Mary Magdalene’s role in spreading the Gospel. According to this story, after the Ascension, she went to the Emperor of Rome and greeted him, saying ‘Christ is Risen!’ (Χριστός ἀνέστη!), which is still the traditional Greek greeting throughout the season of Easter. On hearing this, the Emperor pointed to an egg on his table and stated, ‘Christ has no more risen than that egg is red.’ Immediately the egg on his table turned blood red.

At big family feasts on Easter Day, family members crack their eggs together. One says Χριστός Ανέστη (Christos Anesti!, ‘Christ is risen!’), to which the other replies, Aληθώς Aνέστη (Alithos Anesti!, ‘He is risen indeed!’). 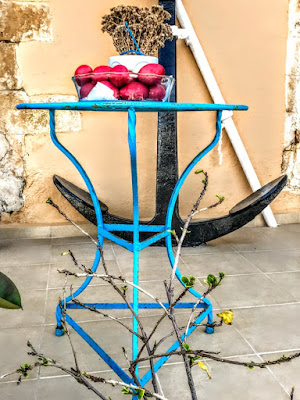 Eggs on a table in Panormos, east of Rethymnon (Photograph: Patrick Comerford, 2019)

The egg-cracking game or τσούγκρισμα (tsougrisma) is an integral part of Easter celebrations and the person with the strongest egg that is not cracked is said the be blessed with good luck for the rest of the year.

Eggs are traditionally dyed red on Maundy or Holy Thursday, but this can be done on any day leading up to Sunday. They are the first food eaten after the strict fasting of Lent in some families, while others enjoy them after dinner when everyone is gathered around the table to play the game.

The first red egg that is dyed is considered to be the egg of the Virgin Mary and is saved in the home for protection against the evil eye until the next year when a new ‘first egg’ is dyed.

Many shops sell packets of blood-red dye. Since Greek Easter eggs are not just for celebration purposes, but they are also meant to be eaten.

After the egg-cracking is over, not a bit of the eggs is wasted. They are peeled, cut, and served with salt and vinegar. Some families make a small tray with the eggs along with leftover cold lamb, and other small pieces to be served with red wine or ouzo to guests who visit today (Easter Monday) or later in this week after Easter. 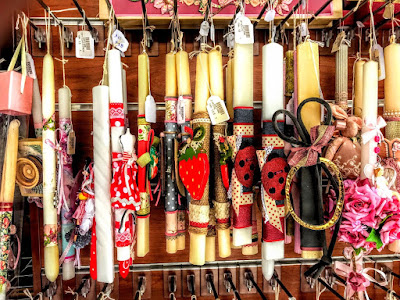 Easter candles in a shopfront in Rethymnon (Photograph: Patrick Comerford, 2019)

Other family traditions at Easter include:

3, Roasting Lamb: Families get together before noon on Easter Day to roast the lamb on a spit and join in a long lunch with lots of meat, potatoes, salads and drinks.

4, Magiritsa (Μαγειρίτσα): This dish contains the offal of the lamb just before it is roasted, along with some green vegetables (lettuce, dill and onion) boiled together. It symbolises the end of the 40-day fast in Lent.

The traditional Easter hymn still being sung throughout this week is:

Christ is risen from the dead,
Trampling down death by death,
And upon those in the tombs
Bestowing life! 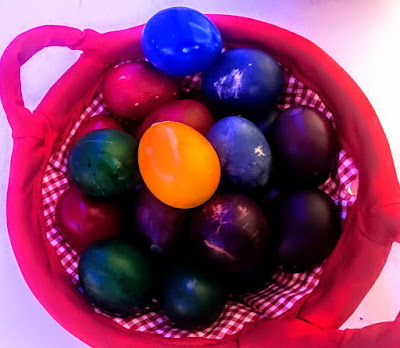 A decorative basket of multi-coloured dyed eggs in the hotel lobby at La Stella in Platanias, east of Rethymnon (Photograph: Patrick Comerford, 2019) 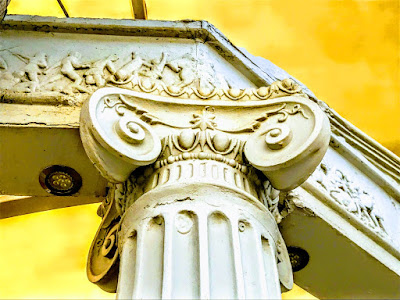 Ask most people about the Book of Revelation, and they will instantly respond with images of the ‘Four Horsemen of the Apocalypse’ and Armageddon. But – and I kid you not – on one recent visit to Athens I heard someone referring to the ‘four horsemen of the Acropolis.’

While I am in Crete this week, enjoying in the Greek Orthodox celebrations of Easter, I have also been putting the final touches to a posting of liturgical and preaching resources for Sunday week [12 May 2019] that also a discussion of the reading that Sunday in the Book of Revelation (Revelation 7: 9-17).

In my posting, I plan to refer also to the previous chapter, where Saint John the Divine has a vision in the cave on the island of Patmos that includes the ‘Four Horsemen of the Apocalypse’: 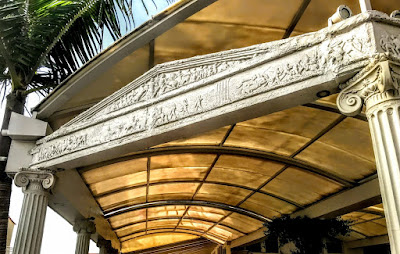 I may joke about the Four Horseman of the Acropolis, but in this part of Rethymnon, in the eastern suburban village and resort of Plantanias, there is a bar on the way to the beach here that is known as the Acropolis Bar.

Although the temperatures are now in the mid-20s each day, the Acropolis Bar in Platanias has not yet opened for the summer season, like many similar places in Platanias and the neighbouring hillside village of Tsesmes, east of Rethymnon in Crete.

But the decorative features outside the bar include many reproductions of the Parthenon frieze from the Acropolis in Athens, interspersed between classical columns.

Last week [25 April 2019], the Cambridge Union hosted a debate, ‘This House would return looted art back to its country of origin.’ Speaking for the motion were Alice Procter, tour guide and art historian, best known for running the often sold-out Uncomfortable Art Tours, telling the ‘ugly truth’ about the artefacts in Britain’s museums; Dame Janet Suzman, actor and director of both stage and screen and an Academy Award nominee, who currently co-chairs the British Committee for the Reunification of the Parthenon Marbles; and the archaeologist Professor Lord Renfrew, a former Master of Jesus College, Cambridge, and a former President of the Union.

Speaking against were Dr Tiffany Jenkins, author of Keeping Their Marbles; Dr Kevin Childs, writer and lecturer on art history; and Dr Neil Curtis, Head of Museums and Special Collections at the University of Aberdeen. 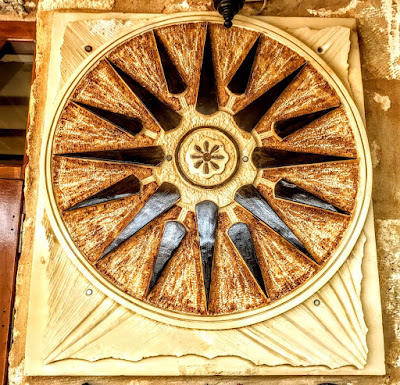 The Star of Vergina at the Vergina restaurant in Platanias (Photograph: Patrick Comerford, 2019)

Of course, there is difference between looted art and legitimately acquired treasures of the past.

But at the same time, the British Culture Secretary, Jeremy Wright, was ruling out returning objects held in national museums to their countries of origin. In an interview last week, he told The Times that if you ‘followed the logic of restitution to its logical conclusion,’ there would be no ‘single points where people can see multiple things.’

It is an absurd argument. Basically, it is only English museum visitors who matter – Greeks, and anyone else who comes to Athens to see the Acropolis, do not need to see ‘things’ and do not need a single point where they can see the Parthenon Marbles, in the very place they are supposed to be.

Nor does his argument deal with the way the marbles were barbarously hacked from the Parthenon frieze by Lord Elgin. 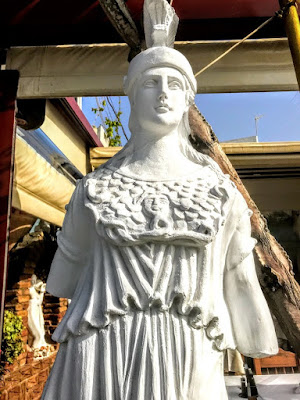 A statue of Athena at the Vergina restaurant in Platanias (Photograph: Patrick Comerford, 2019) (

Greeks take pride in their cultural and classical legacies, but at the same time can wear this pride very lightly.

Two of us have had lunch a few times this past week in Vergina, a restaurant in Platanias whose very name celebrates Alexander the Great and his father Philip II of Macedon.

Around the place are copies of classical statues, reproductions of Minoan images from Knossos, elements of Byzantine brickwork, and countless images of the 16-point Star of Vergina, from which the restaurant takes its name.

The Vergina Sun (Ήλιος της Βεργίνας) or Star of Vergina, a symbol in ancient Greek art in the 6th to 2nd centuries BC, became a popular symbol of Greek identity after archaeological excavations in Vergina in the late 1970s uncovered the tomb of Philip II of Macedon, father of Alexander the Great.

It is seen as the historical symbol of ancient Macedonia and became part of the controversy in the 1990s over the name and symbols adopted by the Former Yugoslav Republic of Macedonia (now North Macedonia).

An agreement signed with Greece last year [17 June 2018] includes both sides accepting the name North Macedonia and removing the Star of Vergina from public use in North Macedonia.

Symbols of the past are important for present-day Greek identity. Brexit is not going to put an end to demands for the return of the Parthenon Marbles to Greece. 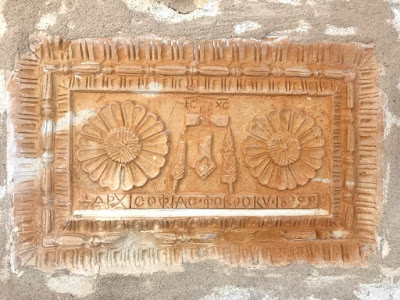