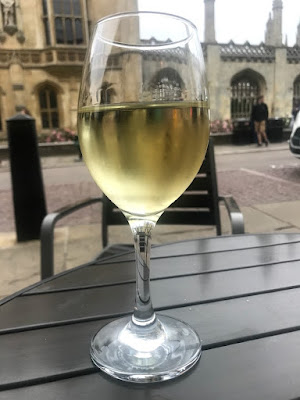 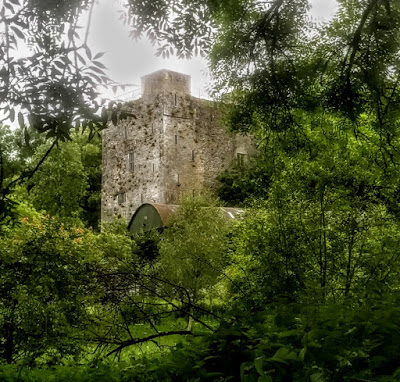 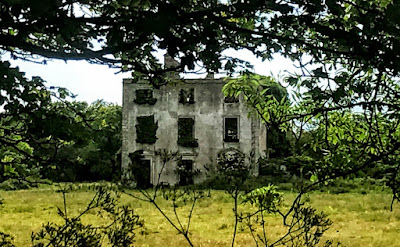 The ruins of The Grange … left to decay since the early 1940s (Photograph: Patrick Comerford, 2019)

On my way to Lough Gur in east Co Limerick recently, I passed in imposing ruins of The Grange, once an elegant country house in Co Limerick with interesting associations with the O’Grady, Croker and Dyer families.

The Grange, which has been in ruins for three-quarters of a century or more, was built sometime between the 1780s and the 1810s on the site of an earlier house.

It was described in 1786 as ‘the beautiful and well-improved seat of Standish O’Grady.’ But the present house, now in ruins, may be a later building.

Local lore says that the member of the O’Grady family who built this once-elegant house had inherited his fortune from an uncle, Nicholas Grady, a barrister who became a successful gambler in Paris but who ended his life with a razor.

It was the home of Standish Grady or O’Grady in 1814 and Henry O’Grady in 1837 and at the time of Griffith’s Valuation.

The Grady or O’Grady family continued to live at The Grange until 1861, when the estate was inherited by the Croker family in 1861. Edward Croker was the son of the Revd Robert Croker of the Ballynagarde family and his wife, Margaret O’Grady of The Grange.

Ballinagarde was built in 1774 by the Croker family, originally from Devon. The best-known story about the family concerns Old John Croker. As he lay dying, he refused to believe his son, the Revd Robert Croker, who told him he was going to a better place.

‘There’s a land that is fairer and better than this you’ll regard,’ Robert told his dying father.

Old Croker surveyed his fine demesne, replied to his son ‘I doubt it,’ and promptly died. To this day, Ballinagarde is known locally as ‘I Doubt It Hall.’ The house was also the ancestral home of the notorious Richard ‘Boss’ Croker of Tammany Hall in New York.

The Revd Robert Croker and his wife Margaret O’Grady were the parents of Edward Croker, who inherited the estate at The Grange, Co Limerick, following the death of his uncle, Thomas O’Grady, in 1861. The estate included 2,121 acres in the 1870s, and the great house, The Grange, became known locally as ‘Crokers.’

The Grange was the seat of Captain Edward Croker in 1894, who was a magistrate (JP) for Co Limerick and a deputy lieutenant for the county. But Croker was also described as ‘a worthless spendthrift who brought up an arrogant race of blockheads of both sexes.’ He bankrupted his estate, and when he died unmarried in 1896 the house and the estate were inherited by his sisters, Helen who was widowed and Caroline who was single.

Helen Maria Croker married Sir Swinnerton Halliday Dyer (1833-1882), who had fought in the Crimean War, in 1858. Caroline Croker continued to live at The Grange, and the 1911 Census shows she was single, 72, and living at The Grange. The staff at the house included two domestic servants, a cook, a housemaid, a laundress, a kitchen maid, and a coachman.

Lady Dyer died in 1915, and her sister Caroline Croker died in 1926, when the furniture of the house was catalogued for sale. The house remained vacant in the decades after the Croker sisters died, and the estate was acquired by the Land Commission, which divided the lands among tenants and local small farmers.

The house may have remained in good repair for a while, but it was soon dismantled. The fireplaces, interior doors, painted or stuccoed ceilings and anything else of value was removed, and the roof was stripped, and the house was left to fall into ruin in the 1940s.

The house, now a ruin, was built as a six-bay, three-storey country house, with a breakfront to the front or south elevation, a rendered eaves course and chimney-stacks.

Despite its ruinous state, The Grange remains a prominent feature on the Co Limerick landscape, and retains much evidence of its originally grand and imposing form as well as notable classical elements, such as the window surrounds and the quoins. The intact breakfront adds to the imposing façade and enhances the vertical emphasis of tall façade.

The remains of outbuildings are evidence of the former status of the house. The surviving remains of the walled garden include rubble stone walls and a cast-iron gate.

There are cut stone sweep walls at the entrance with square-profile carved limestone piers that have barrel caps and cast-iron gates and railings. The entrance piers and gates are well-crafted and they add artistic and architectural interest to site from the roadside.

Meanwhile, Lady Dyer’s grandson, Sir John Swinnterton Dyer (1891-1917), who inherited the Dyer family title, had become a captain in the Scots Guards in World War I, was decorated with a Military Cross, and was killed in action in 1917.

One of the most distinguished members of the Dyer family in recent decades has been a distant nephew of Helen Croker, Sir (Henry) Peter Francis Swinnerton Dyer (1927-2018), a Cambridge mathematician who specialised in number theory.

He was best known for his part in the Birch and Swinnerton-Dyer conjecture relating algebraic properties of elliptic curves to special values of L-functions, which was developed in the 1960s. 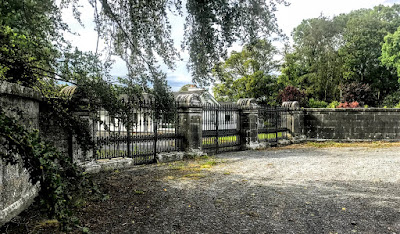 The gates that once led into the driveway and up to The Grange (Photograph: Patrick Comerford, 2019)