A table for three in
Jamie’s Italian in Dundrum 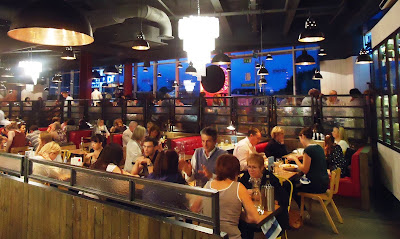 Many of us have read Jamie Oliver’s cookery and recipe books and watched his television programmes. I have already had lunch in Jamie’s Italian at Milsom Place in Bath and shortly after it opened in Cambridge at Jamie’s Italian in the Old Library in Wheeler Street, between the Eagle and Market Hill.

But I had never been to Jamie’s for dinner, and never eaten in Jamie’s in Dublin until last night.

Jamie Oliver says he set up his chain of Italian restaurants, beginning in Oxford in June 2008, “to re-create what Italians are most proud of – fantastic, rustic dishes, using recipes that have been tried, tested and loved!”

He was inspired by his meeting with Gennaro Contaldo in the kitchen of London’s Neal Street restaurant back in the early 1990s. Gennaro Contaldo grew up in a tiny fishing village on the Amalfi coast, where he learned how simple, fresh ingredients, prepared and cooked with love and passion, become truly great dishes.

On the back of his success in Oxford, Jamie Oliver opened a second restaurant in a Georgian conversion in the centre of Bath. Since then, this has grown to more than 30 restaurants worldwide. In February 2010, he acquired the Old Library in Cambridge – a Grade-II listed building with a magnificent dome that rises above the main dining room – and he opened his first Irish restaurant in Dundrum last September 2012. 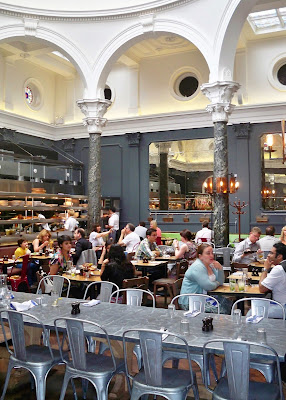 Inside Jamie’s Italian in the Old Library in Cambridge (Photograph: Patrick Comerford, 2013)

Jamie’s Italian was designed to be accessible and affordable, a place where anyone is welcome and everyone is comfortable, no matter how much you spend or how long you stay.

Jamie Oliver says he wanted to create an environment with a “neighbourhood” feel, inspired by the “Italian table” where people relax, share, and enjoy each other’s company.

However, the Dundrum restaurant hardly has a “neighbourhood” feel to it – it is large, at a number of levels, and the music in the background could hardly have been Italian. Three of us were squeezed into a small table, while many other larger tables, with seating for four, had only two people at them.

On the other hand, it is silly to fault a restaurant with being noisy or busy on a Thursday evening. We were welcomed warmly and received good attention throughout our meal. 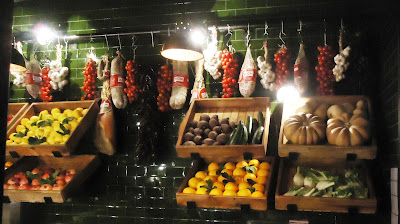 For starters we had:

For our main courses, we had:

With these, we shared a bottle of house wine and two of us had espressos.

The food was good, the portions were generous, but we were in and out in less than an hour and a half. I would not have made a mental link between Jamie Oliver – and definitely not between authentic Italian restaurants – and “fast food.”

But it was a good evening, and we enjoyed strolling through Dundrum afterwards. 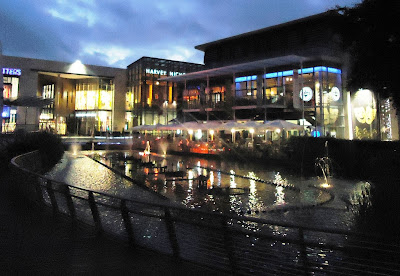