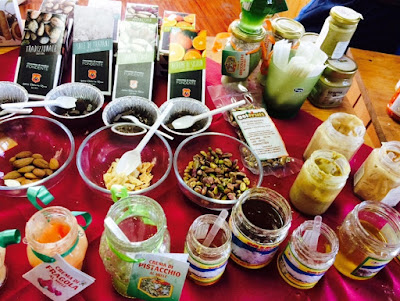 Almost all the pistachios in Italy are grown on the slopes of Mount Etna, near the Nelson estate at Bronte (Photograph: Patrick Comerford, 2015)

Sicily and Sardinia are the only parts of Italy that Napoleon never conquered, and Sicily is the only part of Italy where pistachio trees are grown.

Indeed, more than 85% of Sicily’s pistachio trees grow on the slopes of Mount Etna, because of its mineral-rich volcanic soil, and most of those trees grow in orchards around the town of Bronte, on the north-western slopes of the volcano.

You simply cannot get enough pistachios from Bronte anywhere near Mount Etna.

As Napoleon advanced though Italy, King Ferdinand IV and the Bourbon court fled revolutionary Naples in 1799. They were brought to safety in Sicily by Admiral Horatio Nelson on his ship. Also on board were Sir William Hamilton, and Emma Lady Hamilton.

To show his gratitude, King Ferdinand made Nelson a Sicilian duke, with the title of Duke of Bronte, and gave him a large estate – with pistachio orchards, needless to say. The estate was then called named Maniace, after the Byzantine general George Maniakes, but it was promptly renamed Castello Nelson.

The grant of Bronte, allowed Nelson to name any members of his family as his heir, but his will never named Orazia, the daughter he had with Emma Hamilton. Instead, Bronte and the ducal title passed to Nelson’s elder brother, the Revd William Nelson.

Nelson’s family still owned the Bronte estate until 1978, and the family still actually own the nearby English cemetery.

Patrick Prunty, who was born in Rathfriland, Co Down, on Saint Patrick’s Day 1777, the son of a farm labourer. He started off life as an apprentice blacksmith and then an apprentice linen draper, but eventually became a teacher and then managed to fund his way through a theological education at Saint John’s College, Cambridge.

Either because he was so in awe of Nelson, or so keen to mask his Irish identity, he changed his family name while he was at Cambridge to Brontë, adding an affectatious umlaut to the final E.

He hardly changed his name in honour of the cyclops Brontes, buried beneath Mount Etna after being slain by Apollo.

Can you imagine reading the novels of Charlotte, Emily and Anne Prunty?

Pistachio pesto on sale on the slopes of Mount Etna (Photograph: Patrick Comerford, 2015) 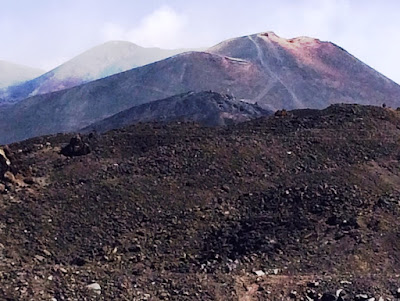 Two-thirds of the way up the slopes Mount Etna ... there was still more to go (Photograph: Patrick Comerford, 2015)

Who could visit Sicily without wanting to go up Mount Etna? It is one of Sicily’s main tourist attractions, with thousands of visitors every year.

I am staying all this week in Recanati, near Giardini Naxos, on the east coast of Sicily, and it seems that everywhere I go the scenery is dominated by two mountain tops: Monetauro, topped by the town of Taurmino, and Mount Etna, covered with barest of clouds at any time but never showing any billows of smoke, although it is still classified as an active volcano, and the last eruption was on 27 January 2014.

Mount Etna is the tallest active volcano on the European continent, and its height is put at 3,350 metres (10,990 feet) high, making it 2.5 times the height of Mount Vesuvius, although the calculated height of Mount Etna can vary from time to time with eruptions at the summit.

Greek mythology says the deadly monster Typhon was trapped under Mount Etna by Zeus, and the forges of Hephaestus were located beneath its slopes. 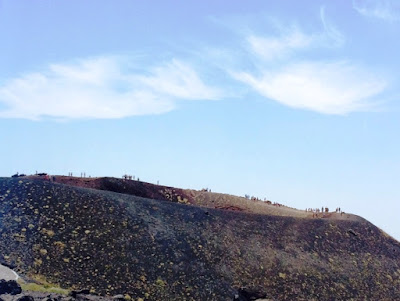 The summit of Mount Etna has at least five distinct craters and the flanks have more than 300 vents, from small holes to large craters (Photograph: Patrick Comerford, 2015)

Although the summit has at least five distinct craters, the flanks have more than 300 vents ranging in size from small holes in the ground to large craters that are hundreds of metres wide.

The fertile volcanic soil explains why the lower slopes of the volcano are covered with vineyards and orchards. We left Recanati early in the morning by bus and drove up through the pretty, 18th century small town of Zafferana Etnea on the south-east side of Etna, and on through flowering citrus groves, vineyards, orchards and woods rich with chestnut trees, beech and pine.

The rich summer growth soon gave way to the black-and-grey volcanic landscape, where some hard plants continued to push through the surface. 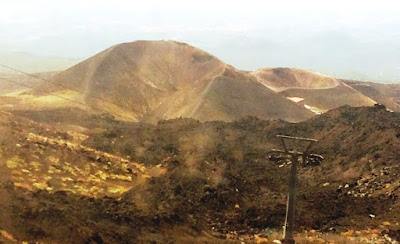 The winding road brought us to Rifugio Sapienza, a ski area on the south slopes of the crater at a height of about 1,910 metres. From there we took the Funivia dell’Etna cable car to Monte Montagnola at 2,500 metres.

We had made it up more than two-thirds of the way. 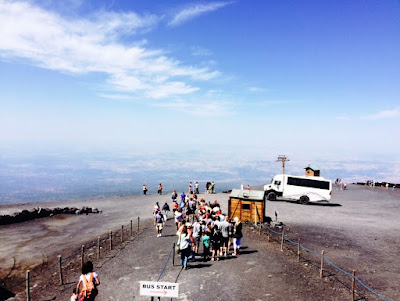 From there, minibuses were working in relays to bring people a little further up – not quite to the top, but to a crater area at 2,920 metres. Instead, we lingered a while as watched the climbers trekking up the slopes, sipped our coffees and bought some locally made honey and pistachio products before returning in a cable car to Rifugio Sapienza.

It was time for more coffee at Esagonal, at the Piazzale Funivia, before returning through the groves and vineyards around Zafferana Etnea.

We were back in Recanatia in the early afternoon. If trapped Typhon was angry, then there was short thunderstorm while we went for a walk on the beach and a short swim. 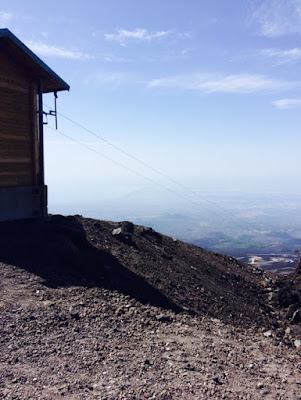 Time to stop and think on the south slopes of Mount Etna (Photograph: Patrick Comerford, 2015)