The ‘leafy avenues’ of Betjeman’s Ealing

John Betjeman’s poem Return to Ealing, which I quoted yesterday when I was discussing my visit to Saint Peter’s parish, was first published as Lines written to Martyn Skinner before his Departure from Oxfordshire is Search of Quiet – 1961.

Betjeman’s friend, the poet and writer Martyn Skinner (1906-1994), is best remembered for his long poem The Return of Arthur, and was also a close friend of the Benedictine Dom Bede Griffiths.

Betjeman could be scathing about suburban developments around London, and once, during World War II penned the often quoted line for which many never forgave him:

But if that is what he thought of Slough, he seems to have had a better liking for Ealing. The poet was a keen conservation campaigner, and with his support the Bedford Park Society succeeded in having Ealing Borough Society declare its first conservation area in 1969. Later, Betjeman provided a foreword for Ealing Walkabout: Journeys into the History of a London Borough by Kate McEwan.

His poem Return to Ealing was written over half a century ago, in 1961, even before the construction of the Great West Road. In my walks about Ealing, I think – despite his witty sarcasm – Betjeman enjoyed Ealing, but feared, just as the hayfields of Perivale disappeared, the looming expansion of Heathrow Airport would destroy the tranquillity of the skies above Ealing.

I wonder what he would make of Ealing if he were to return today. 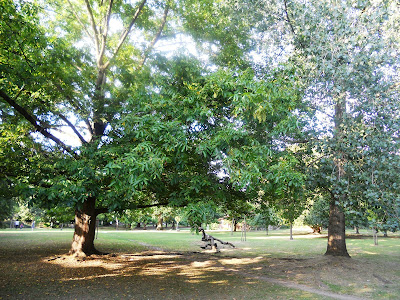 Return to Ealing, by John Betjeman

No early morning tractors
The thrush and blackbird drown,
No nuclear reactors
Bulge huge below the down,
No youth upon his motor-bike
His lust for power fulfil
With dentist’d drill intent to kill
The silence of the hills.

In Ealing on a Sunday
Bell-haunted quiet falls,
In Ealing on a Monday
‘Milk-o!’ the milkman calls;
No lorries grind in bottom gear
Up steep and narrow lanes,
Nor constant here offend the ear
Low-flying aeroplanes.

Return, return to Ealing,
Worn poet of the farm!
Regain your boyhood feeling
Of uninvaded calm!
Where smoothly glides the bicycle
And softly flows the Brent
And a gentle gale from Perivale
Sends up the hayfield scent.