A Lynders gathering in the year of the gathering 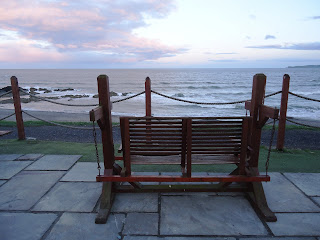 Watching the sea and the beach at the Waterside Hotel before a gathering of Lynders cousins in Donabate this evening (Photograph: Patrick Comerford, 2013)

The weather today has been mixed, and I’m in Armagh from tomorrow (Thursday) for three days at the General Synod of the Church of Ireland.

But after work today, I spent a few hours in Donabate, taking a brief walk by the beach and meeting some cousins.

Despite the choppy waters, there was a clear view across to Lambay Island, the Irish Sea and back to Malahide.

Later there was a gathering in the Waterside Hotel in Donabate of a few Lynders cousins. Christine Lynders, who has moved back to New York after 15 years in California, is on her second visit to Ireland and to the Lynders home territory in Donabate and Portrane.

I have not met some of these cousins for almost 20 years; some I have never met before. Perhaps we need a wider gathering of the full Lynders family in the year of the gathering.

Posted by Patrick Comerford at 22:56 No comments: 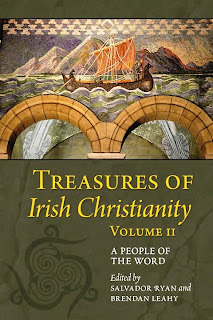 I have been reading over some proofs in recent evenings of chapters in books that are being prepared for publication during the next few months.

The first paper, ‘Comerford Monuments in Callan and the Search for a Family’s Origins,’ is due to be published in August in a book being edited by local historian Joe Kennedy. This is his second volume marking the 800th anniversary of the foundation of the town of Callan in Co Kilkenny.

The two other chapters are due to appear in the next month or two in Treasures of Irish Christianity Volume II: People and Places, Images and Texts, edited by Salvador Ryan and Brendan Leahy.

When the first volume of Treasures of Irish Christianity was published last summer, it received great acclaim. Now a second volume has been compiled by Salvador Ryan and Brendan Leahy.

Salvador Ryan is Professor of Ecclesiastical History at Saint Patrick’s College, Maynooth; Brendan Leahy has recently been appointed Bishop of Limerick, and before that he was Professor of Systematic Theology in Maynooth.

Volume II offers readers further scholarly yet readily-accessible short articles on a vast array of treasures from the Irish Christian tradition, with a focus on the Irish and their relationship with the Word.

The topics included range from religious folk tales to reflections on Yeats, Joyce, Kavanagh and Beckett; from words on the margins of ancient manuscripts to the first Lutheran congregation in Dublin; from early High Crosses to the 13th-century Kilcormac Missal; from the Mediaeval Office of Saint Brigid to the architecture of Pugin, father and son; and from Church of Ireland hymnody to the recent publication, Share the Good News.

These chapters have been written by a large number of Irish scholars from a variety of disciplines, and this second volume is also richly illustrated.

My two chapters are: “Bale’s Books and Bedell’s Bible: Early Anglican Translations of Word and Liturgy into Irish,” and “‘Thou my high tower’: The Celtic Revival and Hymn Writers in the Church of Ireland.”