A bishop on a street of pubs and plaques 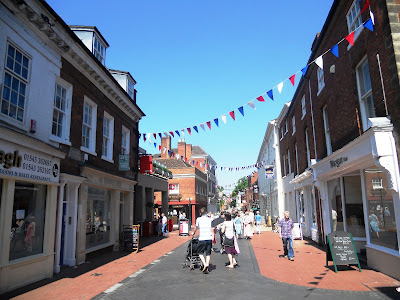 Over the past three days I have walked up and down Bird Street more than a dozen times on my way into Lichfield from the Hedgehog, where I was staying for an extended weekend break at Pentecost.

Bird Street in Lichfield once had two hotels. The Swan has become a restaurant and apartments, but the George is still thriving. The street still has some wonderful restaurants, but it could well be described as a street of prelates and philanthropists, or a street of pubs and plaques.

Bird Street was once home too to Soda Streat, the only Irish café that I knew of in Lichfield, but it closed about two or three years ago.

The newest cafe in the area opened last Tuesday – in the kiosk that was once the public lavatories on the corner of Beacon Street and Swan Street, opposite Ask and the former Swan in Bird Street.

The pubs on Bird Street once included the former Swan and still include the King’s Head (No 21), Apres (No 13), and the Gatehouse (No 1).

On the corner opposite New Minster House, there are plaques and a mosaic recalling the Lichfield-born writer Samuel Johnson (1709-1784), reminding us: “Dr Samuel Johnson Born in the City of Lichfield 1709 died 1784 this mosaic by John Myatt after a portrait by Sir Joshua Reynolds was donated to the Citizens of Lichfield in June 1976 by Lichfield District Arts Association and Berger Paints.” 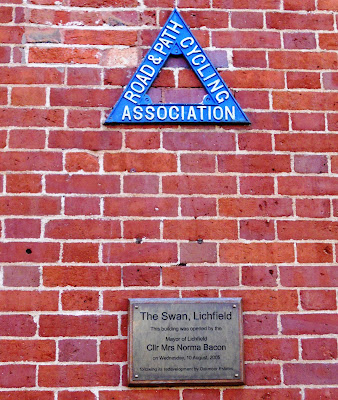 A plaque on the wall of the former Swan commemorates the Road and Path Cycling Association (Photograph: Patrick Comerford, 2012)

On the wall of the former Swan Hotel, a plaque commemorates the Road and Path Cycling Association. The King’s Head, at No 21 Bird Street, has a plaque recalling Colonel Luke Lillingston, who raised a regiment of foot in the pub on 25 March 1705.

Other plaques include one at the George Hotel (Nos 12-14) recalling George Farquhar (1677-1707), the playwright and author of the Beaux Stratagem, who lived in an inn on the site when he was a lieutenant in the Grenadiers in 1705.

The plaque above Temple Tree commemorating the Newton Brothers ... a bishop and a philanthropist (Photograph: Patrick Comerford, 2012)

Further down Bird Street, on the shared wall at Temple Tree, a hair salon at No 11, and Lal Bagh, an Indian restaurant at No 9, a plaque commemorates Bishop Thomas Newton (1704-1782), who was born here, and his brother, Andrew Newton, the founder of Newton’s College. The plaque above No 11 and No 9 reads:

“Bishop Newton (Bristol) was born here. Born 1704 Died 1782 He was the brother of Andrew. The founder of Newton’s College in the city. Educated at Lichfield Grammar School.”

No 11 and No 9 Bird Street are Grade II listed buildings. These two were originally two two-storey houses, built in the early 18th century. Forty years ago, the architectural historian Sir Nikolaus Pevsner, in his guide to Staffordshire (1974) noted that at the back of No 11 here was a domed room with a shell mosaic.

Thomas and Andrew Newton were the sons of a Lichfield brandy and cider merchant who lived at No 11 Bird Street. Thomas Newtown was born here on 1 January 1704, and was educated at Lichfield Grammar School before going on to Trinity College, Cambridge, where he was later elected a fellow.

Newton famously regarded the “preservation of the Jews” as “one of the most signal and illustrious acts of divine Providence,” along with “the destruction of their enemies.”

Further north, on Beacon Street, at the entrance to the Cathedral Close, is Newtown’s College, which was established by the bishop’s younger brother, Andrew Newton (1728-1806).

Despite its name, Newtown’s College is not an educational establishment. It was endowed with £20,000 by Andrew Newton in 1800 as an almshouse for the widows and unmarried daughters of clergy, particularly clergy who had served in Lichfield Cathedral.

Joseph Potter was the architect for the college, and the college buildings include a range of 16 dwellings with a central doorway designed by Potter and built in brick, with stone facings on the south side of the road from Beacon Street. Potter also designed a house at the south-west corner of the range in Beacon Street that provided four further dwellings.

In the course of the building work, the mediaeval west gate of the Cathedral Close was demolished. The first almswomen moved in towards the end of 1803, and Newton died just over two years later on 14 January 1806, aged 77.

The college trustees transferred the building to the Dean and Chapter of Lichfield Cathedral in 1988. Although the former Bishop of Bristol, who was born in Lichfield, is remembered in the street of pubs of plaques where he was born, he is not commemorated in the cathedral. However, his brother Andrew Newton is commemorated by a monument designed by Sir Richard Westmacott. 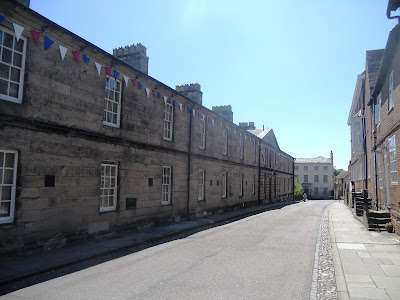 Newton’s College (left) ... the lasting legacy in the Cathedral Close of Andrew Newton, who was born in Bird Street (Photograph: Patrick Comerford, 2012)

Posted by Patrick Comerford at 10:38 No comments: