Harvest time by the lakes in
the land of William Bedell 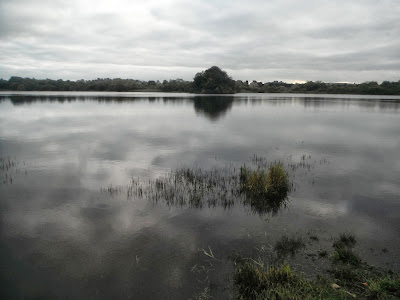 I was in Belturbet, Co Cavan, on Sunday evening [13 October 2013], preaching at the Harvest Thanksgiving Service in Annagh Parish Church at the invitation of the Revd Tanya Woods.
This was my second harvest sermon this year, having preached at the harvest in Christ Church Cathedral, Dublin, the previous week.

It had been a long working weekend, teaching modules on a number of courses, leading a Bible study in a tutorial group, speaking at the annual conference of Affirming Catholicism Ireland, and preaching at the community Eucharist.

There was no time or opportunity for a walk on a beach or by a river. But the late afternoon journey from Dublin through Co Meath and the length of Co Cavan was a joyful reminder to two of us of why we celebrate harvest at this time of the year.

This has been one of the best summers on record in Ireland, and this autumn is exceptionally mild so far too. Most of the harvest has been completed on the east side of the island, the harvest is in and fields that were once golden have been reduced to stubble, with little left to bring in. Farmers have a lot to be thankful too.

It was tempting to stop awhile in Virginia, which is one of the prettiest towns as you enter Ulster and where the shards of sunlight were skimming in silver slivers across the surface of Lough Ramor.

We pressed on towards Cavan, but the small lakes on both sides of the road persisted in catching our eyes, so that eventually we stopped at an unmarked, perhaps even unnamed, lake somewhere between New Inn and Lavey to take in the reflections and the calm autumn scene. 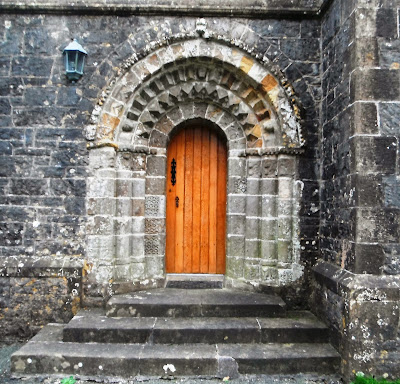 Outside Cavan, beyond the Radisson Hotel on the former Farnham estate, we stopped at Kilmore, where Tanya lives, to see Saint Fethlimidh’s Cathedral. I had preached here once when the Very Revd David Godfrey was the Dean of Kilmore and stayed in the deanery, and I been back again I few years later for an ordination late one evening.

But I had never had an opportunity before to photograph the cathedral, with its mediaeval Romanesque doorway and its memorials to the martyred Bishop William Bedell, who is buried in the old churchyard nearby. 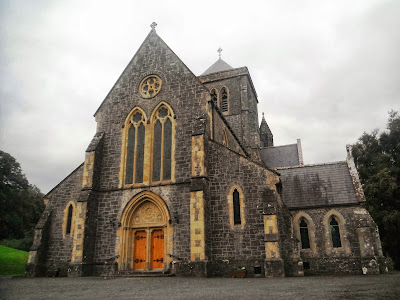 The Victorian cruciform cathedral was designed by William Slater and built in 1860 in the Middle Pointed Gothic style, incorporating the Romanesque door from the older cathedral in the vestry on the north side.

The cathedral traces its story back to the first church was built by Saint Feithlimidh in the sixth century. In 1454, Bishop Andrew McBrady rebuilt the ancient church after petitioning Pope Nicholas V to raise the church to the status of a cathedral.

By 1858, the cathedral was “decayed, dilapidated and too small to accommodate the parishioners.” The new cathedral was built in the grounds of the Bishop’s Palace at a cost of £8,000. The old cathedral is now used as the Parish Hall. 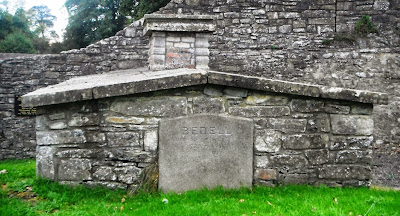 Between the new cathedral and the old cathedral, e stopped to visit the grave of Bishop William Bedell (1571-1642), who is buried in the churchyard. He was a former Provost of Trinity College, Dublin, and a plaque on the gate into the old churchyard recalls that he commissioned one of the earliest translations of the Bible into the Irish language, but does not recall his martyr’s death in the civil wars that wracked Ireland before the fall of Charles I and the rise of Cromwell.

On the other side of the crossroads, a newer churchyard is also the burial place of the Barry Maxwell family, who once owned the Farnham estate nearby. The Farnham family were also landlords of Bunclody, Co Wicklow, in the 18th and 19th centuries, to which they gave their family name so that it was known as Newtownbarry.

Successive holders of the Farnham title also took a keen interest in the Revd Edward Nangle’s mission in Achill Island, Co Mayo, and brought many families from the Kilmore area of Co Cavan to Achill Island, where prominent Cavan family such as Sheridan survived for generations.

Belturbet parish was welcoming once again, but by the time we arrived it was too dark and too late to photograph the town.

After the harvest, a half moon was rising above the church, and the autumn night sky was bedecked with stars. It was after 11 when I got back to south Dublin.

Sunset on the hills and fields in Kilmore (Photograph: Patrick Comerford, 2013)