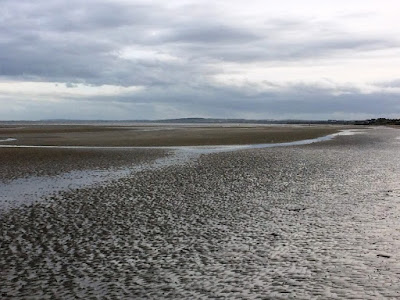 Autumn lights on the beach in Bettystown this afternoon (Photograph: Patrick Comerford, 2015)

I served as the Deacon at the Choral Eucharist in Christ Church Cathedral, Dublin, this morning [25 October 2015], the Fifth Sunday before Advent, reading the Gospel and assisting at the administration of the Holy Communion.

This morning’s Gospel reading [Mark 10: 46-52] recalled the story of the healing of blind Bartimaeus at the gates of Jericho:

It brought me back to yesterday’s story about the pilgrims who died outside the gates of Lichfield and whose mass graves have recently been unearthed in shallow ground in Saint John’s Hospital, Lichfield.

And it brought me back too to my meeting in the Diocesan offices in Birmingham with volunteers with the Anglican mission agency Us (previously known as USPG), where there was an interesting reflection on the meaning of this Gospel story by Davidson Solanki, International Programmes Manager of Us.

Speaking about the support Us gives to programmes using the Church and Community Mobilisation Process (CCMP) and encouraging local Anglican churches to be the Christian response within their own local communities.

In his sermon in the cathedral this morning, Archdeacon Ricky Rountree related the plea of Bartimaeus to the tradition of the Jesus Prayer, which he encouraged people to pray regularly. 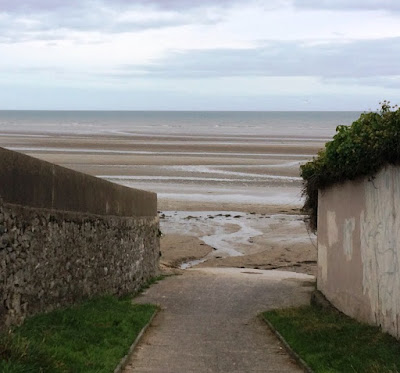 The beach at Bettystown, close to Relish, this afternoon (Photograph: Patrick Comerford, 2015)

Later, two of us drove north to Bettystown, Co Meath, for walks on the long sandy beach before and after lunch in Relish.

It is a few months since I have been in Bettystown for either a walk on the beach or for lunch in Relish. Since then, the restaurant has been fitted out with new floors and new chairs. And the food is still excellent.

On the beach, there were clusters of families going for long walks, and one solo cyclists was traversing the length of the beach, back and forth, cycling along the wet ridges left in the wet sand by the receding tide. 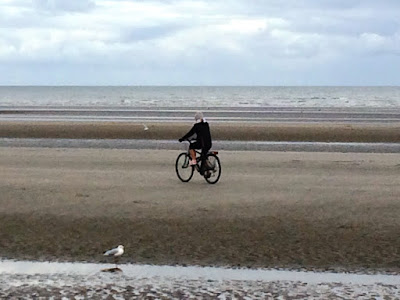 A lone cyclist on the beach at Bettystown this afternoon (Photograph: Patrick Comerford, 2015)

In a local supermarket, we bought some locally-grown strawberries. It is interesting how late the Irish-grown strawberries have continued on the shelves this year, considering the poor summer meant they were late arriving on the markets.

From Bettystown we drove back through Laytown and Julianstown, and then west towards Duleek, and found ourselves unexpectedly at Kennedy’s Pumpkin Patch.

Although this is a free event, it is so popular that free tickets are snapped up well in advance, and there is a waiting list for the remaining few days. It all began in 2011 and has grown in popularity since. This year’s event began yesterday [24 October 2015] and continues until Wednesday evening [28 October]. 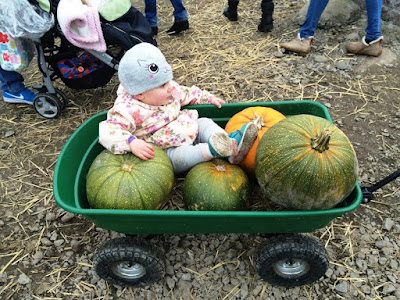 Down on the farm … enjoying Kennedy’s Pumpkin Patch near Julianstown this afternoon (Photograph: Patrick Comerford, 2015)

Visitors are invited to pick their own pumpkins at Kennedy’s Pumpkin Patch and to enjoy Halloween treats and tea, coffee and hot chocolate.

The Halloween theme runs through the whole area, with a tongue-in-cheek sense of humour.

The clocks went back an hour last night, and the evenings are closing in much earlier. As we drove towards Navan it was getting darker.

The late strawberries show how autumn is lingering. But the pumpkins are a sign that winter is not far away. 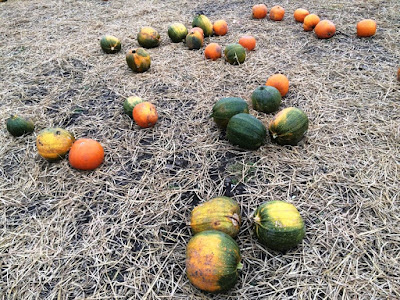 Pumpkins in the field at Kennedy’s Pumpkin Patch near Julianstown this afternoon (Photograph: Patrick Comerford, 2015) 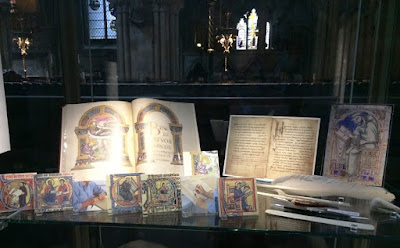 The exhibition in Lichfield Cathedral, ‘Books and Literacy in the Age of Saint Chad,’ includes exhibits from the British Museum (Photograph: Patrick Comerford, 2015)

After attending the mid-day Eucharist in Lichfield Cathedral yesterday [24 October 2015], I went to the special exhibition in the Chapter House, where a number of items from the British Museum are on display.

The exhibition in Lichfield Cathedral, “Books and Literacy in the Age of Saint Chad,” includes items from the British Museum such as the Brandon Plaque, which gives clues about how works may have been bound in Anglo-Saxon times.

The Saint Chad Gospels is believed to be older than the Book of Kells, and it is likely that it was created in the eighth century to adorn the shrine of Saint Chad, who died in Lichfield in 672.

Other items on loan to Lichfield Cathedral include an eighth century book decoration from Ireland, the Bowleaze Cove Jewel which originally decorated a pointer used to follow the words when reading, a ninth century ring showing a figure holding a book, the eighth century Blythburgh Writing Tablet from Suffolk, and a seventh or eighth century stylus from the Marne region in France. 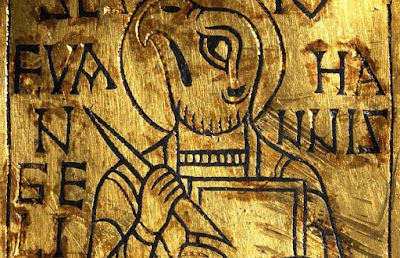 The Brandon Plaque shows a figure with an eagle head, representing Saint John the Evangelist. His identity is emphasised by the book and the quill pen which he is holding. This may have been one of a set of four such plaques, representing each of the four evangelists and used to embellish the cover of a Gospel book.

A gold ring shows a winged figure with a halo who is said to be either an angel or one of the four evangelists holding a Gospel book. The Anglo-Saxon wearer of such an elaborate ring would surely have respected and admired books such as The Saint Chad Gospels.

A tiny gold disc displaying a high standard of craftsmanship also depicts Saint John, this time with an eagle and the letters A and q, an abbreviation for Aquila (Eagle), and a book.

A gilded bronze book mount from the eighth century comes the Phoenix Park in Dublin. Its decoration is similar to the style used to decorate Anglo-Saxon manuscripts.

The Bowleaze Cove Jewel, found near Weymouth in Doret and dating from the ninth century is the head of a pointer that helped a reader to follow the words in book and to turn the pages.

The Dean of Lichfield, the Very Revd Adrian Dorber, said: “Our partnership with the British Museum is very important to us, and was established during our ‘Holy Writ: Modern Jewish, Christian and Islamic Calligraphy’ exhibition last year.” He added: “It’s a great honour to display items from the British Museum, and we hope many people will come to see these artefacts while they’re on display here at the cathedral.”

“Celts: Art and Identity” at the British Museum is the first major exhibition to examine the full history of Celtic art and identity, and is organised in partnership with National Museums Scotland.

The cathedral exhibition illustrates how the decoration of books in Anglo-Saxon times and the way they were used reflected the great value placed on books and literacy. The Saint Chad Gospels are no longer in their original binding, however some of the exhibits give clues as to how Anglo-Saxon binding might have looked.

These complementary exhibitions continue at Lichfield Cathedral and the British Museum until 31 January 2016. 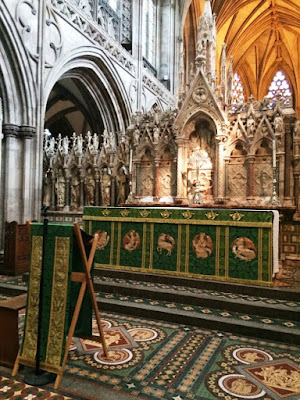 Posted by Patrick Comerford at 07:36 No comments: