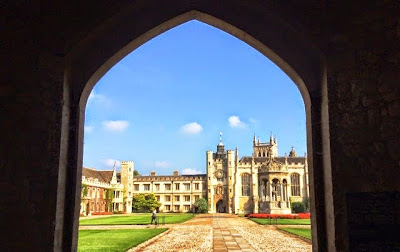 Trinity College Cambridge ... FWH Myers wrote ‘Hark, what a sound, and too divine for hearing’ when he was a Fellow from 1865 to 1874 (Photograph: Patrick Comerford 2014)

As part of my spiritual reflections for Advent this year, I am looking at an appropriate hymn for Advent each morning. This morning [16 November 2014], I have chosen the Advent hymn ‘Hark, what a sound, and too divine for hearing’ by Frederic William Henry Myers (1843-1901).

Myers was the son of the Revd Frederic Myers (1811-1851), once a Fellow of Clare College, Cambridge, and a brother of the poet Ernest Myers (1844-1921). Myers was only seven when his father died in Clifron, Cumberland, and he was taken to live first in Blackheath and then in Cheltenham, where he attended Cheltenham College. While still a schoolboy, he showed a great aptitude for poetry, winning school prizes and coming second in a national competition for a Robert Burns centenary poem.

Myers went on to Trinity College, Cambridge, where he was outstanding student. He was Bell Scholar in 1861, Craven Scholar in 1863, Chancellor’s English Medallist 1861 and 1863, Camden Medallist 1862 and Members’ Prizeman 1863, 1864 and 1865, although he was forced to resign the Camden medal for 1863 after accusations of plagiarism.

He graduated BA in 1864 as 2nd Classic joint with the future theologian and Bishop of Durham, HCG Moule (1841-1920), and later that year he took a first in the Moral Sciences Tripos.

Myers was elected a Fellow of Trinity in 1865, along with his friend Moule, and he remained a Fellow until 1874, a year after Moule became Dean of Trinity College. He also held the posts of assistant tutor and college lecturer in classics until 1869. However, he did not feel suited to teaching, and in 1872 he became an inspector of schools, a post he held until shortly before his death.

FWH Myers died in Rome on 17 January 1901. His papers were given to the Library of Trinity College Cambridge in 1970 by his granddaughter, th painter and textile designed Mrs EQ (Elsie Queen) Nicholson (1908-1992).

Some regard Myers as an “important early depth psychologist,” and say he had a significant influence on the wok of people like William James and Carl Jung. But his early life – marked by numerous sexual liaisons, and his later life – marked by his interest in psychic research and spiritualism and his use of mediums, make him an unexpected and untypical writer of a devotional Advent hymn.

By 1869, Myers, like many of his Cambridge intellectual contemporaries, had lost his faith, but wrote that his agnosticism affected him like “a dull pain borne with joyless doggedness, sometimes a shock of nightmare panic amid the glaring dreaminess of the day.” He felt that his hope and the hope of the world was vanishing.

When he recovered his beliefs later in life they found a very different expression. Dr Charles Richet, the Nobel laureate in medicine, wrote: “If Myers was not a mystic, he had all the faith of a mystic and the ardour of an apostle, in conjunction with the sagacity and precision of a savant.”

However, this hymn is part of a long poem, Saint Paul, published by Myers in 1867, while he was still a Fellow of Trinity College, Cambridge. It soon became very popular, and was followed in 1882 by The Renewal of Youth and Other Poems. He also wrote books of literary criticism, in particular Wordsworth (1881) and Essays, Classical and Modern (in two volumes, 1883), which included a highly-regarded essay on Virgil.

Myers’s long poem Saint Paul was written while he was a student and submitted for the Seatonian verse competition in Cambridge. It ran to a full 150 stanzas and was based on II Corinthians 12: 9: “And he said unto me, My grace is sufficient for thee.”

The poem failed to win the prize, but Myers had it published in 1867. It ends with the verses that have been adapted as the last three stanzas of this Advent hymn. The first stanza is not part of the original poem, and may not have been written by Myers.

This hymn, describing Christ’s second coming as spoken of in the closing chapter of the Book of Revelation, reveals Myers’s spirituality at the time, and contains the promise of the return and the gathering up of all things in Christ. It tingles with excitement as it expresses all the longing, all the expectancy, all the trust and all the waiting of Advent. This is a hymn not about watching but about listening ... listening for sounds beyond the mortal spectrum. The last verse breaks through the sorrows, fears and sin of the past and the present that gets in the way of looking to the future and the hope of the Second Coming of Christ:

Yea, through life, death, through sorrow and through sinning,
he shall suffice me, for he hath sufficèd:
Christ is the end, for Christ was the beginning,
Christ the beginning, for the end is Christ. 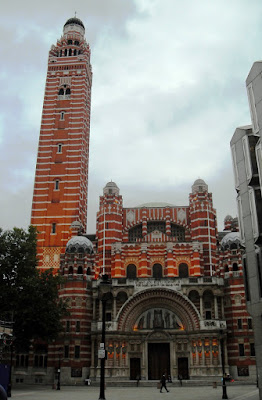 The tune Highwood was written by Sir Richard Runciman Terry (1865-1938). Terry was an organ scholar at Oxford, and then a choral scholar at King’s College, Cambridge. He became a Roman Catholic in 1896, and was the Music Master at Downside School before being appointed the organist and the first Director of Music at Westminster Cathedral. In the early 20th century, Terry made an impressive contribution to the music of the Roman Catholic Church in England.and first wrote this tune for the wedding hymn ‘O perfect love, all human thought transcending’ at the suggestion of his uncle, Lord Runciman. The tune is named after a wood on Lord Runciman’s estate at Doxford, seven miles north of Alnwick in Northumberland.

Highwood is a sweeping melody, soaring upwards, and then falling back to earth with a sigh. The setting of Myers’s words has been very successful, with exultation in the words taken up in the music.

Hark, what a sound, and too divine for hearing, by Frederick WH Myers

Hark, what a sound, and too divine for hearing,
stirs on the earth and trembles in the air!
Is it the thunder of the Lord’s appearing?
Is it the music of his people’s prayer?

This hath he done, and shall we not adore him?
This shall he do, and can we still despair?
Come let us quickly fling ourselves before him,
cast at his feet the burden of our care.

Yea, through life, death, through sorrow and through sinning
he shall suffice me, for he hath sufficèd:
Christ is the end, for Christ was the beginning,
Christ the beginning, for the end is Christ.