Despite the warnings of another impending storm across the island, this morning was a calm bright morning.

By the time two of us arrived in Skerries the high tide was about to retreat, and there was little sand to see along the shoreline at the South Strand.

The waves were a little choppy, but the sound as they broke against the pebbles and sand was gentle and soothing, and when I turned my back against the sun to face north and walk the length of the beach I could feel the warmth of the sun on my back and on the back of my head. 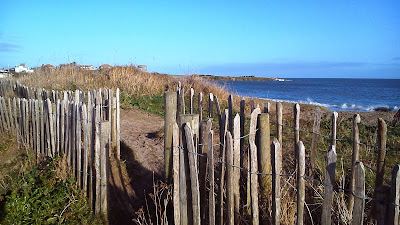 The South Beach in Skerries this afternoon ... my first beach walk of the New Year (Photograph: Patrick Comerford, 2014)

Although I had walked the East Pier in Dún Laoghaire yesterday [1 January 2014], this was my first proper beach walk of the New Year.

We walked the full length of the beach, and close to the northern end two or three council workers were clearing away discarded Christmas trees. Why is it that the Christmas decorations are up in shopping centres long before Advent begins, but the Christmas trees come down in so many homes even before the Feast of the Epiphany arrives on 6 January?

We continued on up around Red Island, and down to the small beach behind the Lifeboat House. ‘Storm in a Teacup’ was closed, and so we walked on down the pier. A few trawlers were wrapping up the working day, a lone seal bobbed up and down expecting to be fed with fish from the trawlers, and the harbour water was so calm it was difficult to imagine that another storm is threatening. 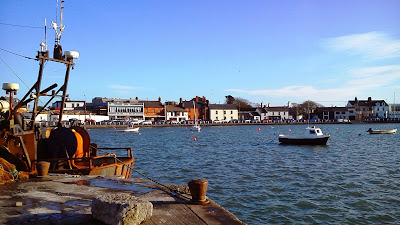 Calm waters on the harbour in Skerries this afternoon (Photograph: Patrick Comerford, 2014)

We walked on around the curve of the harbour, and after buying the Guardian and two bottles of wine in Gerry’s, we crossed to ‘The Olive’ for lunch.

The Olive has expanded in recent months, increasing the number of places available, and moving the food sales to a shop next door. But the place was still crowded, inside and out ... and yes, they still make the best double espresso in Fingal.

We make our way back to the M50 through Loughshinny, where the Yacht has reopened, Rush and Lusk. 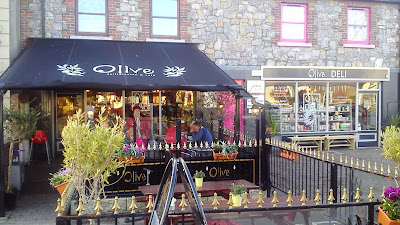 The Olive has expanded into the premises next door (Photograph: Patrick Comerford, 2014)

Posted by Patrick Comerford at 18:32 No comments:

My choice for these meditations on Art for Christmas this morning [2 January 2014] is New Year’s Festival by Kunisada Utagawa (1786-1864), a 19th century Japanese woodblock print that can be seen in the Victoria and Albert Museum, London.

This piece dates from he time Japan was beginning to reopen to the West.

Kunisada Utagawa, Utagawa Kunisada or Utagawa Toyokuni III (1786-1865) was the most popular, prolific and financially successful designer of ukiyo-e woodblock prints in 19th-century Japan, and in his own time, his reputation far exceeded the reputations of his contemporary artists such as Hokusai, Hiroshige and Kuniyoshi.

Kunisada Hiroshige and Kuniyoshi are the three best representatives of the Japanese colour woodcut in Edo (now Tokyo) the end of the Edo Period (1603–1867), before the rise of Meiji dynasty. In recent decades, Western art historians and critics have come to recognise Kunisada as one of the giants of the Japanese print.

Kunisada was born in 1786 in Honjo, an eastern district of Edo, and his given name was Sumida Shōgorō IX. His father, who was a poet of some renown, died a year after his birth.

Kunisada developed an early talent for painting and drawing, and ca 1800 he was accepted by Toyokuni I as an apprentice in his workshop.

His first known print dates from 1807. By 1808, he had started working as an illustrator of ehon or woodblock print illustrated books and his popularity rapidly increased, and he was soon considered equal to his teacher.

Kunisada was one of the trend-setters of the Japanese woodblock print until he died on 12 January 1865 in the same neighbourhood in which he had been born.

His productivity was extraordinary, with about 14,500 individual catalogued designs. He is best known for his kabuki and actor prints, and for his portraits of sumo wrestlers. His landscape prints and samurai warrior prints are rare.

Vincent van Gogh was interested Japanese ukiyo-e woodblock prints, and this interest influenced many of his paintings. I plan to look at three his paintings tomorrow morning.