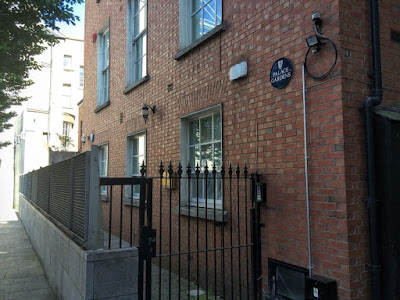 Palace Gardens seems to be one of the most unusual street names in Dublin. There are no gardens, as far as I can see, and there is no palace nearby – unless one considers the palace that may once have existed within the walls of Dublin, although that has long disappeared.

But when I took a second look at it in the sunshine this afternoon, I realised that despite the harp on the name-sign, this is not an official street name.

Palace Gardens is on the south side of Dame Street, facing onto a modern plaza opposite the Olympia Theatre and that was once graced with statues of the three graces but that are forgotten and long gone.

The apartments are squeezed between Exchange Court, running along the east walls of City Hall, and Palace Street, which leads in Dublin Castle and which sometimes competes for the title of the shortest street in Dublin. 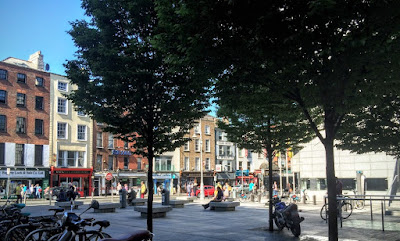 Summer in the plaza between Palace Gardens and Dame Street (Photograph: Patrick Comerford, 2016)

In these days of bright early summer sunshine, the plaza in front of Palace Gardens is filled with tourists seeking shading resting place beneath the spreading trees, and chuggers who always seem to think I have time on my hand. Nearby are some of my favourite cafés, restaurants and restaurants, including Mykonos on Dame Street and Chez Max on Palace Street.

The New Testament reading told of the Apostle Paul’s conversion on the road to Damascus and the persecutions of the Early Church in Jerusalem. It was appropriate then that the Precentor and Acting Dean, Canon Neil McEndoo, prayed for people who are suffering in Syria and the Middle East.

At least 1,000 people have died or are missing and presumed dead after a string of deadly incidents in the Mediterranean Sea over the past week, according to the International Organisation for Migration.

According to the UN, more than 2,500 people had died this year trying to reach Europe by sea – a sharp increase from the same period last year. The risk of death on the central Mediterranean route between Libya and Italy is now one in 23, according to William Spindler of the UN refugee agency (UNHCR).

About 204,000 migrants and refugees have crossed the Mediterranean since January, a figure that has also climbed acutely. The number is more than double the nearly 92,000 who landed on European shores during the first five months of 2015.

Three-quarters of those who have arrived in Europe so far this year landed in Greece before the end of March – most of them refugees fleeing conflicts in Syria and Afghanistan.

Counting all routes across the Mediterranean, William Spindler says the odds of dying while trying to cross to Europe are now one in 81.

The route between Libya and Italy, which is far longer than the one between Turkey and Greece, is particularly deadly, with 2,119 of all deaths registered this year along that route. Nearly all of those travelling on this route are from sub-Saharan Africa, particularly Nigeria and Gambia, as well as Somalia and Eritrea.

As the choir and clergy moved towards the west end of the cathedral at the end of Evensong, the evening sun was streaming through the west windows, and a prayed for a more enlightened and generous approach to refugees in Ireland and throughout Europe.

We live in an island that is a palace and a world that is a garden, and we need to be more generous in our sharing and our understanding in what are dark days for so many people. 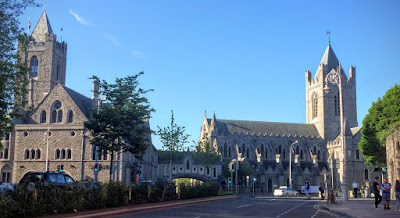 Posted by Patrick Comerford at 21:56 No comments: 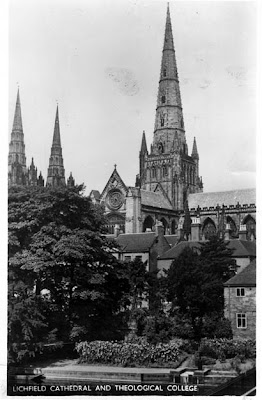 A view of Lichfield Theological College in a postcard from the early 20th century … while he was vice-principal, Geoffrey Curtis became a lifelong friend of TS Eliot (Photograph courtesy Annette Rubery)

Over the past three mornings, I was writing about the poet Philip Larkin, his family connections with Lichfield, and three poems he wrote while he was staying with his family in Cherry Orchard, Lichfield, during Christmas 1940.

However, another aspiring poet who lived in Lichfield less than a decade earlier would never blossom as a poet despite the patronage, support and friendship of the greatest living poet of his day, TS Eliot.

Geoffrey Curtis was a young priest when he arrived in Lichfield in 1932 at the age of 29 to take up an appointment as Vice-Principal of Lichfield Theological College. Some months earlier, he had sent manuscript copies of his poems to TS Eliot, and on 16 January 1932 he travelled from Lichfield to London hoping to meet TS Eliot at his offices with the publishers Faber and Faber.

Eliot eventually replied on 3 February 1932 to the note from Curtis, saying he was sorry to have missed Curtis when he was in London. He assured Curtis of their friendship but expressed hesitation about writing a preface to Curtis’s collection of poetry, which he had kept in a drawer: ‘I have not time to write more at the moment, but you are constantly in my thoughts.”

On the same day, Eliot wrote from Faber and Faber to the secretary of SCM:

I understand that a volume of Devotional verse entitled ‘Lyra Subapostolica’ by a young friend of mine, the Reverend Geoffrey Curtis of Lichfield Theological College is likely to be sent to you with a view to publication. I trust that you will not take it as an impertinence on my part if I express the hope that the volume may receive favourable attention as I have been warmly interested in Father Curtis’s poetry for several years. 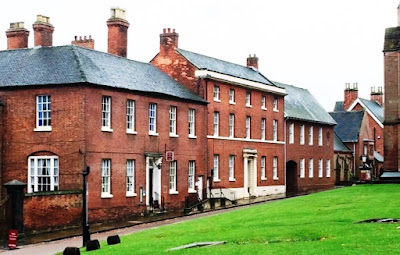 The range of buildings that once formed Lichfield Theological College on the south side of the Cathedral (Photograph: Patrick Comerford)

As far as I can find out, Lyra Subapostolica was never published by SCM, although Curtis later published biographies or studies of William of Glasshampton (SPCK, 1947) and Abbé Paul Courturier (1964), and after Curtis left Lichfield he and Eliot remained lifelong friends.

Eliot’s signed typescript letters to Curtis, spanning more than three decades from 1930 to 1964, are wide-ranging, touching on religion, poetry, writing, social engagements, professional obligations, travel plans and domestic matters, often delving into spiritual questions. The collection of about 76 letters from Eliot to Curtis is now in the Houghton Library at Harvard, and includes a letter dated 28 December 1953 enclosing an early, typescript (carbon) draft of Eliot’s poem The cultivation of Christmas trees. There are letters too to Curtis from the literary critic Frederick Wilse (Noel) Bateson (1901–1978), of Corpus Christi College, Oxford, and Mervyn Sweet.

He was ordained deacon in 1925 for the parish of Saint Mary the Virgin, Bury, in the Diocese of Manchester, and was ordained priest in 1926 by Bishop (later Archbishop) William Temple.

After Bury, he had a series of short appointments, including Vice-Principal, Dorchester Missionary College (1928-1930), and Missioner with the Charterhouse Mission at Saint Hugh’s, Bermondsey (1930-1932), before coming to Lichfield as Vice-Principal of Lichfield Theological College (1932-1933) and curate of the Staffordshire parish of Saint Mary’s, Blymhill.

In 1935, Curtis joined the Community of the Resurrection as a novice and made his profession in 1938.

His first published work was not his poetry but an edition of the Martyrdom of the Carthusian Fathers (1935). His later works included a life of the Anglican recluse William of Glasshampton (1947, second edition 1978), and a biography of his friend the Abbé Paul Couturier (1964). Curtis was a fluent French speaker and knew the remarkable abbé very well, being one of his closest Anglican friends. Writing about the pioneering Anglican liturgist, Dom Gregory Dix, he described him as ‘one of God’s greatest gifts to the Church of England.’

Geoffrey Curtis was renowned as a spiritual director, and despite never gaining recognition as a poet, he remained a lifelong friend and spiritual confidante of TS Eliot. When Father Eric Cheetham retired from Saint Stephen’s, Gloucester Road, in 1956, Eliot was worried that the liturgical tradition of Saint Stephen’s might be upset by the new priest, Father Wilfred Jennings. He approached Curtis about the matter, and Curtis advised him to move to nearby Saint Mary Abbots in Kensington High Street.

However, there were no significant changes under Father Jennings, and Eliot remained a churchwarden at Saint Stephen’s until 1959, and continued to worship there for the remaining decade of his life.

Curtis was a founding figure in the International Ecumenical Fellowship (IEF). His work for ecumenism started with his early enthusiasm for the Carthusian martyrs, and brought him throughout Europe, East and West. His meetings with Pope Pius XII and the future Pope Paul VI may well have contributed to the thaw in Anglican-Roman Catholic relations which blossomed at the time of Vatican II (1962-1965).

After early proposals for Anglican-Methodist reunion collapsed in the 1970s, Archbishop Michael Ramsey confided with Geoffrey Curtis. In a letter in 1972, he wrote: ‘What then does one do? It is very painful. But I think the call is to stay, and not to despair; because the faith in the Triune God and in the Holy Catholic Church stands as the essential rock, because the Church of England has not put itself outside the Catholic Church. So we stay, and serve the Lord painfully and joyfully. What has vanished is the idea that being an Anglican is something to be commended to others as a specially excellent way.’

Geoffrey Curtis remained a vice-president the International Ecumenical Fellowship (IEF) almost until his death. In his dying days, he was nursed at the Royal Foundation of Saint Katharine, his last home, on earth by a devoted friend, Helen Gold, once a Jewish refugee from Hitler’s Germany. When he died in 1981, Geoffrey’s life was celebrated at Saint Katharine’s, where he died, and at All Hallows by the Tower, as well as at Mirfield, the mother house of the Community of the Resurrection. 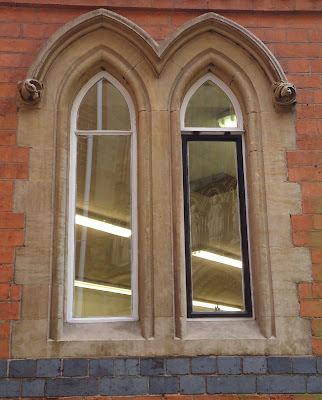