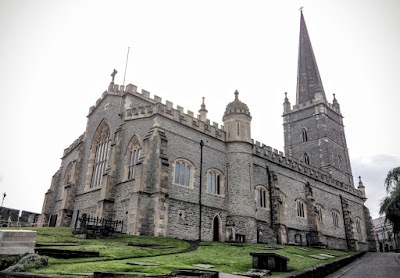 Saint Columb’s Cathedral stands on a prominent site within the Walls of Derry (Photograph: Patrick Comerford, 2016)

I was in Derry for the first time in many years on Sunday [4 September 2016] for the ordination of the Revd Suzanne Cousins as priest by Bishop Ken Good of Derry and Raphoe. Saint Columb’s Cathedral, within the walled city of Derry, is both the cathedral of the Church of Ireland Diocese of Derry and the parish church of Templemore.

The cathedral stands on a prominent site within Derry’s Walls, and is the oldest building in the city, having been completed in 1633.

The cathedral is actively engaged in promoting ecumenical and bridge-building activities and this role is reflected in the regard in which the building is held by all sections of the community. 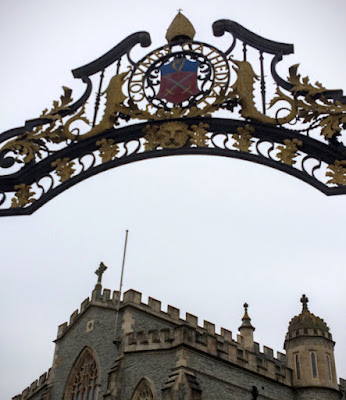 The grand gates were erected in 1933 to mark the tercentenary of the completion of the building of the cathedral in 1633 (Photograph: Patrick Comerford, 2016)

The cathedral is dedicated to Saint Columba, the monk who established a settlement in the area before being exiled from Ireland to Iona and introducing Christianity to Scotland. The original site of the cathedral was known as Templemore (An Teampalll Mór, the Big Church), which gives its name to the inner city parish.

The earlier church was damaged in an accidental explosion on 24 April 1568, when it was being used to store gunpowder.

The destruction of the church was completed during the violence of the Nine Years’ War (1594-1603). On 16 April 1600, Sir Henry Docwra entered Derry with a force of 4,000 soldiers. He tore down the ruins of the Big Church and used its stones to build the walls and ramparts of the city.

In 1613, James I granted a Royal Charter to the new County of Londonderry and the Honourable the Irish Society was established to build the city. Their plans included building a new cathedral and in 1613 the company sent a silver-gilt chalice (the ‘Promise Chalice’) and paten from London for the cathedral it planned to build. The ‘Promise Chalice’ takes its name from the promise by the Irish Society to build the cathedral.

A year later, a bell was sent from London with the inscription: ‘Fear God, Honour the King. Re-cast for Londonderry Steeple in 1614.’

Building work began in 1628, and the new cathedral was built of stone from local quarries with the work of skilled stone cutters and masons. They used from the same grey-green schist as the city walls. The old pillars and arches are testimony to their sound judgment and first-rate craftsmanship.

A small square stone tablet from An Teampall Mór in the porch has a Latin inscription that reads: In Templo Verus Deus Est Verec Colendus (‘The True God is in His Temple and is to be truly worshipped.’

The cathedral stands within the city walls and is built of the same stone (Photograph: Patrick Comerford, 2016)

The cathedral, close to the original building, was completed in 1633 by William Parrot, in the Planter’s Gothic style. It is the first Anglican cathedral built as such on these islands after the Reformation and is said to be the first cathedral outside the Roman Catholic tradition to be built in Europe.

An inscription in the cathedral porch reads:

If stones could speake
then London’s prayse
should sound who
built this church and
cittie from the grounde.

A smaller stone inset comes from the original church built here in 1164.

The peal of eight bells, which is the oldest set in Ireland, presented by Charles 1 in 1638.

A hollow mortar shell in the porch was fired into the churchyard during the Great Siege of Derry in 1688-1689. Inside the shell were the terms of surrender. 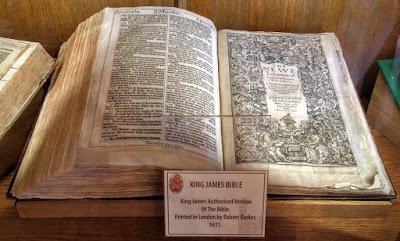 An riginal copy of the King James Bible in the Chapter House (Photograph: Patrick Comerford, 2016)

The treasures and displays in Saint Columb’s Cathedral include an original copy of the Authorised Version or King James Version of the Bible, printed in London in 1611, many documents dating from the Siege of Derry, portraits of William III, the original keys of the city and the four huge padlocks used to secure the city gates in the 17th century.

Other artefacts in the cathedral include a collection of silver Communion plate, as well as information on famous personalities associated with the cathedral, including the hymn writer Cecil Francis Alexander, the Earl Bishop and the philosopher George Berkeley, who became Dean of Derry in 1724.

The appearance of the cathedral changed little from its completion in 1633 until 1776, when the Bishop of Derry, the 4th Earl of Bristol, added 21 feet to the tower, and placed above it a very tall and graceful stone spire, giving a total height of 221 feet.

The nave of seven bays has a fine hammer-bream ceiling dating from 1823. But the nave remained as it was until 1825 when the South Porch was removed. The eastern turrets, which previously had battlements, were either rebuilt or surmounted by domes in 1827.

The interior of the cathedral was entirely re-modelled in 1861-1862. The old square pews were removed, the galleries in the aisles taken away, and the present oak work in the nave was completed. Many other improvements were made in the ornaments and furnishings of the building.

The addition of the chancel in 1887 completed the cathedral along the plan of its founders, and the foundations laid in 1633 were discovered during this building work. 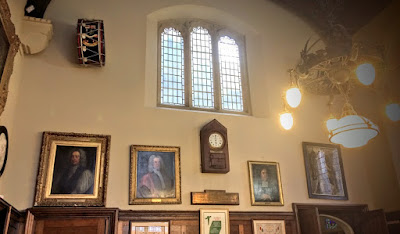 The Cathedral Chapter House was built in 1910 (Photograph: Patrick Comerford, 2016)

The Chapter House, built in 1910, was designed by Thomas Drew, provided much needed accommodation for the clergy and choir, and added greatly to the external appearance of the cathedral.

The grand entrance gates were erected in 1933 to mark the tercentenary of the completion of the building of the cathedral.

A complete restoration of the cathedral was completed in 2011.

There are three Sunday services in the cathedral: Early Morning Eucharist (8 am), Sung Eucharist (11 am, 1st and 3rd Sundays), Matins (all other Sundays), Family Service (10 am, 4th Sunday of the month) and Choral Evensong (4 pm).

On weekdays, Morning Prayer is said on Mondays, Wednesdays, Thursdays and Fridays throughout the week (10. 30 am), with a celebration of the Eucharist on Tuesdays.

The Dean of Derry, the Very Revd William Morton, is dues to be installed as Dean of Saint Patrick’s Cathedral, Dublin, later this month [24 September 2016]. The former headmaster of Sligo Grammar School, Canon John Merrick, is the NSM Curate Assistant in the cathedral. 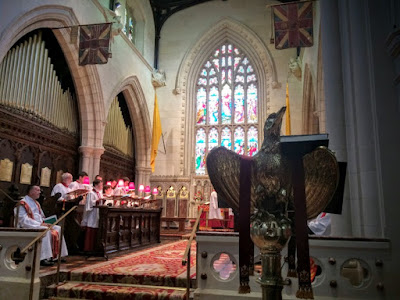