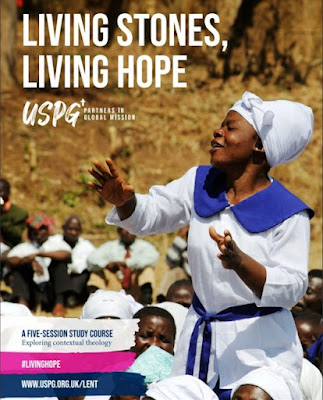 ‘Living Stones, Living Hope’ is the title of the Lent Course for 2022 produced by the Anglican mission agency USPG (United Society Partners in the Gospel). The course includes reflections from five global theologians, including Canon Patrick Comerford, who draws on his experiences of Church co-operation in Rathkeale.

The title of USPG's Lent course comes from I Peter 2, ‘Living Stones, Living Hope’. This epistle (I Peter) is the text of the Bible study for the Lambeth Conference in July 2022. In basing this Lenten study on this text, USPG is in solidarity with the bishops preparing for this important meeting in the life of the Anglican Communion.

The metaphor of the Christian community in 1 Peter 2 as living stones is rich and evocative. ‘Living Stones, Living Hope’ explores this from the perspective of five partner churches around the world, inviting us to reflect on our own experience of being ‘living stones’ bringing ‘living hope’ in our own situations.

Canon Patrick Comerford of the Rathkeale Group of Parishes is one of five international theologians contributing to this Lenten course. He writes about the experience of the Church of Ireland in the study for Week 4, looking at the impact of Brexit on a cross-border church, of the tensions that remain after the peace process, and other social and political changes in Ireland.

He also writes about the work of the three main churches in West Limerick, offering the work of the churches in Rathkeale as ‘one small example of applying our understanding’ of ‘the stone that the builders rejected.’ The project in Rathkeale seeks ‘to create understanding and a shared space for Travellers, who are a large ethnic minority in the area, and the people of Rathkeale, who fear losing their social, economic and cultural place in the town.’

He writes, ‘As the Church takes stock once again, it needs to be less worried about how it is perceived or whether it is losing credibility, and more willing to engage with these questions, even when this is costly.’ As part of the Lenten Studies, Patrick is also leading a USPG webinar on the Celtic Church on 24 March.

Canon Comerford and Bishop Michael Burrows of Cashel Ferns and Ossory are also the two contributors from the Church of Ireland taking part in USPG’s 24-hour global wave of prayer on 30 November.

Many of the 42 provinces in the Anglican Communion are joining the Anglican Communion Day of Prayer on 30 November. Canon Comerford’s contribution was filmed in Holy Trinity Church, Rathkeale, while Bishop Burrows recalls his friendships with Archbishop Desmond Tutu, Archbishop Trevor Huddleston, and Bishop Elinah Wamukoya of Swaziland, a former mission partner of this diocese who died earlier this year.

This news feature is published in the December 2021/January 2022 edition of ‘Newslink’ (Diocese of Limerick and Killaloe), p 17 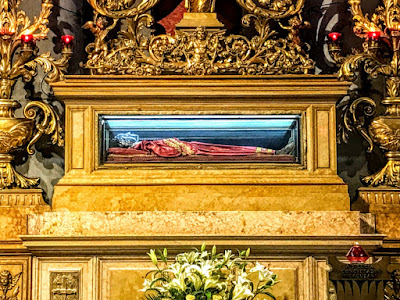 The shrine of Santa Lucia di Siracusa or Saint Lucy of Syracuse in the Church of San Geremia in Venice (Photograph: Patrick Comerford)

Christmas is almost upon us, and today I am putting the final touches to the Service of Nine Lessons and Carols to take place in Saint Mary’s Church, Askeaton, next Sunday afternoon (19 December). 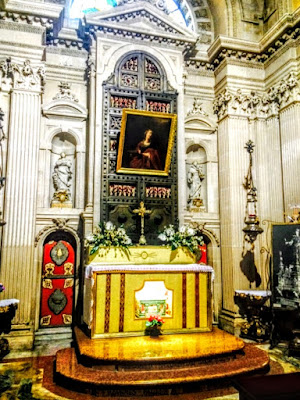 The shrine of Saint Lucy in Syracuse in Sicily (Photograph: Patrick Comerford)

I was reflecting yesterday (13 December) on the life of Samuel Johnson (1709-1784) of Lichfield. But 13 December in the Calendar of the Church of England in Common Worship also commemorates Saint Lucy, who was martyred at Syracuse in Sicily ca 283-304.

Saint Lucy’s relics are kept in a shrine in the beautiful Church of San Geremia, facing onto the Grand Canal in Venice, between the Palazzo Labia and the Palazzo Flangini. Because of her relics, the church is a popular place of pilgrimage.

Apart from her martyrdom in Syracuse in 304 during the persecution of Diocletian, we know little for certain about Lucy, although her cult began soon after her death and spread widely. An inscription dating from ca 400 is found in Syracuse. Her name appears in the First Eucharistic Prayer of the Roman Rite and also in the Ambrosian rites as well as in the oldest Roman liturgical texts, in Greek liturgical books and in the marble calendar of Naples.

There are churches dedicated to Saint Lucy can be found in Rome, Naples and in Venice, where the Church of San Geremia, near the railway station, claims to have a partially incorrupt relic of her body.

According to her Acts, which have little historical value, Saint Lucy was a wealthy Sicilian Christian during the persecution of the Emperor Diocletian. She consecrated her virginity to God, turned down proposals of marriage to a pagan, and gave away her dowry to the poor. She was betrayed as a Christian by the man who wanted to marry her to the governor of Syracuse. A judge ordered that she should be sexually violated in a brothel, but miraculously she could not be moved from where she was. He then tried – unsuccessfully – to have her burnt so she was finally executed by the sword.

In mediaeval accounts, her eyes were gouged out before her execution. Saint Lucy’s name (from the Latin word lux, ‘light’) also played a large part in her being named as a patron saint of the blind and people with eye-trouble.

Artistic representations reflect these stories in her Acts. Her eyes sometimes appear on a plate she is holding. The earliest known image of her and showing no symbols is in a frieze of virgins in the sixth century mosaics in the church of Saint Apollinare Nuovo in Ravenna.

At first, her body was kept in the Church of San Giorgio Maggiore, on the island of the same name opposite Saint Mark’s Square. Boats carrying pilgrims from Syracuse capsized in rough seas in 1279, and some pilgrims were drowned. It was decided then to transfer her relics to a church in Cannaregio. This church was named Santa Lucia and was rebuilt by Andrea Palladio in his Palladian style in 1580.

When Palladio’s church was demolished to make way for the new railway station, her body was moved to San Geremia in 1861. This new train station is still named Santa Lucia.

In their confusion, the thieves left behind her head and the silver mask. They demanded a ransom, but local police retrieved her body in the lagoon area of Montiron and she was returned to the church on her feast day, 13 December. Although her body has now has been in Venice for many centuries, the city of Syracuse where she was born still claims her body.


In Scandinavia her feast, held on what was the shortest day of the year in the old calendar, has become a festival of light. The youngest daughter in the family, dressed in white, wakes the rest of the family with coffee, rolls and a special song.

In Sicily and in many other places the song ‘Santa Lucia’ remains enduringly popular. 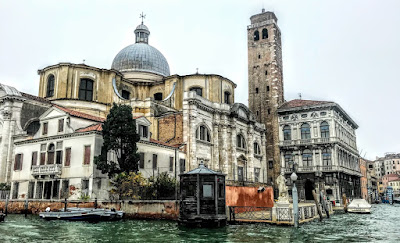 San Geremia and its great dome seen from the Grand Canal … the church houses the relics of Saint Lucy since 1861 (Photograph: Patrick Comerford)

[Jesus said:] 28 ‘What do you think? A man had two sons; he went to the first and said, “Son, go and work in the vineyard today.” 29 He answered, “I will not”; but later he changed his mind and went. 30 The father went to the second and said the same; and he answered, “I go, sir”; but he did not go. 31 Which of the two did the will of his father?’ They said, ‘The first.’ Jesus said to them, ‘Truly I tell you, the tax-collectors and the prostitutes are going into the kingdom of God ahead of you. 32 For John came to you in the way of righteousness and you did not believe him, but the tax-collectors and the prostitutes believed him; and even after you saw it, you did not change your minds and believe him.’

The Prayer in the USPG Prayer Diary today (14 December 2021) invites us to pray:

We pray for a world in which women and men are safe from violence and abuse. 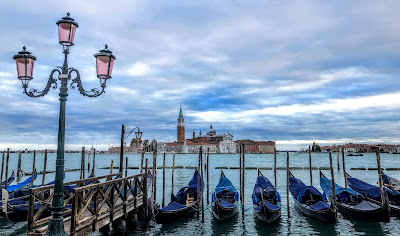 San Giorgio Maggiore in Venice … the relics of Saint Lucy were moved from there after a drowning tragedy in 1279 (Photograph: Patrick Comerford, 2021)