Rathfarnham arch under threat once again 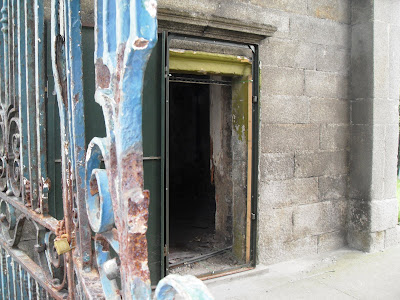 The doors in the Ely Arch in Rathfarnham have been forced open, and the site is neglected and decaying once again (Photograph: Patrick Comerford, 2011)

It is only a few weeks since I wrote in a posting on 20 July that the Triumphal Arch on the banks of the River Dodder at Rathfarnham has already fallen victim to graffiti vandals, only months after its cleaning and renovation.

The Triumphal Arch was cleaned and renovated in recent months. But I wrote just over ago of being disappointed to see that this monument to the Loftus family of Rathfarnham Castle, once neglected and in danger of crumbling, is already falling victim to graffiti vandals.

After the recent renovations, builders’ rubble and fencing was left strewn around the site. The rusting gates were never painted. And now the graffiti on its walls are spreading.

The Ely Arch in Rathfarnham ... covered in graffiti and vandalised only a few months after renovation work (Photograph: Patrick Comerford, 2011)

On my way home from work last night, I walked by the arch again. This time I was saddened to see that the padlocks recently fixed to the two doors within the arch have been smashed, the doors have been broken open, and the interior of the arch is now exposed to the weather. 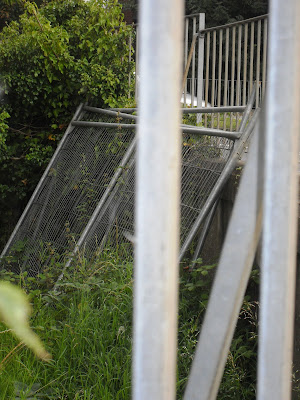 Builders’ rubble and fencing have been abandoned on this tiny site (Photograph: Patrick Comerford, 2011)

If remedial action is not taken immediately, all the work of recent months will be undone, and what remains of the interior of this sad building is facing destruction.

The gateway was erected in 1767 by Henry Loftus, Earl of Ely, who was also responsible for the classical redesign of Rathfarnham Castle. The arch is named as the new gate on Frizell’s map of 1779.

After the division of the estate in 1913, the arch became the entrance to the Castle Golf Club, but was later abandoned in favour of the more direct Woodside Drive entrance.

The area around the arch is a haven for wildlife, with the River Dodder home to brown trout, otters and water birds.

I walked on along the banks of the Dodder, where a few walkers were enjoying the late summer weather and a lone angler was failing to catch any fish. A pair of swans swam closely together at the weir below the bridge.

This is a beautiful corner of Dublin, and the local authority must pay more attention to our heritage here. We are approaching the 250th anniversary of the erection of the arch – I hope it’s still standing in 2017, and that it’s fully renovated. Is it too much to ask that it might be fully restored and open to the public?

Posted by Patrick Comerford at 06:30 9 comments: