Picking blackberries near the beach in Kilcoole

It may be past Michaelmas, but the blackberries are still in full fruit (Photograph: Patrick Comerford, 2010)

It’s half a century since I last walked the beach in Kilcoole. Oh, I was there about two years ago one dark winter’s evening for a funeral, and I’ve passed by on the train between Wexford and Dublin. But this afternoon, for the first time in 50 years, I had stroll along the beach in Kilcoole.

I still recall that holiday I had there when I was only an eight-year-old. It was 1960, and my father liked to spend summer holidays near a beach and a golf course and a beach in places that were still within commuting distance of Dublin.

In my memory, I still seem to have spent most of my summer holidays on my grandmother’s farm in West Waterford. But that summer in Kilcoole still stands out in my memory. It was the first house I recall staying in that had a piano. I remember the sun porch, and I remember as a boy filled with curiosity reading the Bible, Pilgrim’s Progress, Foxe’s Book of Martyrs and Robert Louis Stevenson’s Kidnapped during that holiday.

Perhaps they were only children’s versions – I can’t be sure. I was not being precocious – at the time I remember being shy and being vulnerable to attacks of hay fever that left me with bloodied noses. But those books filled me greater ideas that I would draw on later in life.

Behind the house, an old beaten track led up to a ruined house. In our imagination it was a castle that had been burned down, and in the dusk of the evenings we could see the bats flying around in the cooling summer air.

It was an adventure to walk down to the beach each day – a rickety little gate warned us to be careful as we crossed the railway line. As children, we loved to stop and wave at passing trains, but were we not warned about standing too close to the line in case we risked being sucked in?

In the years that followed, I passed by Kilcoole regularly on the Wexford-Dublin train, but I never saw children standing on the rocks waving at the trains. Later, Kilcoole became known as the location for Glenroe, and has since expanded as a commuter – almost a suburban – town.

The old gate before the foot crossing at the railway line is still there. I never realised the beach was so lengthy or that it stretched so far. Despite the October evenings drawing in, it was still warm this afternoon at 19 degrees, and I left my coat, hat and scarf in the car. The waves were trundling in, and despite the haze created by the easterly breeze, the scenery was spectacular. A few mothers stayed with their children close to the railway crossing, but as I walked south by the Murrough, I was reminded of the Fens around East Anglia. 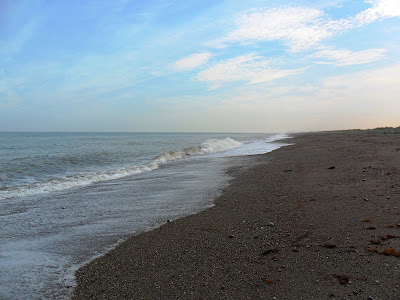 The waves were trundling in onto the beach at Kilcoole this afternoon (Photograph: Patrick Comerford, 2010)

And so I set out looking for that holiday home of half a century ago. I knew as I walked from the beach west towards the village that the house should be on the north or right hand side of the narrow road. I seldom fail at much these days, but I failed to find that house this afternoon, or the ruins where we once watched the bats in those closing summer evenings.

I recognised some of the other houses and cottages. But I was not disappointed

Instead, I ended up picking blackberries on the brambles and briars in the ditches and hedgerows on the side of the road as I made my way back to the car park by the railway line. The sound of waves boomed away to the east; a lone woman had left her saddle on a gate as she headed off through a field towards her horse; the mothers and their children were heading back from the beach to the suburban village.

It was too good an afternoon to waste. A few miles north in Greystones, I was smothered by choices for a place to have a late afternoon coffee. Bochelli on Church Road was welcoming, and the espresso was excellent. For a restaurant like this to warmly welcome two customers in search only of a coffee is a sign of perfect customer attention.

Once again, I crossed the railway line, and had my second beach walk of the day on the South Beach in Greystones.

I was at Sting’s concert in the O2 last night. My lungs have not been behaving properly over the last week, and I was conscious that my coughing could disturb others – it’s easier to live with sarcoidosis if you don’t interfere with others’ on evenings like this. But then, he did remind us in one of his closing songs How fragile we are.

A reminder of human fragility ... the waves beating the South Beach at Greystones, Co Wicklow, this afternoon (Photograph: Patrick Comerford, 2010)

Walking along the South Beach, as the waves tumbled in and battered against the rocks and the sand, I was reminded of how fragile we all are – but it’s fragility in the face of God’s creation, and I felt this afternoon he was holding me in the palm of his hand. I may have sarcoidosis, but sarcoidosis does not have me. And so I headed home happily to have those blackberries from Kilcoole with some ice cream and a fine glass of Trebbiano d’Abruzzo.
Posted by Patrick Comerford at 20:47 2 comments: