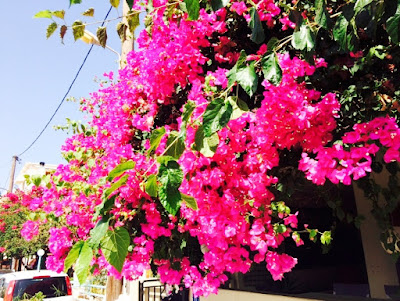 Bougainvillea covering the balconies of a house on the way to the beach in Platanes (Photograph: Patrick Comerford, 2015)

It is fair to describe the old road out of Rethymnon that runs through Platanes as a tourist strip.

But it is only a long strip of land, and I only have to stray a few metres to find reminders that this remains essentially a rural part of the countryside of Crete.

The short walk from Julia Apartments to the long golden sands of the beach takes me along a narrow road where the balconies of houses and small hotels are dripping with bougainvillea and hibiscus. 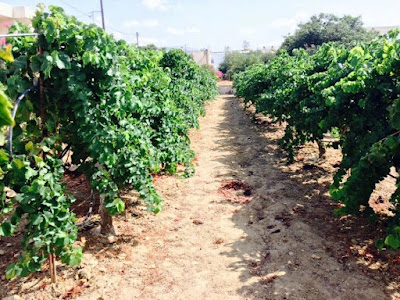 A small vineyard, by one of the side-roads between Platanes and the beach (Photograph: Patrick Comerford, 2015)

Along the way, there are still open patches of land where goats graze or seek shelter from the heat of the summer sun in the shade of an old olive tree, and in the side paths I find small vineyards, groves of citrus trees, gardens with apricot and pomegranate trees, tomatoes, peppers, gourds and melons. 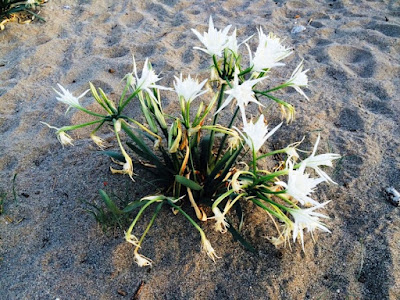 Down on the beach, every effort is made to protect the trees and to encourage the small flowers that thrive in the sand, such as the Sea Lily (Pancratium Maritimumn) that grows around the Mediterranean coast. It is also known as the “Sea Daffodil,” “Lily of Saint Nicholas,” and “Narcissus of the Sea.” 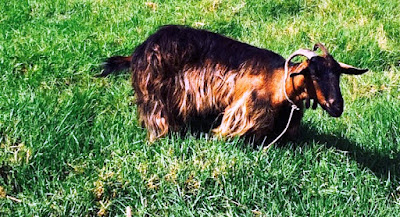 A goat grazing on open green patch between the road and the beach (Photograph: Patrick Comerford, 2015)

I have no need to go up into the mountain villages above Platanes to be reminded of the beauty of rural Crete. Here are some more photographs from this green area between the resort and the beach, without any further commentary: 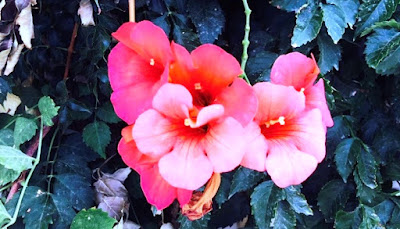 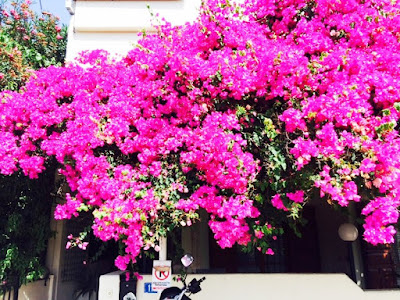 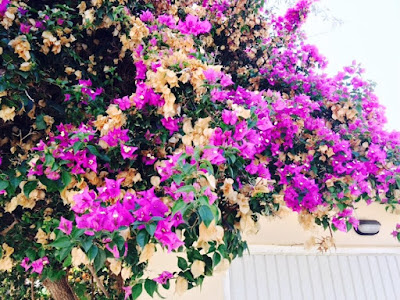 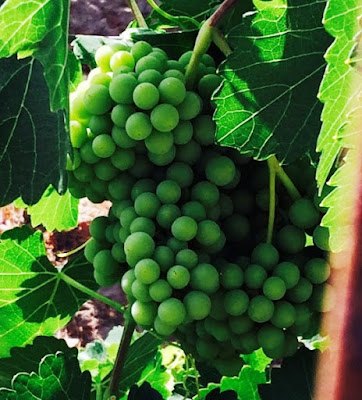 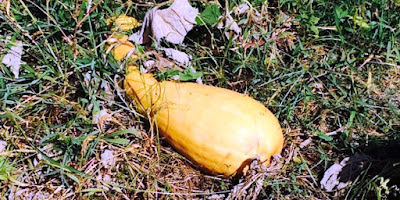 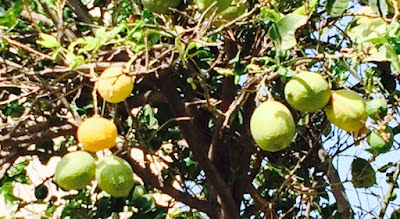 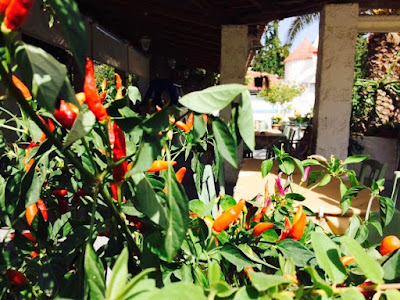 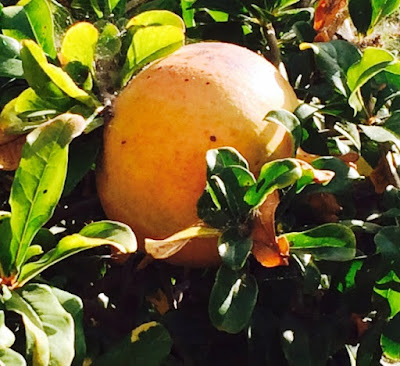 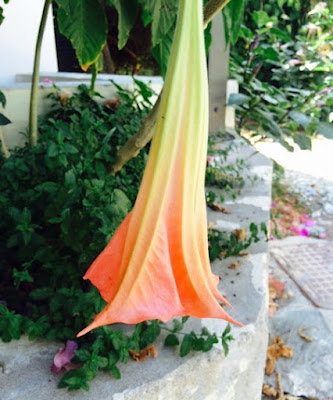 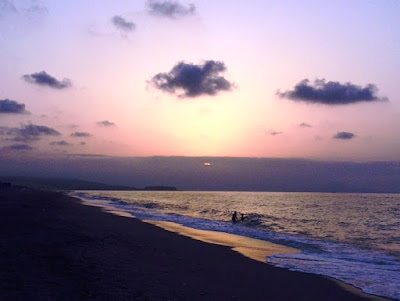 Enjoying the sea and the sand at Platanes beneath the sunset last night (Photograph: Patrick Comerford, 2015)

Before the evening closed in, I went for walk on the long sandy beach that is only a five-minute walk from Julia Apartment, where I am staying in Platanes outside Rethymnon.

By 7 p.m., most of the swimmers and sunbathers have left the beach, the sunbeds have been hosed down or stacked away, and the sand is being raked over or watered down so that the place is clean for the following day.

Here and there, there were one or two people still lingering on a sunbed, deep in conversation that it was easy to imagine had continued since the afternoon. Two young men were playing with small bats and a tennis ball, delighted that each time one of them missed the ball the waves would bring it back in to the shoreline.

Further on, a young couple had come for an evening swim. As they danced in and out of the water in the light of the setting sun, as if this was their secret seashore, and that no-one else was nearby. 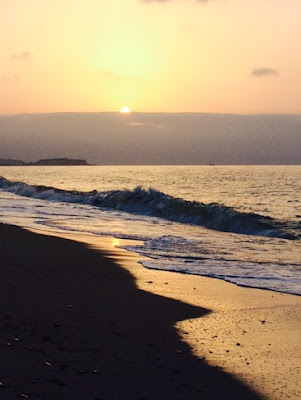 The shoreline at Platanes as the sun sets behind Rethymnon (Photograph: Patrick Comerford, 2015)

Out in the sea, the “pirate ship” Barbarossa had sailed out from the old Venetian harbour in Rethymnon and was starting its evening sunset cruise.

To the west, over the Fortezza in Rethymnon, the setting sun seemed to tarry awhile above a set of large clouds – the first real clouds that I have seen all this week in Crete.

Mediterranean sunsets are far more dramatic than most sunsets in northern Europe, and every now and again I could glimpse the bright red balloon in the thin streaks that broke between the cloud formations.

There were golden brown and deep blue and silver shimmers of sunlight on the sand and water. I lingered and was reluctant to leave. It all lasted for about 20 or 30 minutes, but no more.

As darkness fell, the lights and the music were tuned on in the bars, cafés and restaurants in Platanes.

A popular song in every restaurant, and one that every tourist hears without ever learning the words, is a setting by Mikis Theodorakis of the poem Άρνηση (‘Denial’) by George Seferis known to every Greek by its opening words, Στο περιγιάλι το κρυφό (On the Secret Seashore).

The poem was first published by Seferis in his collection Turning Point (Στροφή) in 1931. After the colonels seized power in 1967, Seferis went into voluntary seclusion and many of his poems were banned, including the musical versions that Theodorakis had arranged. ‘Denial’ became an anthem of resistance to the regime and was sung by the enormous crowds lining the streets at Seferis’ funeral in 1971. 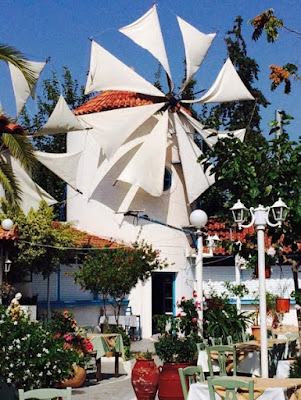 One of the windmills at Myli in Platanese (Photograph: Patrick Comerford, 2015)

After a walk on the golden sand, two of us went for dinner in Myli on the main road that runs through Platanes.

Earlier in the day I had been photographing the windmills and the watermill at this restaurant, and we found a table by the watermill, with the refreshing sound of the mill water beside us as we dined.

This restaurant opened 2011 but seeks to be an ambassador for traditional Greek cuisine. An introduction on the menu says: “This effort is dedicated to my grandfather Yiorgos, my grandmother Stella and her sister Anroniki who built this house and lived here all their lives.”

They came from a long line of windmill owners in Smyrna (Izmir) and settled in this place after the horrific destruction of the Greek city in Anatolia by Ataturk in 1922.

The pages of the menu have unusual citations from a disparate variety of sources, such as Hamlet:

Oh, what a rogue and peasant slave am I!
Is it not monstrous that this player here,
But in a fiction, in a dream of passion,
Could force his soul so to his own conceit
That from her working all his visage wanned,
Tears in his eyes, distraction in his aspect,
A broken voice, and his whole function suiting
With forms to his conceit? And all for nothing—
For Hecuba!
What’s Hecuba to him or he to Hecuba
That he should weep for her? What would he do

Yes, it breaks off in mid-sentence, without completing Hamlet’s words:

Had he the motive and the cue for passion
That I have? He would drown the stage with tears
And cleave the general ear with horrid speech,
Make mad the guilty and appal the free,
Confound the ignorant, and amaze indeed
The very faculties of eyes and ears.

On another page of the menu, there was a quotation from the controversial Greek philosopher Dimitris Liantinis:

The Hellenic way of existence denotes four types of behaviour.
To accept the truth that derives from nature not the quasi-truth that the human mind creates.
To live according to the morality of knowledge, not the morality of superstition.
To deify beauty because beauty is as mighty as your mind and as corruptible as flesh.
And what is most: to love man.
How else!
Man is the most tragic being within the universe.

In the original, he writes:

Liantinis became popular in Greece after he went missing in strange and never-explained circumstances near Sparti on the morning of 1 June 1998. He was 56, and it is thought he completed suicide on the mountains of Taygetos. In a letter to his family he wrote: “I go away by my own will. I disappear standing, strong, and proud.” His body was eventually found in a cave seven years later in 2005.

But the food and setting were was anything but morose.

Meanwhile, the sound of traditional Cretan music was seeping across the street from another taverna, Vergina, and could be heard above the dripping water of the water mill. The night was young for those who were dining out and listening to music. 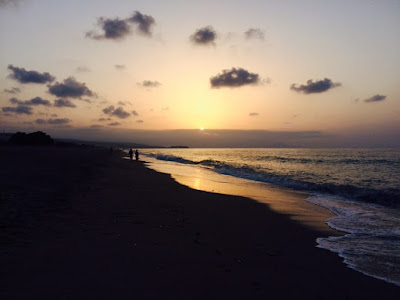 Posted by Patrick Comerford at 07:37 No comments: